I again don’t run parkrun and again we end up in the Jukebox café afterwards. Then we head down to Daventry where we have rented an industrial unit that some bright spark has kitted out with dog agility equipment and a carpet surface just like the one they use at Crufts. So our team who are at Crufts on 8th March all go down for a spot of practice.

It goes well, apart from the almost sub-zero temperatures and negligible heating in the unit. L joins us, mainly to keep an eye on Doggo and also the car which has now lost the tailpipe off it’s exhaust and sounds a bit like a F1 car.

In the evening we are at Broadway for 'Three Billboards Outside Ebbing, Missouri'.

The action takes place in the remote community of Ebbing, Missouri and a pretty miserable downbeat community it is. Mildred Hayes (Frances McDormand) has plenty of cause to be miserable. She works in an bleak gift shop but that isn't why she is miserable. Her daughter Angela was raped and murdered seven months ago. Now she lives with her depressed son Robbie (Lucas Hedges) while her husband Charlie (John Hawkes), who blames her for their daughter murder, has left her to be with Penelope (Samara Weaving), a woman half his age who works at the local zoo. To cap it all the town’s dwarf (Peter Dinklage) has a crush on her. 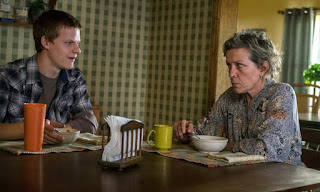 Frustrated with the police, who have made no progress on the case, Mildred rents three unused billboards on the edge of town and puts up billboards which read ‘Raped While Dying’, ‘And Still No Arrests?’, and ‘How Come, Chief Willoughby?’. 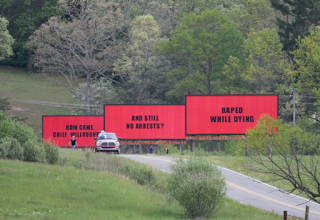 This has the desired effect, puts the wind up the police and attracts the attention of the local media. Yes while police chief Bill Willoughby (Woody Harrelson) manages to retain his cool, his inept and racist deputy Jason Dixon (Sam Rockwell) takes offence. 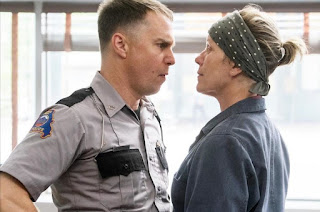 He takes his ire out on Red Welby (Caleb Landry Jones), the businessman who rented Mildred the billboards, and arrests her friend Denise (Amanda Warren) on a trumped up charge.

The billboards also upset the townspeople and with Willoughby openly suffering from terminal cancer they too are less than happy with Mildred. 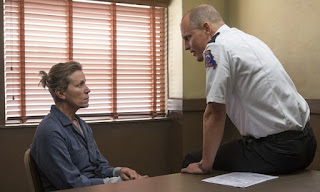 She is hauled before the police herself when she strikes out in frustration at her dentist. Then after interviewing her, Willoughby, another one who has a partner almost half his age, goes for a final romantic fling with his wife Anne (Abbie Cornish) and then kills himself before his cancer does the job. Although not before first paying for another month’s rental on the billboards.

When the billboards are destroyed by arson, Mildred retaliates by chucking Molotov cocktails at the police station and from an impressive distance. Unexpectedly Dixon is inside, rethinking his attitude, career and life after being left a letter by Willoughby and fired by Willoughby's replacement. He ends up sharing a hospital room with Red who is recovering from the injuries Dixon inflicted on him.

Suddenly becoming the nice guy Dixon reckons he has a lead on who killed Angela but when it it turns out the man has an alibi, Mildred and Dixon together conclude that the man must be guilty of some other attack and set together to kill him anyway...

It is a wonderfully complex film in which there is an awful lot going on. It is full of action, (black) comedy, poignancy and rage (plenty of rage). It’s very Coen-ish and incidentally stars Coen favourite McDormand, who brilliantly plays a woman weather beaten and worn down by life. It is her best performance since Fargo.

Probably the film of the year, already.