Today is the third running of my dog club's Championship Agility Show, which is a very high profile thing for us, and it again goes really well. Unless you're MD that is. He doesn't get any clears today sadly and this is our last competition before Crufts.

It's a long day but I'm home in time for us to hit the cinema in the evening and a spot of Downsizing.

Paul Safranek (Matt Damon) and his wife Audrey (Kristen Wiig) have a pretty typical existence, living from day to day, struggling to make ends meet etc. So when a college reunion comes around and they meet some old friends who have taken advantage of new technology that has enabled them to downsize they are intrigued. Downsizing in this sense means literally being reduced to being a few inches tall and they are now living in the Leisureland community of the shrunken. 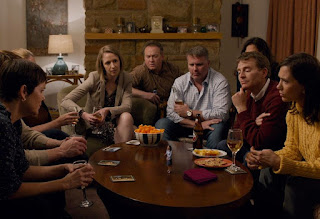 It’s win-win for everyone. Mini people take up less space on a crowded planet and consume less, conserving resources as well. It also turns out that the exchange rate in Leisureland is pretty phenomenal and so everyone lives like rich retirees whatever their age. So Paul and Audrey decide to go for it.

What is great about the film is all the thought that has gone into the downsizing process itself. From detailing the discovery of the technology to showing the actual mechanics of it being done, which involves shaving off body hair and removing teeth to have them replaced later with new smaller ones. For which they have medical teams at either end, large and small, working together. It is actually eerily convincing.

The only problem for Paul is that Audrey bottles out at the last minute and instead files for divorce. The heartless ***. If this sort of thing really was possible then I’d be looking forward to the new adventure with my other half. So it would have been nice to see where that story would have gone but Paul is cut adrift by his wife and so is the film.

The film quickly needed to find him a new partner in arms to explore this new world with but instead all he gets is a dodgy neighbour called Dusan (Christoph Waltz) and it’s not even close to being enough.

Not only does Paul's wife take herself out of the film but pretty much everyone else from the first half hour is also stranded in the ‘big’ world which is then abandoned completely spawning a totally different film for the second half.

The second half stays in the ‘little’ world, so this world becomes the norm and it is painted as just like the ‘big’ world they have left behind with the same problems and imperfections. Which may be the point but it’s like they simply forgot to write the rest of the story and there is no longer anything clever or inventive about the film.

Instead Downsizing bangs on about the poor and the environment and rapidly falls apart despite Ngoc Lan Tran (Hong Chau), a girl from the poor community, gallant attempts to save it.

It is very disappointing that a film that had such a great premise simply doesn't deliver on it.