On Sunday we are again at Broadway for 'The Darkest Hour'.

The Darkest Hour here is Winston Churchill’s, with Hitler’s forces poised across the Channel ready to invade in May 1940, and his darkness lasts considerably longer than an hour.

Churchill (Gary Oldman) finds himself not only up against Hitler but also most of parliament who don’t approve of him, his vision or his motives. Many still wanted appeasement and are agitating for a deal with Germany particularly the recently deposed Neville Chamberlain (Ronald Pickup). 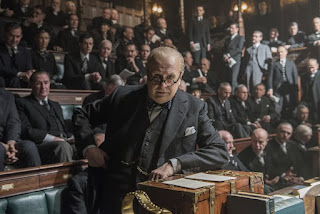 Chamberlain wants fellow appeaser Lord Halifax (Stephen Dillane) to be his successor but Halifax doesn’t fancy the job and they are forced to turn to Churchill as he is the only man the other political parties would support. On the bright side it is a job that comes with a cutesy young WAAF secretary (Lily James). 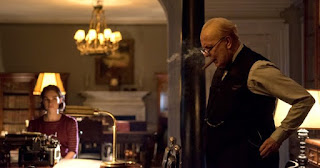 Once in power, Churchill refuses to negotiate for peace while everyone thinks he is mad for thinking that he can beat the Germans particularly with all the Allied forces currently heading for defeat at Dunkirk. They think he’s even more insane when, against all advice, he orders a suicide attack from Calais as a distraction while Dunkirk is evacuated. 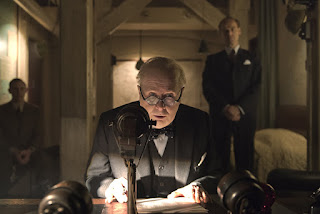 Meanwhile he allows Halifax to send word via the Italians that Britain might be interested in negotiating but only because Halifax and co are planing on resigning from the government, probably triggering a vote of no confidence, if they don’t get their way. 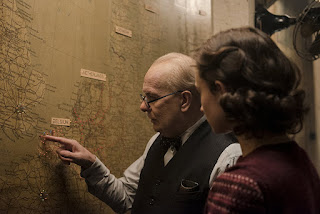 However King George VI (Ben Mendelsohn) unexpectedly visits Churchill and backs him, mainly because he doesn’t want to be exiled. Then Churchill bizarrely asks a group of passengers on the London Underground what they think. Did that really happen? Doubt it. 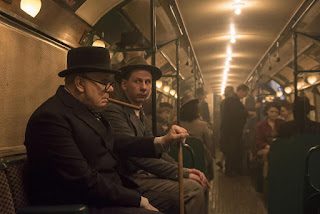 When he realises that the public support him, as do his back benchers, and then when his evacuation of Dunkirk is success even Chamberlain swings behind him as he emerges from the darkness.

It’s a good film but an odd one. I can’t say I learnt anything new and it really covers far too short a period, in my opinion anyway. Gary Oldman is decent as Churchill but then have so many great actors over the years. A bit of a disappointment really.
Posted by FitForNothing at Sunday, January 14, 2018