This morning I take the Lad for his first morning stroll. He didn’t want to go at first but he quickly got the hang of it. This is on the old ‘Doggo’ route, so in some ways it’s a bit of a tear jerker and like Doggo, I think he’s going to be a sniffer.

L takes him for a walk first walk with her in the evening. I remind her to open the wine to breathe before she goes out.

Tonight, I make the long-ish drive up to Leeds because Feeder are out on a big tour to celebrate the 21st anniversary of their first release, 25 years of existence and last year’s ‘Best Of’ collection. They have promised to dig deep into the ‘Best Of’ to dust down some of the classics they haven’t played for many a year.


I’d booked tickets for the ‘warm up’ show in Lincoln last week to see if they were going to make good on that promise but sadly that show was snowed off. So instead, with tickets already for Nottingham's Rock City on Friday, I thought an extra trip to Leeds was in order and because I also suspect the Academy in Leeds will get a longer set than curfew crazy Rock City.

The support bands are Sweet Little Machine and Team Picture. Feeder have been offering their support slot up to local bands and tonight they have teamed up with Kerrang! Radio to offer two of them. 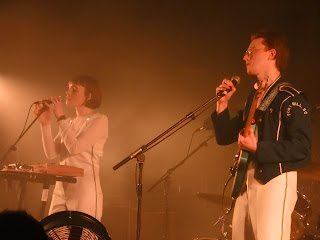 I miss the former but the latter, dressed as some sort of toy soldiers, are eclectic knob twiddlers and guitar pedal geeks if you like creating an almost psychedelic sound. It’s a slightly obscure mix of sounds that might take them somewhere but might not. Good luck to them.

Feeder meanwhile don’t disappoint, playing 24 songs and clocking five minutes over two hours on stage. This was the biggest Feeder show I've ever seen. Of course they played all their big hits as usual and opened with ‘Feeling A Moment’. Never a great favourite of mine and I’ve never been too sure about it as an opener either but I guess it gets it out the way. From there onwards they really rocked. 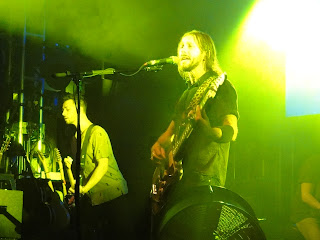 The crowd took a while to get going but they got there eventually. The big question though was what were the band going to dig deep for. Sadly there isn’t time in the set to give new mini album ‘Arrow’ a fair hearing and only ‘Figure You Out’ features but you can’t have everything.

The first nugget of gold was ‘Piece by Piece’ which is so rare that despite being a serial Feeder gig goer I’ve never heard them play it live before. Criminally it wasn't even played on the Echo Park tour despite coming from that particular album, so it has been a very long time coming. It was just WOW. 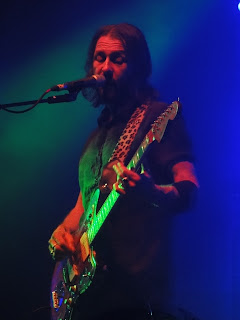 However the main meat of their back catalogue digging came towards the end of the main set, after the band had done another first and taken a mid-set siesta after playing ‘Tender’ or was this just to get Grant Nicholas’s cat Bamboo up on the big screen. Don’t ask.

The meaty highlight was a trio of tracks back-to-back from the bands début full LP ‘Polythene’ from 1996. First was punchy début single ‘Stereo World’, then the illusive legend that is ‘My Perfect Day’ which was dedicated to Jon Lee and then my beloved ‘Cement’. ‘Cement’ being the track that got me into Feeder all those years ago and unheard live by my ears since 2001 (that 'Echo Park' tour again) where incidentally they also played ‘Stereo World’ before retiring it. It was so terrific to hear both live again after 17 years. 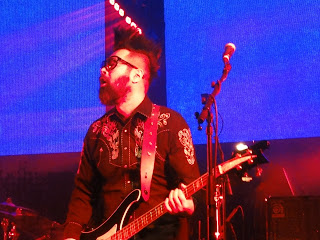 The Polythene pair were included in an audience vote for which only hard core fans need apply along with Silent Cry’s 'Who’s The Enemy' from 2008. A rather unfair choice as the excellent but not well known ‘Who’s The Enemy’ could do with the exposure.

After the usual jump around to ‘Buck Rogers’ the band return to play a five song encore that really wound the 'casuals' up who had been shouting for the closing ‘Just A Day’ since about the third song of the evening. We all love a bit of ‘Just A Day’ of course but sometimes you wish they're throw it in early so then the rest of us can then enjoy the rest of the set in peace. 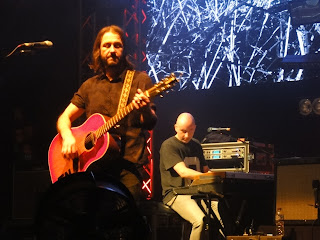 First Nicholas aided by Tom Gleeson on guitar played an acoustic ‘Silent Cry’ before Dean Deavall joined them to add keyboards to ‘Children of the Sun’. The pace is gradually being ramped back up and next is the always epic but not always present ‘Yesterday Went Too Soon’. It is immense, as ever.

Now guys you can go mental to ‘Seven Days in the Sun’ and ‘Just a Day’.

It was possibly the best set I've seen Feeder do for 15 years and well worth the long drive. Now to Nottingham, where sadly they may have to trim the set a little due to the strongly enforced early curfew there.
(Tuesday 13th March)
Posted by FitForNothing at Tuesday, March 13, 2018