Friday I am in London for work and then Saturday, L does Forest Rec Parkrun while I rest my legs and exercise the dogs. Although with just two weeks to go until the London Landmarks Half Marathon, I do desperately need a training run. So on Sunday the honour falls on the Fradley 10K. It’s ideal really, it’s quite local and easy to get to. It may be two loops but beggars can’t be choosers.

L has done it before. She says she remembers getting lettuce and a Florette face flannel in her goody bag. We’ll be hoping for something more useful this year then.

It goes relatively well. 46:06 isn’t great but it isn’t a disaster either. They have bacon sandwiches and the Lad has a great time.

In the evening we go see Red Sparrow, a spy thriller which has attracted a lot criticism. This allegedly perverse ‘15’ certificate film has been accused of being both violently and sexually perverse with woman beaten and raped seemingly at will by powerful men.

Perhaps I need to re-watch it to see what I missed but I do remember they’d left out the hair brush scene (thankfully). That would have caused even more of a stir. 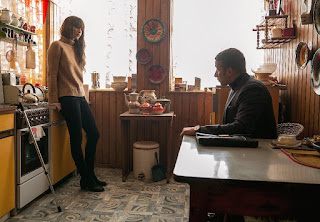 The story goes like this. Dominika Egorova (Jennifer Lawrence) was a ballerina at the Bolshoi whose promising dancing career was ended by injury. Sadly her dancing also funded the care for her ailing mother.

Not to worry, her uncle Ivan (Matthias Schoenaerts), who works in Russian intelligence, offers her work to help her get by. It is just a small favour he requires, for her to be the honey in a trap that is to be sprung on a Russian politician. She does the favour and does a rather good job, although it probably goes a little bit further than she would have hoped. Then just as the politician is having his way with her, he is murdered.

Unfortunately she’s now in a bit of a pickle because she’s seen too much. She is told she can either die or start working for Russian intelligence herself. Tough choice that.

So her uncle sends her off to Sparrow School where Matron (Charlotte Rampling) teaches the recruits to use the skills of sexual seduction to get what they want from the enemy.

Once graduated, Dominika is sent to Budapest to meet her target, Nate Nash (Joel Edgerton), who works for the CIA and knows the identity of a Russian mole known as Marble. However, Nash quickly sees through her and the long and short of it is that he persuades her to become a double agent.

I was a fan of the book even though it was at times convoluted and hard to follow, so a simplification was required for it to work as a film and that doesn't happen. In fact what we have here is an even more convoluted plot.

The other problem is where is the seduction? There’s a total lack of chemistry between the two agents. For someone supposedly trained in seduction, Dominika doesn’t pull any tricks out of the locker for him. In the book they have a conflicted relationship due to the nature of their jobs but a relationship nonetheless, here they eventually have a quick bonk. It's not quite the same and where was the swimming race? That was one of my favourite bits. 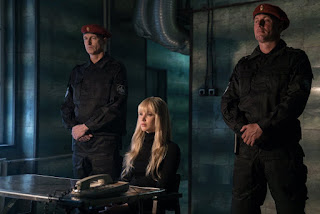 Instead the script seems to demand that all the Russians must be portrayed as ice men and ice maidens. So Lawrence goes through the entire film wearing only one expression, one of indifference, while Edgerton goes about attempting to be the all American hero.

In fact Lawrence seems hugely miscast in this but then so too are the likes of Charlotte Rampling, Jeremy Irons, Joely Richardson and Ciaran Hinds. Were there no genuine Russian actors available the weekend that they did the casting?

There is also no back story to the Russian mole which was pivotal to the original story, instead the film just seems overloaded with violence. It’s all deeply disappointing.

This would have made a wonderful independent flick or even a mini series but Hollywood completely wrecked this one.