Another lazy Saturday. I’ll miss these when the dog show season starts.

It will have to be after tonight’s film ‘Moneyball’.

In 2001 the Oakland A’s baseball team lost to the New York Yankees in the divisional playoffs. This wasn’t surprising considering the payroll of the Yankees was triple that of the A’s. It’s a situation that isn’t going to change either and the A’s are set to lose three of their star players to teams who can afford to pay more for their services.

The general manager of the A’s, Billy Beane (Brad Pitt), and his scouts start debating who they can recruit to replace them. 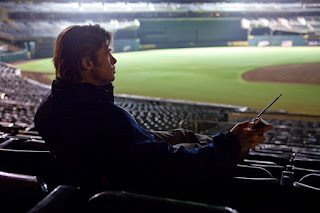 Beane is not impressed with any of the options and realises that in order to compete, they need to totally re-think the way they recruit players. Then, by chance, he stumbles across Pete Brand (Jonah Hill), an economics graduate working for another team who believes he has a better system. A system purely based on statistics. A system that didn’t care if a player was too old, spent all his time in strip clubs or if his girlfriend wasn’t photogenic enough, provided he got the runs. 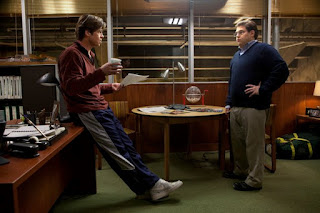 Beane recruits Brand to be his assistant and then much to the annoyance of his scouts, they go about recruiting new players based on data not scouting, even the ones who frequent strip clubs and have ugly girlfriends. 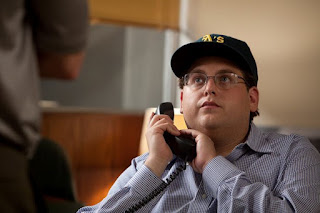 Another person who was unimpressed by this was Art Howe (Philip Seymour Hoffman) the team's head coach and he refuses to pick the players that Beane and Brand have bought for him. When the club embark on a disastrous start to the season, everyone blames Beane’s purchases but the two of them refuse to be diverted from their strategy. Instead Beane sells a couple of the players the coach is picking to force his hand. I don't quite understand why he didn't just fire his coach but selling the players has the correct effect and the team embark on an all-time major league record of 20 consecutive wins. 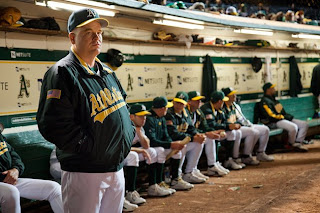 They top their division and again reach the playoffs, only to lose at the same stage again. The point though has been made and Beane is headhunted by another team, although ultimately he decides to stay in Oakland.

It’s an interesting film and a true story. I love all the statistical stuff, but it does uses jargon that only baseball fans would comprehend, so an understanding of the game would be useful. I feel a lot of the actual results were glossed over but as this is all factual, if you’re in America you probably know the details of what happened.

Pitt is good and I'm a bit of a Pitt convert over the last few years. Although I can't see anything in this that warranted his Oscar nomination but he is as good in this as has been in most of his recent work. Recommended.