I’m on the bike again today, as it results in less coughing than running.

L regales me of a tale of a poor young girl she passed this morning who was being made to run up the evil steps near L’s work, do six star jumps, then run down the steps and lift weights at the bottom. Whilst her personal trainer stood nearby drinking a Costa Coffee. This reminds me, I really must get on with becoming a personal trainer. It sounds such fun, especially if young girls are prepared to pay handsomely to be tortured. It must pay handsomely, if he can afford Costa.

L isn’t initially keen on tonight’s gig, which she’s going to with her brother. Unfortunately I’m washing my hair, so I can’t take her place. Rammstein don't even sing in English but apparently they do go all out with their stage show.

L, as it happens, has a whale of a time despite the singed eyebrows. There are a lot of pyrotechnics including guitars, keyboards, microphones and possibly Zimmer frames on fire. The keyboard player used a Zimmer frame mounted keyboard at one point, that was when he wasn't on his treadmill or in a saucepan. This review is secondhand by the way, but I think it's generally accurate.

I may have quite liked the crowd surfing in a rubber dingy bit, that sounded quite cool but I’m not quite so sure about some of the other stunts. Such as the lead singer putting on a dress and walking his band mates around on lead nor the gay sex scene but I guess it would all have made a good blog. 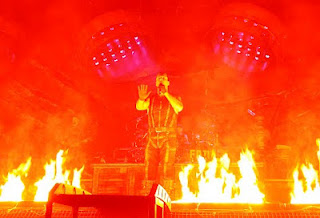 I stay in, dog sit and have my own pyrotechnics as L insists I build a funeral pyre for some rather threadbare handkerchiefs that have been called up as reinforcements following my recent bout of whatever it was. It’s sad, some do have sentimental value, but I do concede that a few perhaps need retiring. I organise a short ceremony.