The official taps her pen against her teeth, then against the table, then against her keyboard. She stares at her computer screen, then at my passport, then at my visa before scratching her chin and then looking me over for the tenth time. I’m pretty sure my features haven’t changed since the last time she looked. It’s all a farce anyway; I’m sure modern technology put all my details up on her computer screen ten minutes ago.

Finally she stamps my passport and hands it back to me. ‘Welcome to Russia’ she’s says without a hint of meaning it. We’re finally here. Hot. Cool. Yours. As they say in Sochi.

Inside the arrivals hall they’re quite a bit more friendly and talkative. A young female ‘games maker’ validates my spectator pass and a young male one organises a taxi for us. 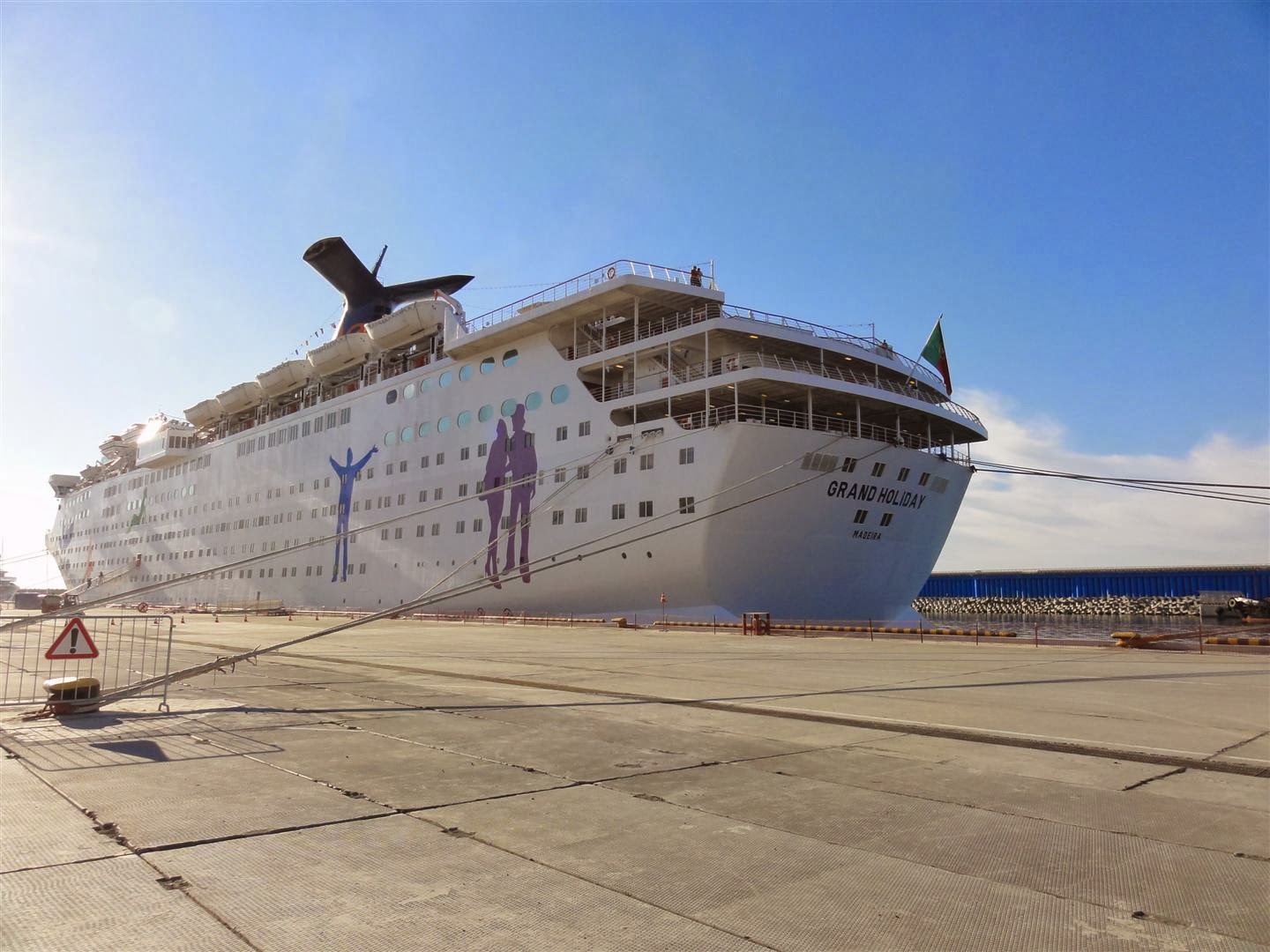 The Grand Holiday is a twelve story cruise ship from Portugal and it is taller than most buildings I’ve been in. It is one of six ships moored in the two ports at Adler and Sochi which are housing an estimated 12,000 visitors over the two weeks of the Winter Olympics.

The rooms are your typical Travel Inn fodder, which is disappointing considering the scale of the boat (and the price) but fine. Everything else is designed to extract more money from you, so much so that they give you a plastic card which is required for any purchases and which has to linked to a credit card. Very sneaky.

Wi-Fi isn’t free, nor is water. The info in the room advises us to purchase bottled water from them as drinking the tap water isn’t advised. It also clearly states that the forbidden tap water comes from a drinking water tank. There’s a contradiction in there somewhere and anyhow, it tastes fine to us.

Everything else on board, the bars and the restaurants etc, are fairly posh. Breakfast is quite a feast, although sadly only available until 10am which with a lot of people not getting back from venues until gone midnight is a bit over strict and causes a last minute rush every morning. We get in the habit of putting ‘do not disturb’ on the door and returning to bed afterwards.

The Olympic Park is a mere stone’s throw away, not that security would let you throw one, but the entrance itself is a couple of miles around the security fence. This takes us around an hour to walk, so had we had more than one day in the Olympic Park we would have done a one stop journey on the train instead. 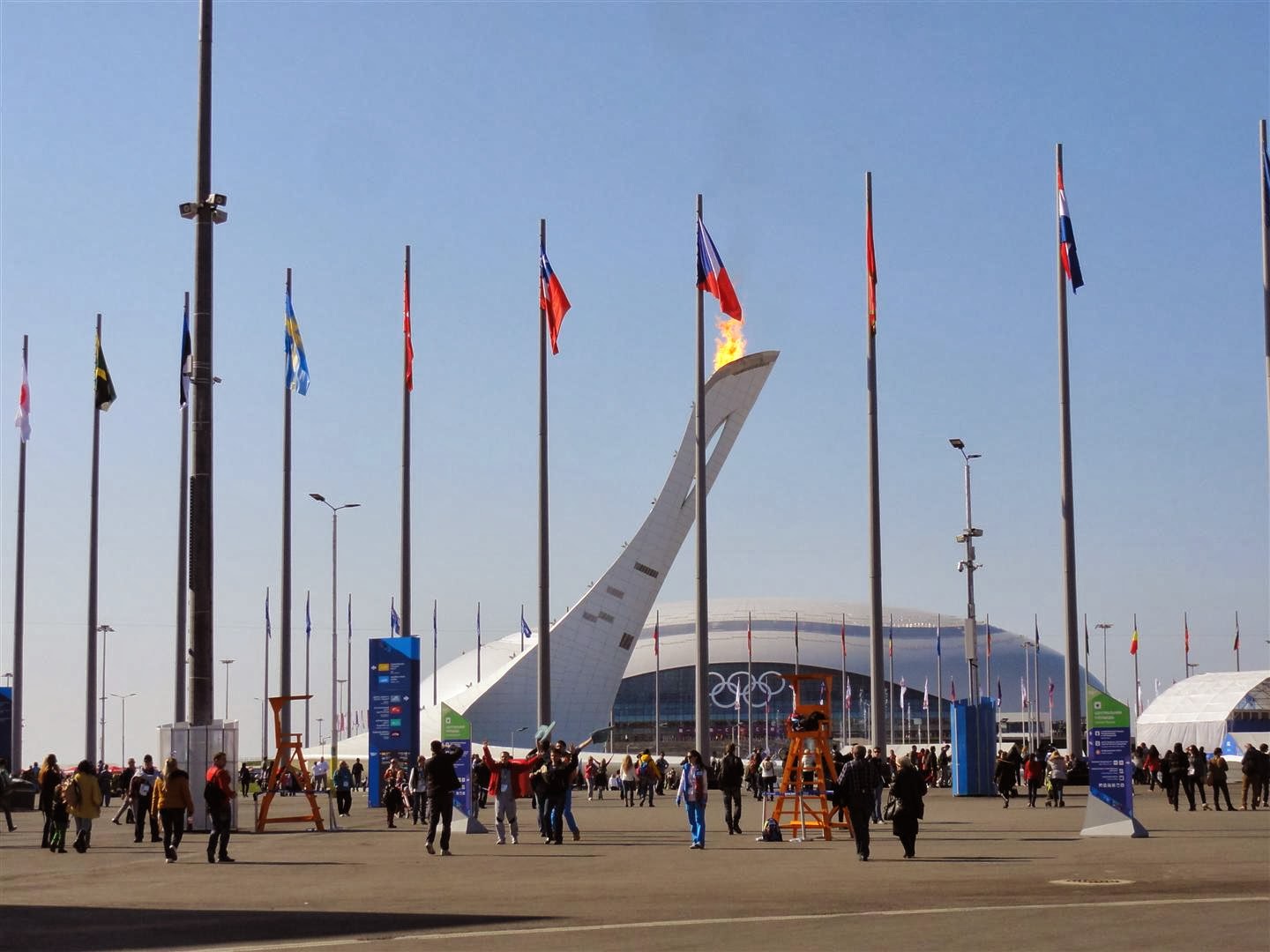 The train service is very efficient and we use it liberally with five out of our six days spent up in the mountains at Krasnaya Polyana.

Our first event on Valentine’s Day is up at the Sanki Sliding Centre, where we watch first the Men’s Skeleton from the start area and then the Women’s from further down the course. We were therefore there to witness first hand Lizzy Yarnold bring home the bacon and the gold medal. 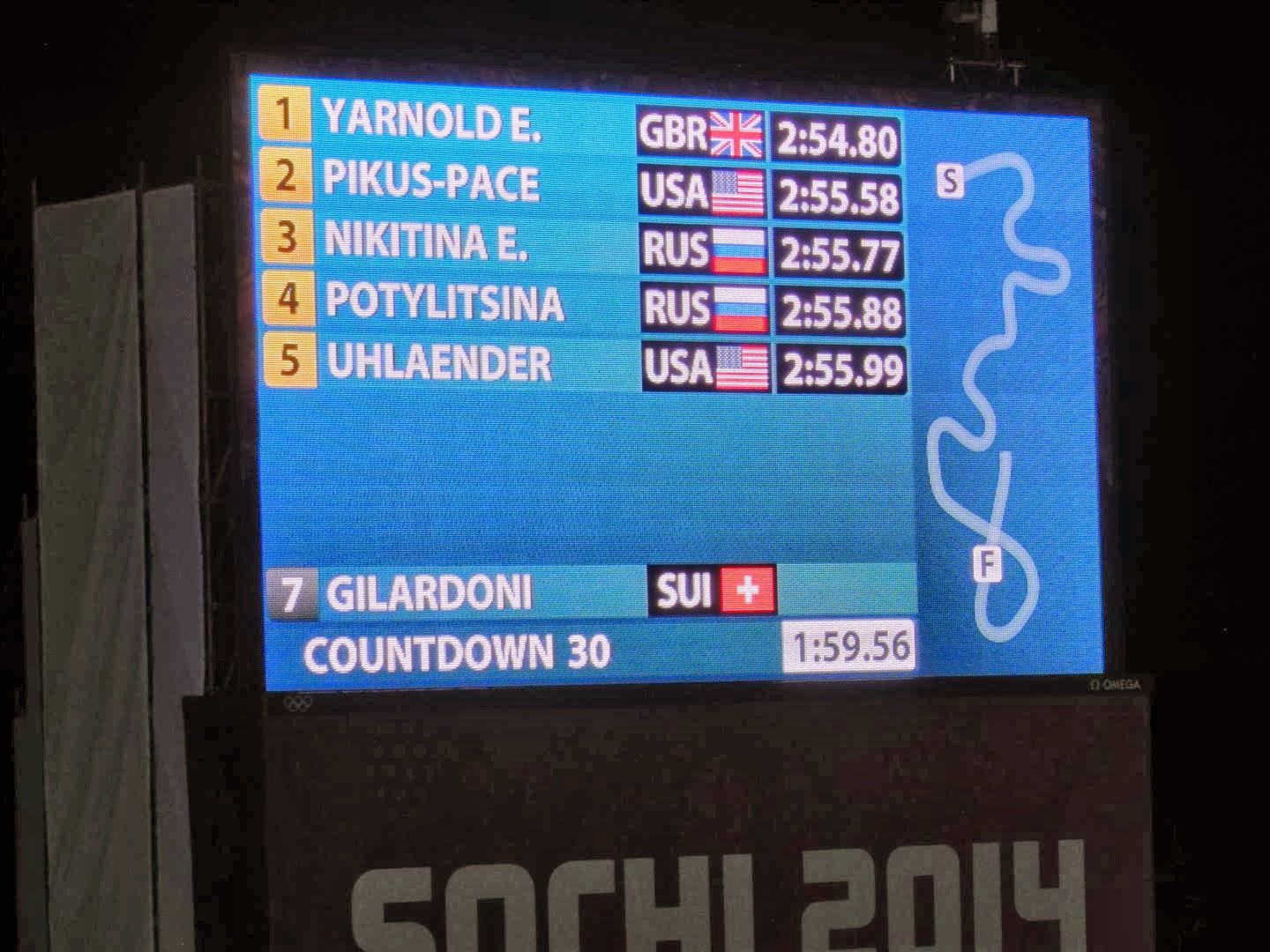 Sadly we couldn’t get into the finish area to see her flower ceremony and although we were in the Olympic Park itself the next day we didn’t see the medal ceremony as we were in the Ice Cube watching the Curling. Where we see the British women lose on the last stone to Switzerland. The girls got revenge in the end beating the Swiss in the Bronze Medal Match. 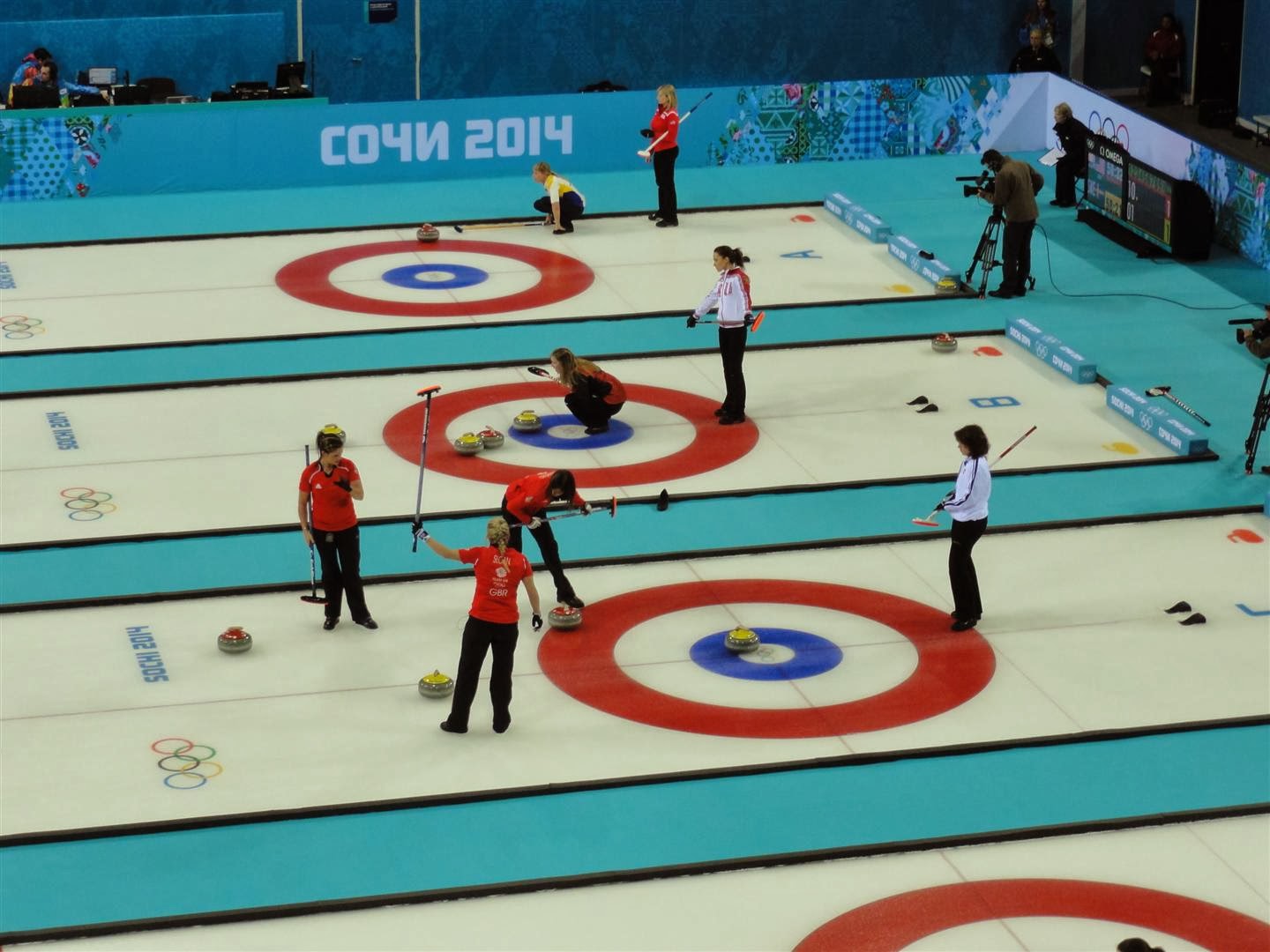 The doubters were wrong. A sea side location is a great place to put an Olympic Park. It is the perfect setting with the snow clad mountains as a backdrop and we are loving it inside the Olympic bubble. 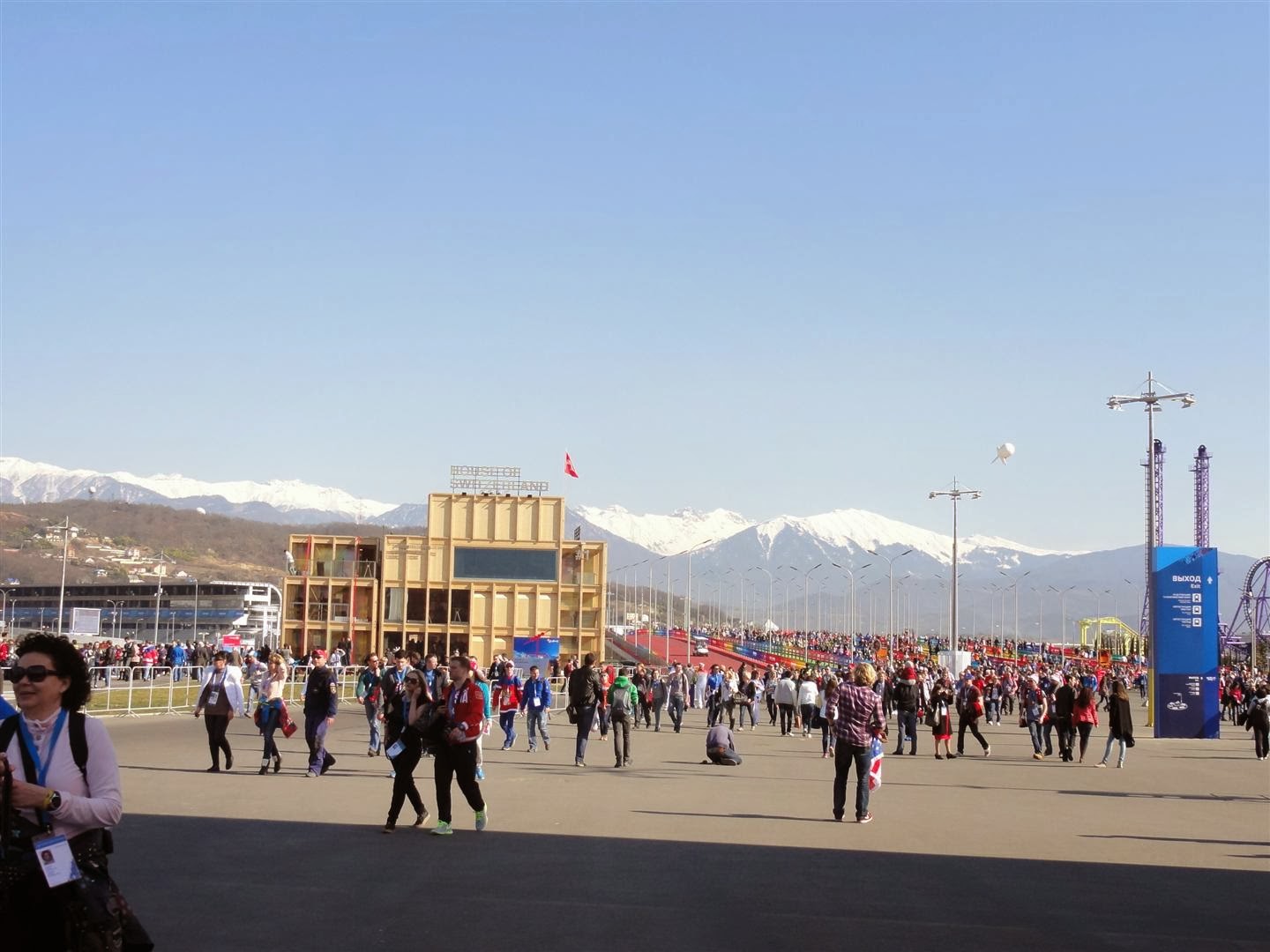 Everything goes very smoothly, is organised like clockwork and everything that matters is ready.

We were back at Sanki on Sunday and Monday seeing all four runs of the Two Man Bobsleigh. As well as getting our faces painted. Kudos to that particular games maker, as it’s not the easiest of flags to paint. 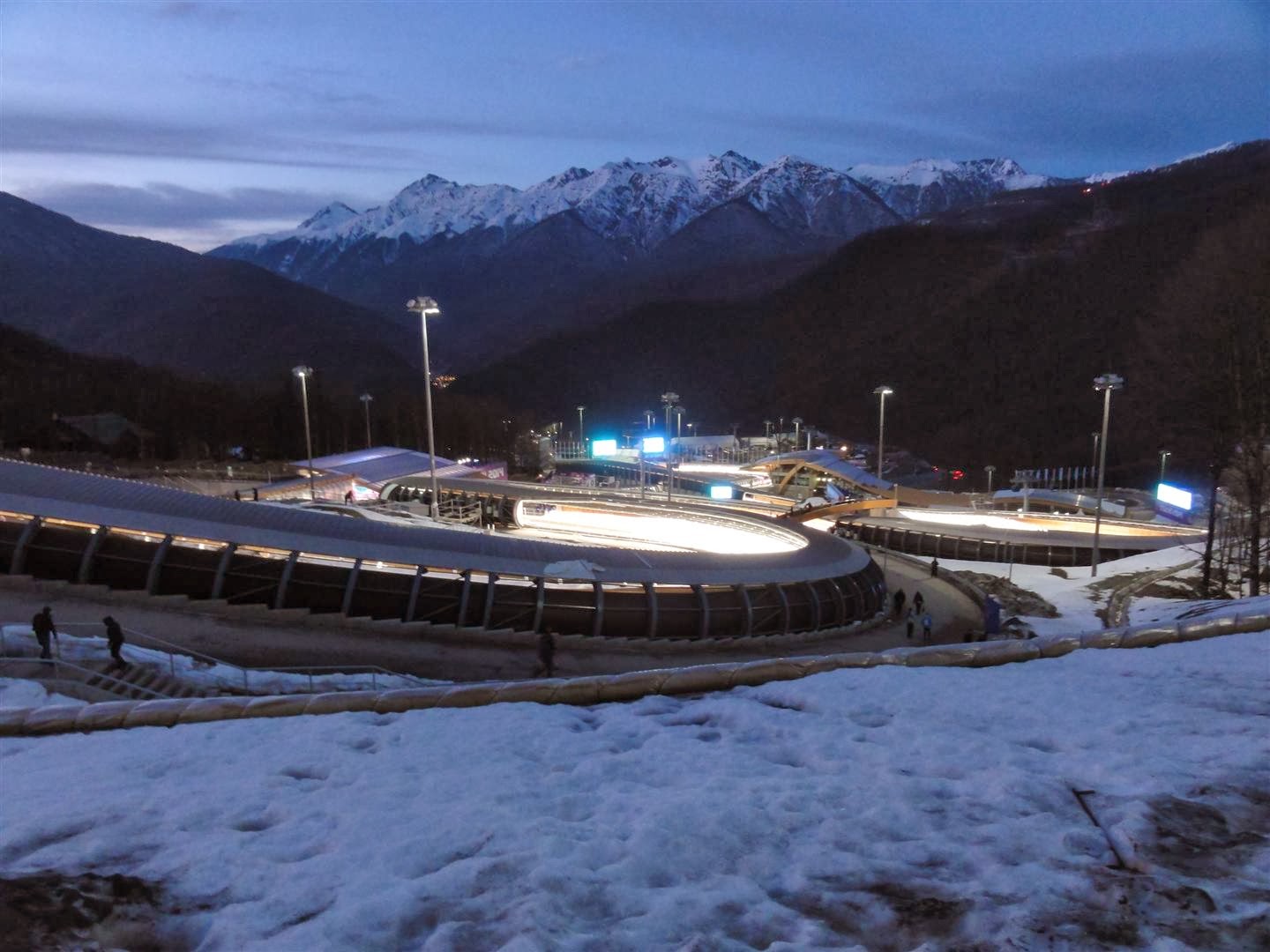 The games makers are everywhere. All young, dynamic, helpful and exceedingly attractive. Well the female ones are. I can’t really vouch for the male ones, that’s not my department, but I assume the same applies. There must have been a very rigorous selection process.

They’re also all so incredibly eager to please. Hot. Cool. Yours. I guess, although I’m not sure how you’d get one past security at the boat.

The natives are friendly too. All the Russians, who have turned up in big numbers, seem extremely pleased to be there and to see us there too. They even loved the Americans. Several people wanted to have their  photos taken with of us with our flag. Our too big flag according to L. Clearly size isn’t everything.

On Tuesday it was a case of Hot. Cool. Yours. And Wet. Very Wet. As we spent the day amidst the rain at the Russki Gorki Jumping Centre for the Nordic Combined. I was very impressed with the ski jumping both the sheer size of it and the distance the guys jumped but less so with the Japanese chap’s broken arm.

Tuesday was the only night we made it back to the boat in time to eat in the restaurant, which was a bit of a blow out on the cost front and on the size of the cheeseboard but it was our only proper meal of the whole week. 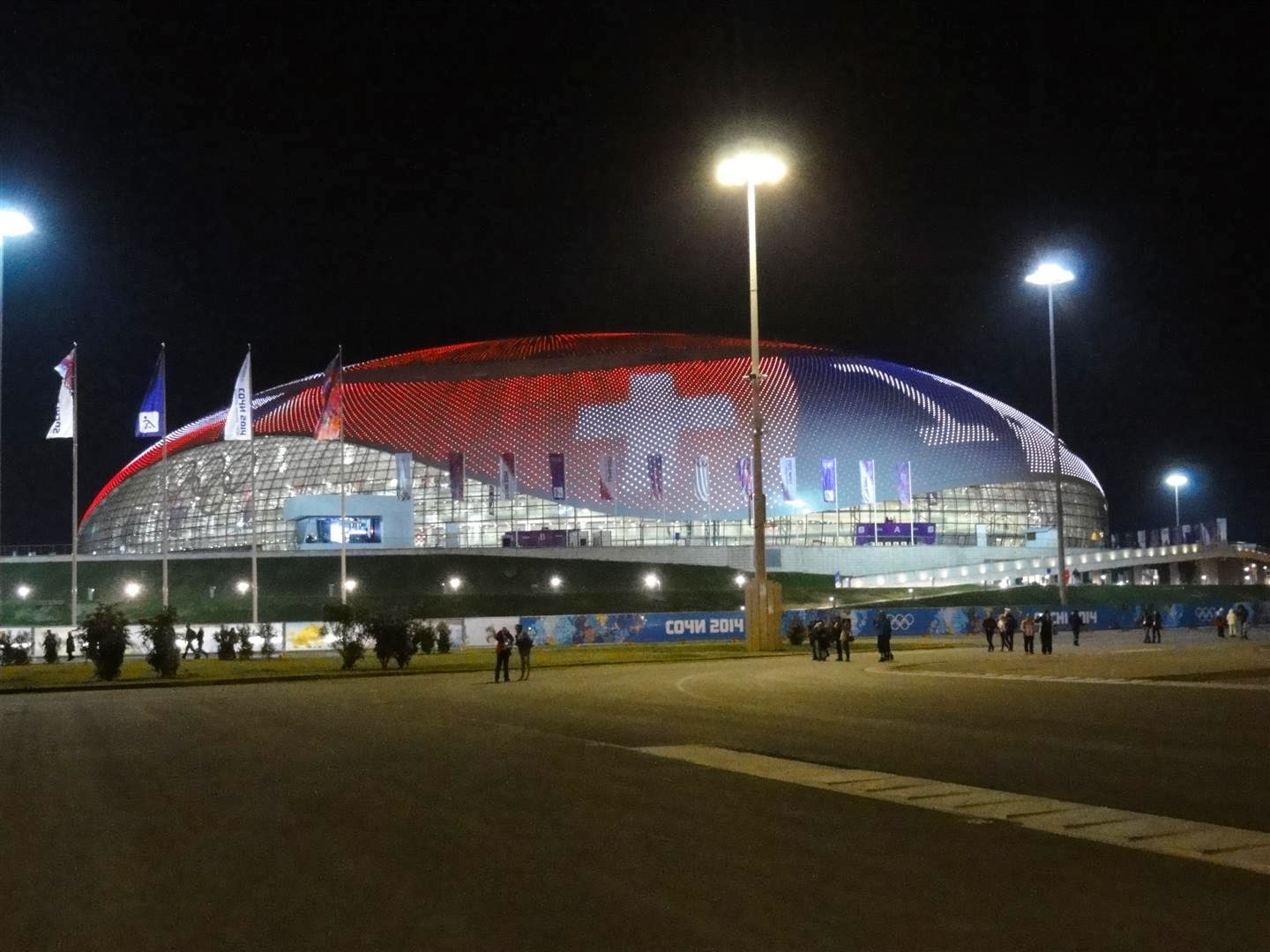 Generally after a huge breakfast we survived on kebabs and the other stuff they sold at the venues which was washed down with a Baltika 8, a 5% Russian wheat beer. On the ship in the piano bar, which would have been better without the piano (but I guess it was atmospheric) and the fellow Brits (who weren’t atmospheric just Scottish), we drank Baltika 7, a 5.4% export lager.

We had the cheap seats for all the events we went to and generally we had a brilliant view. The one exception was perhaps on our last day at Laura watching the Biathlon, where although we get a great view of the cross country skiing we couldn’t see the shooting and there were no big screens. 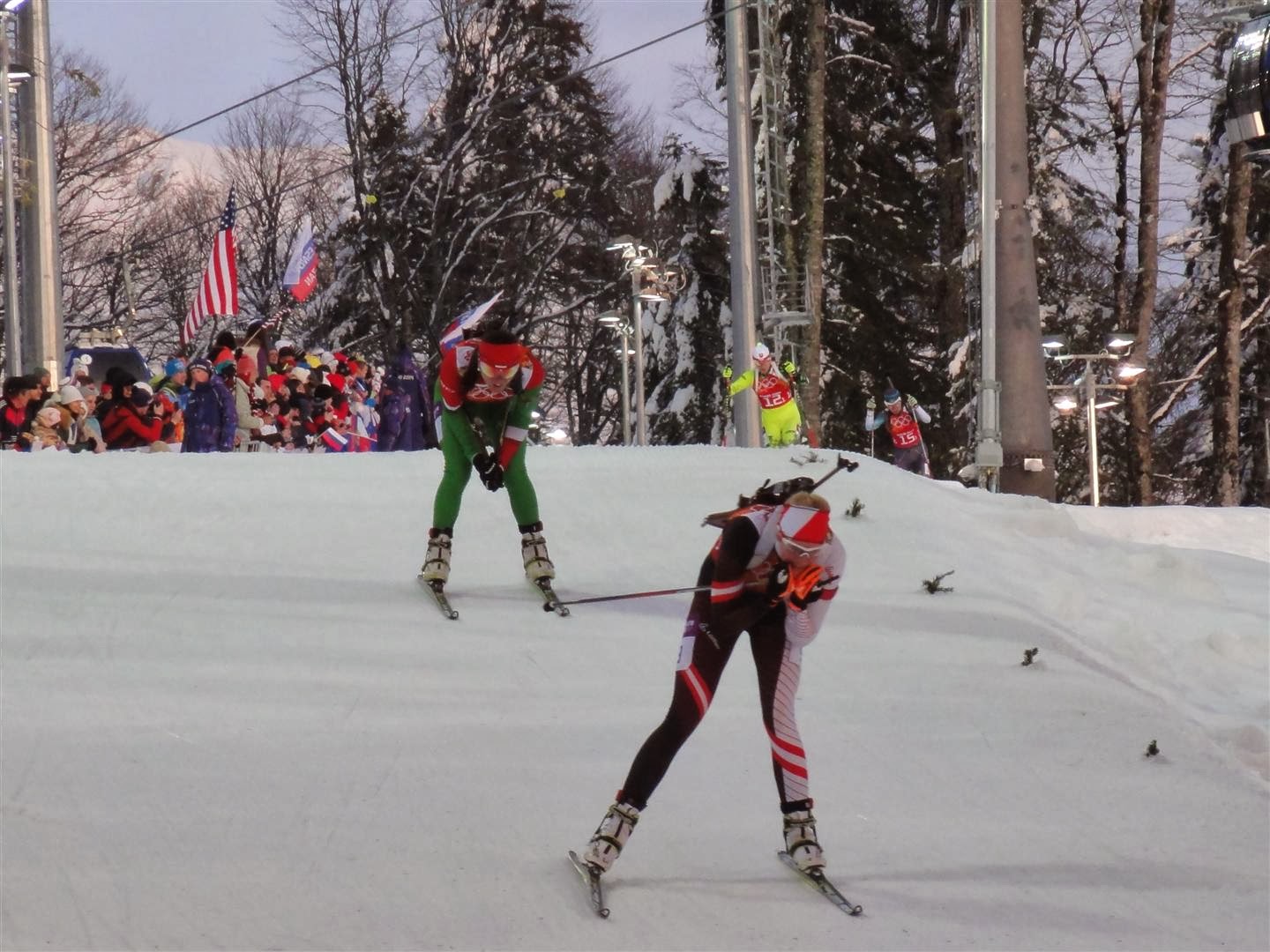 All too soon it’s over and we’re on our way back home, flying into Frankfurt with the Jamaican Bobsleigh Team and some chap from the Canadian Freestyle Team. He gets asked about his sport at passport control, I don’t. Clearly I don’t look athletic enough. 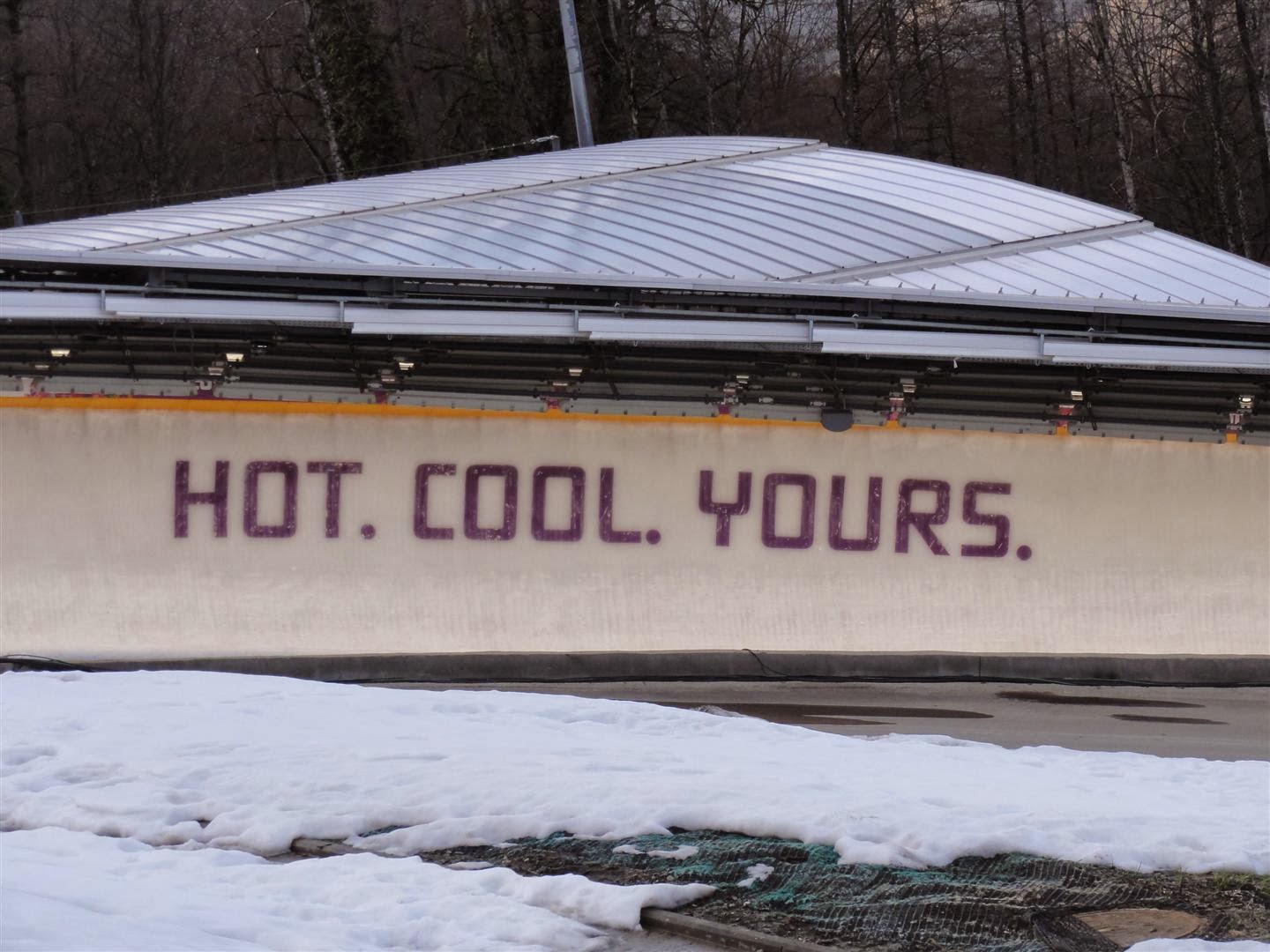 Sochi was a phenomenal experience and well worth the trip.

Posted by FitForNothing at Thursday, February 20, 2014