Today is Daughter’s second Graduation in two years. Yes, you wait 21 years for one and then two come along almost at once. We take the day off and make an early start to get over to the Manchester for the ceremony which starts at 10am.

Things go well, the ceremony is short and sweet. Daughter even puts up with the endless photographs. We take her for lunch before heading back home again.

I have a gig tonight, that I am missing Derby’s 4-0 demolition of Charlton for.


Support comes from 'Stealing Sheep' who I was looking forward to seeing and the three Liverpudlian girls took to the stage dressed as... well I’m not actually sure what they were dressed as, with their technicolour bodysuits, capes and sunglasses. It does though match up with the cover of their latest album 'Get Real', not that that really solves the puzzle.

Psychedelic in look and also psychedelic in sound, at least initially because beyond that they are largely keyboard orientated pop. Perhaps what the Breeders would have sounded like if you'd taken away their guitars. 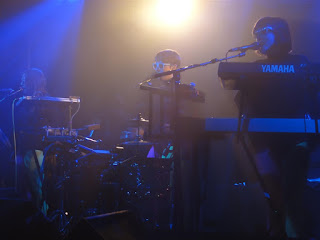 After a few songs they take their shades off and get serious but sadly the girls are mainly lost in the darkness/smoke and the vocals are way too quiet meaning they fail to catch the attention of most of the audience. This is a shame because the three of them trading off vocals seems to be their thing.

Then two songs from the end someone seems to notice there is a problem. The lighting is turned up slightly, so that you could at least see their heads poking over their electronic gadgetry, and at the same time the vocals were turned up so that you could hear them. That made a massive difference and the crowd started to notice them. Shame that didn't happen at the start because five minutes later its shades back on and exit stage left. Dressed as whatever they are.

I'm not at all keen on these 'play an entire album in its entirety shows' but I'm actually quite looking forward to this one. I have also been driven to this one because Maxïmo Park have steadfastly refused to play one of my favourite tracks of theirs 'Once, a Glimpse' from their début album 'A Certain Trigger'. It is the only track on said album that I have never seen them play live, so tonight I will finally get to hear it. At least I would hope so as this is the 10th Anniversary show of that album.

They have also promised some rarities tonight which I had took to mean that they might also play the ‘Missing Songs’ B-sides album from the same era. That they don’t do, at least not in its entirety, but they do play ‘A19’ and ‘A Year of Doubt’ from it and both sound great ten years on. This pair of forgotten gems come in a first set of 11 songs which lead singer Paul Smith describes as a career spanning selection from albums two to five. 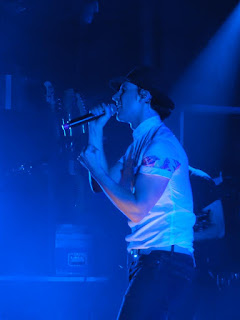 They open the set with ‘Girls Who Play Guitars’ and close it with a double header of ‘Our Velocity’ and ‘Books from Boxes’. All three of those come from their second album ‘Our Earthly Pleasures’, as does the possible stand out track from this first section the splendid ‘Russian Literature’ which sort of highlights their problems of late. In that their last three albums can’t really hold a candle to the first two. That said ‘Midnight on the Hill’ from last year’s ‘Too Much Information’ is another stand out moment tonight.

After this first set they wander off stage for all of about two minutes before returning. This is just enough time for Smith to change his shirt and put a tie on for the occasion.

I wasn’t sure just how highly rated ‘A Certain Trigger’ was by their fan base but now I am sure. Very highly. Its opening track ‘Signal and Sign’ is greeted like a long lost friend. 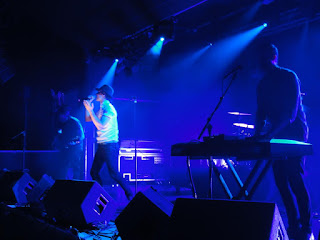 Suddenly the crowd are even more up for the night than they were before but then so too are the band as they throw themselves into this near classic album.

‘Apply Some Pressure’ is followed by the excellent ‘Graffiti’, then an epic ‘Postcard of a Painting’. It’s excellent stuff and that’s before we get to ‘Going Missing’, probably their finest moment.

Eventually, thankfully, ‘Once, a Glimpse’ arrives and it does indeed sound fine. Worth the ten year wait? Not sure about that but hopefully I won’t have to wait another ten years before they play it again.

I’m still recovering from that experience when the always brilliant ‘Acrobat’ arrives. 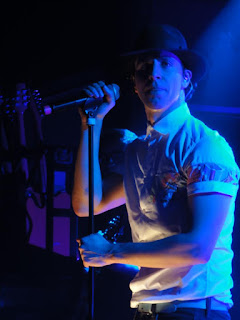 Before the final track of the album, Smith announces that the band will not be doing an encore. This is, of course, quite a ‘rock n roll’ thing to do (or not do) but I’m not sure this applies if you apologise in advance.

He gives the excuse that they'd already been off once, I’m not really sure why they did that, and they'd already played all the ‘big ones’. Which would have made their choices for the encore somewhat interesting would it not? Or they could just have delayed one of those ‘big ones’ from earlier. I suppose in mitigation they had already played 24 tracks but there was still 30 minutes to go to curfew. Lightweights.

Despite that slight let down at the end, it’s still a rather excellent evening. As I said I hate entire album shows... but that was rather good.