Back on the bike today for a blustery ride in and a wind propelled ride home.

Audible give us a £10 voucher probably because we must be one of their best customers. If not, L is working on it.

Tonight we are out on the razz with Duran Duran, Seal (ugh) and the Bloom Twins. The Bloom Twins are Ukrainian twins which we would have to go very early to catch. They are probably more my thing than L’s, but then probably not musically, though they don’t look old enough to be out on their own. 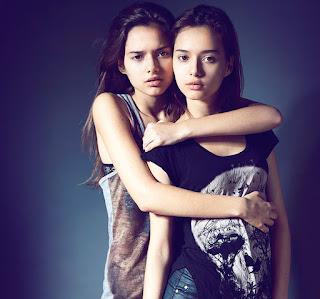 We decide to turn up later and have more pre-gig dog time. So apologies to the twins but we did catch the end of Seal. I’m not a fan but I will say he was professional, amenable, popular and has a good voice. I just find him rather dull. Sorry mate. I was though impressed with the arena sound which was far better than the last time I was here, which bodes well for what is to come. 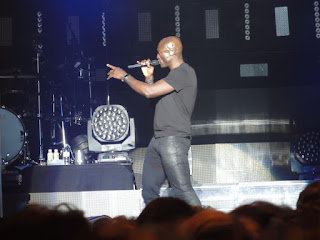 Duran Duran on the other hand are anything but dull. They open their set with ‘Paper Gods’, the title track from their latest album, and it’s an impressive opener played for effect with good visuals on the screen behind them. This is already far more glitzy than my usual gig nights.

After which they launch into a trio of crowd pleasers with ‘Wild Boys’, ‘Hungry Like The Wolf’ and ‘A View To A Kill’ back to back. With the excellent ‘Come Undone’ following close behind you can’t help thinking that the band have perhaps shot their load (can I say that?) a bit too soon. 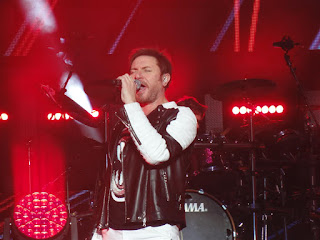 From this point onwards the band regularly dip into their 14th and newest album, which again visits the electro-dance sound that they started experimenting with as long ago as 1988 on ‘Big Thing’. I’m not sure a lot of the audience were ready for that.

Some of the new album is very good although they perhaps didn’t play some of the most accessible stuff on it. Alongside the new material they play the likes of minor hit ‘I Don't Want Your Love’ from the aforementioned ‘Big Thing’, and a slightly obscure album track in ‘Love Voodoo’ from 1993’s ‘Wedding Album’ the album that rescued them from near obscurity and which contributes four tracks tonight, which is more than any other bar the new one. 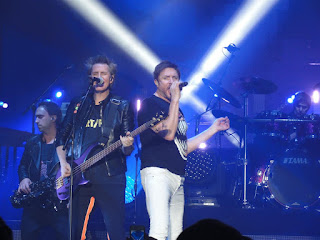 Then there’s their bizarre version of Grandmaster Flash and Melle Mel’s ‘White Lines (Don’t Do It)’ which they covered way back in 1995 to much derision and yet it still seems an integral part of their set ahead of their own material.

Clearly this is a band doing it for themselves as much as for the fans, a band who are not content to simply work the nostalgia circuit. They have some balls too, as it’s interesting to note they do not play either of their two UK number ones tonight. Oooo controversial. 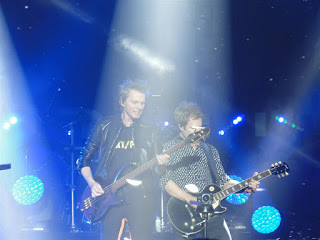 They look good on it and at 57, Simon Le Bon’s voice is as good as ever, if not better. While Le Bon and bass player John Taylor bounce around the stage, Roger Taylor and Nick Rhodes hide behind their drums and keyboards respectively. Rhodes it has to be said plays the enigmatic keyboard wizard so well that all he needs is the toothbrush moustache (in white preferably) to complete the transformation into Ron Mael from Sparks.

When ‘Planet Earth’ arrives the crowd are back on more solid ground, this is followed by the brilliant ‘Ordinary World’ and their 2004 hit ‘(Reach Up for the) Sunrise’ which pays homage to ‘New Moon on Monday’ mid-song for no apparent reason. 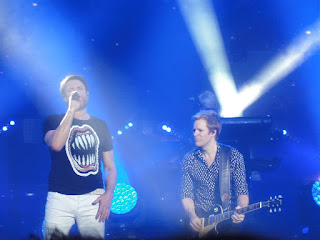 As paper cannons shower the arena with confetti presumably delivered from the Paper Gods, the finale approaches where they blend three songs together. Starting with the all new ‘Danceophobia’, into the mid-career ‘Too Much Information’ before finally arriving at the oldie ‘Girls on Film’ before they leave the stage to rapturous applause.

Returning for an encore, Le Bon turns uncharacteristically serious for a moment. Explaining that the band had performed ‘Save A Prayer’ with the Eagles of Death Metal not long before the Bataclan shootings in Paris. The Eagles of Death Metal’s version is now re-released and all proceeds will go to good causes.

He then asks for everyone to turn the lights on on their mobile phones and wave them in the air. This is despite me screaming and pleading at him ‘no’, I hate that sort of thing! They then of course played the song itself before closing an entertaining evening on a more upbeat note with ‘Rio’.