L again opts to stay in bed rather than parkrun. An excellent decision in my unbiased opinion. All the exercise she needs is to hand. Then she's off to Pilates.

I have a nagging feeling that I should be doing something relating to ‘Panic Saturday’ but I can’t quite put my finger on it.

We have managed to resist the lure and the thumbscrews of our friends trying to talk us into Lawnmower Deth’s Christmas Party this evening.  Instead we are at Broadway where the Centurion is on.

I had my doubts about Stephen Frears' film about Lance Armstrong but thought it was worth a look anyway. Personally I think it was way too soon to make this film as no one is in charge of all the facts yet but I suppose cashing in on the Armstrong saga made it necessary to be made now. They’ll probably be plenty more to come. 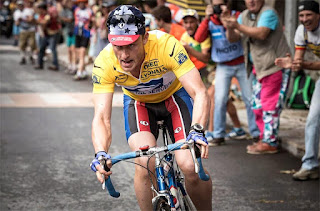 You probably know the story by now but if you don’t then this will be a real eye-opener. Basically, the massively competitive Armstrong (Ben Foster) doesn’t like losing at anything and is so determined to be the best that he enlists known dodgy doctor Michele Ferrari (Guillaume Canet) to chemically assist him. Before long Armstrong is destroying everything in his path - rival cyclists, testicular cancer and anyone or anything else that gets in his way. With his seven Tour de France victories and his cancer charity he is an inspiration to millions but Sunday Times journalist David Walsh (Chris O'Dowd) was unconvinced from day one but Walsh stands almost alone in his pursuit of the truth. 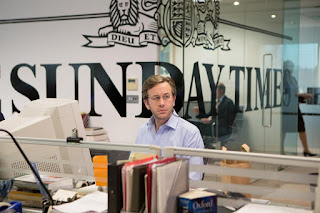 The story is pretty much taken word for word from Walsh's excellent book ‘Seven Deadly Sins’ and the film is very true to the book. It doesn't however make for a very coherent story as Frears tries to cram thirteen years of events into the film by presenting a checklist of Armstrong's life. He also decides to use the first half hour of the film to big up Armstrong before shooting him down as if to give a balanced view of the man. I don’t think that was at all necessary. 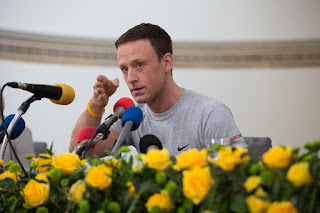 The film fails to do much more than skim over the surface and never really goes after Armstrong with any real gusto probably because it daren't speculate on what we don't yet know. There are now numerous documentaries that go much deeper than this film does and I'm sure even they haven't got to anywhere near the bottom of this murky saga.

Unfortunately Ben Foster isn't terribly believable as Armstrong, he’s not nearly as intimidating enough for a start, but then I'm not sure who could have pulled that off. 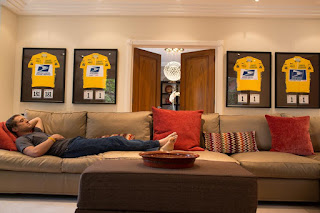 Despite its shortcomings, The Program is largely entertaining and informative but not particularly outstanding.


Afterwards we try to get in the Crafty Crow but it's too packed. So we end up in the Blue Monkey for a Gorilla. Then the Borlase for a couple of Lincoln Green beers - Josef Keller Cherry Stout, Josef Keller being the chap who invented Black Forest Gateaux, and a festive Holly Green.