A Room With A Brew


The weather sounds foul so we stay in bed rather than parkrun this morning. So L's 50th t-shirt doesn't get a run out. Then L heads off to pilates while I settle in for the match which is a not so thrilling 1-1 draw between Derby and Fulham.

It’s a bit of a rarity to eat at home tonight before we head off to Broadway to see this week’s film. We are actually trying out hardest to eat our way through the freezer, so that we can defrost it. Hopefully we can now do this tomorrow.

2001 was about the time that internet news was just starting to replace newspapers for most people and The Boston Globe is subsequently suffering from falling readership. In comes new managing editor Marty Baron (Liev Schreiber) who tasks the Globe’s ‘Spotlight’ investigative team at the Boston Globe with taking a fresh look at the abuse cases with the local Catholic Church. It was a good thing he did. 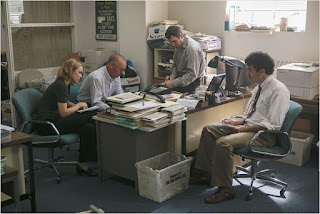 Boston though is a small town full of insular Catholics who would rather bury their head in the sand. They don't want to rock the boat or upset the gravy train and many simply point to the church's charity work as a sign the church is only a force for the good. The Globe itself hasn’t even been interested in the past because most of its readers are also Catholics. Baron is neither a local nor a catholic and doesn’t care about any of these things. 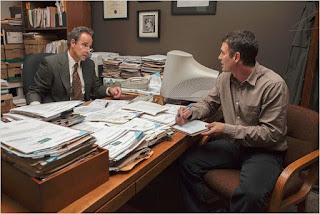 The team belatedly listen to Phil Saviano (Neal Huff) the leader of a victims group and Rezendes persuades Mitchell Garabedian (Stanley Tucci) an Armenian attorney working for some on the victims to let them start interviewing his clients. 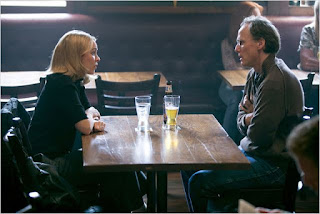 Gradually the team uncover a pattern of child abuse by the church that has been covered up by lawyers who have organised pay offs to the victim's families and by the church itself through reassignment of the abusive priests to new parishes, where they can start over again. Abusing that is.

The team discover that there are more incidences than suspected, far more and that go far beyond Boston. Eventually after having to take a step back when 9/11 hits the story eventually breaks in January 2002. 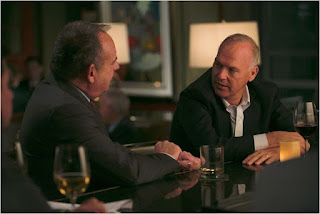 This is a true story, for which the Globe won a Pulitzer Prize in 2003, well told. There is no media agenda portrayed here, no setups, no hidden cameras, no honey traps, just brilliant investigative journalism. How refreshingly old school.

It makes for a riveting watch from beginning to end. There is no forced comedy, no romantic sub-plots and no trumped-up action scenes. What’s more there is no grandstanding for awards, yet if there’s any film out right now that feels like an Oscar winner, this is probably it.


After the film we head to Nottingham’s latest new pub called 'A Room With A Brew', which is owned by Stapleford brewery Scribbler's Ales who name all their beers after literary masterpieces and I'm on the 'Rubecca' tonight. The pub is also quite old school in that it calls last orders at 11pm, at which point we move on to the Borlase. Where we get called last orders on again at 12am before heading home on foot, after inexplicably missing the early running 'two' bus.