A Spanner In The Comfort Zone


We both have a medicals this morning to decide whether we are fit enough to run the Paris Half Marathon next month. How hilarious is that?

Before that L throws a very large spanner in my comfort zone by proposing I join her for an early morning swim. After some soul searching I agree and the pool is far busier than L usually has me believe. I have to share a lane, with L, and I’m sure she was racing me.

We arrive at our GP’s to find two of them lying in wait for us and scratching their collective heads as to what they could actually do to prove our run worthiness. One of them takes my blood pressure, listens to my heart and then has a check to see that it’s not protruding from my rib cage. It’s not and I’m good to go. They stamp my indemnity form, so now if I collapse it’s no longer France’s problem and presumably I’ll be on the first transportation out of there. On the way out they relieve us of £15 each, ouch. Suddenly I feel faint but I daren’t pass out in case they want their form back.

By the way the Paris Half is now sponsored by Fitbit. What’s that all about?

I arrive at work for 10am and still managed to get on to the car park. That’s some achievement.

Tonight I have a gig.


So is this how far Bloc Party have fallen? Headlining the NME Awards Tour on an unsatisfying bill aimed at the very young. This is a tour they previously played back in 2005 on a bill headed by The Killers but tonight Bugzy Malone, Rat Boy and Drenge are a strange trio of support acts who just don't sit right with the headliners. Clearly it’s not just myself who thinks this as it’s a long time since I have seen Rock City so underpopulated and the balcony closed.

As I arrive slightly late I think at first I must have caught the end of Bugzy Malone’s set as Rat Boy’s opener is basically heavy hip-hop and which is overtly reliant on a backing tape. From there they move into more basic novelty indie territory although they still don't lose the irritating backing tape. Nor do they lose the overexcited screams from the many young teens down the front.

My research on them consisted of a single play of ‘Sign On’ on YouTube, track that isn't too bad and is played second last tonight from where it looks down a bit unfavourably on most of the rest of the set. 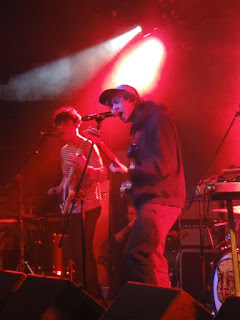 Jordan Cardy’s (aka Rat Boy) lyrics are clever at time and there's clearly something in there fighting to get out but there’s too much going on at times that’s not about the music. They’ll be breaking out the silly string next... oh there you go. Disappointing. Perhaps Drenge will be better.

Drenge are better but no less raucous, as the school age teens are replaced by the university teens. This causes both the standard and the level of moshing to improve exponentially. Equally the Loveless brothers, Eoin on guitar and Rory on drums, talk to their audience on equal terms rather than like it’s an edition of Playaway (sorry, showing my age there). 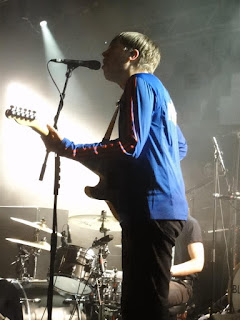 Drenge are possibly the lovechild of Storm Gertrude and Storm Henry, a maelstrom of heavy guitar riffs and pounding drums, that wreaks carnage across the dance floor creating a mosh pit of the like I’ve not seen for a couple of decades. So kudos for that. They leave an impression and it’s a loud, aggressive one but they are also a touch repetitive. This non-stop assault on the ears was soon starting to give me a bit of a headache. I think I’m getting to old for all this.

If tonight’s line-up pointed to the whole evening having a bit of an identity crisis then perhaps Bloc Party were appropriate headliners after all. For some time I’ve thought that Kele Okereke’s band have been torn between two styles, unable to decide whether they are a band of great infectious pop tunes or one of mind bending trip-hop beats. 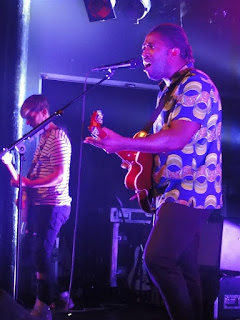 To be honest I didn’t expect to see them back at all. After multiple hiatuses and the departure of half the band many would simple have given up. Yet, nearly four years after their last album, Okereke and guitarist Russell Lissack are back with a new drummer, Louise Bartle, and a new bassist, Justin Harris. They also have a new album, ‘Hymns’, out this week and it’s actually very good. 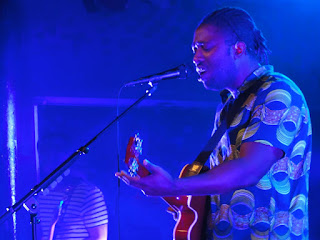 They open with the ‘The Good News’ off the new album, this is one of those infectious tunes I mentioned and then follow it with ‘Only He Can Heal Me’ which is the other side of the Bloc Party coin. The new ‘Mercury’ if you like. This new ‘Mercury’ is followed by the old one from the mostly electronic ‘Intimacy’ album. I find both equally irritating but ‘Mercury’ is a popular number with the crowd tonight, a crowd who beg for ‘Flux’ all evening but don’t get it. Bloc Party are frustrating like that. I don’t get most of what I want either.

At least Rock City has filled up again, I assume the grownups must have been waiting outside until all the kids had finished watching their acts. 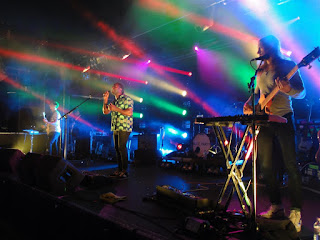 ‘Virtue’ is another great new tune but it is a slightly scruffy ‘Song for Clay’ that pleases everybody as does the arrival of ‘Banquet’ of course.

The set is stolen though by a glorious double header of ‘Hunting for Witches’ and a terrific ‘Positive Tension’.

A mere twelve song set is followed by a four song encore in which Kele doesn’t even need to sing the start of ‘Helicopter’ as the crowd get there before him. While it may have been a slightly unsatisfactory performance overall, it is still very tempting to forgive them everything when something as beautiful as ‘This Modern Love’ appears next. Just before the closing chaos of ‘Ratchet’ plays them out.