L stays in bed rather than parkruns but then runs off to double Pilates. I take the boys for an amble on the park, they seem shocked. No balls are involved. Mid-walk, Daughter rings, she is about to seal the deal on her own flat.

Derby have an early 12.30 kick off and lose again.

We have a late late Full English and then head over to Derby to Quad to catch one of the Oscars contenders that we have missed ahead of tomorrow’s ceremony.

We pop in the Silk Mill for a pint before and the Old Bell afterwards. They now have the old front room of the Old Bell reopened. It’s a nice refit and they have kept the same layout as from when I was 18. I even point out to L where we used to sit! Not that we came very often, it wasn’t actually anything special in the 1980’s.

The Big Short is based on real people and true events surrounding the financial crisis of 2007/8. It is based on the book by financial journalist Michael Lewis.

It is about collateralised debt obligations, sub-prime mortgages, credit default swaps, bundling... Warning some of the financial jargon may go well over your head.

Not to worry, the producers have assumed that the audience will be blissfully ignorant of such matters and have enlisted the likes of Margot Robbie (in the bath) and a celebrity chef to help explain things in some of the frequent off the wall moments in the film. 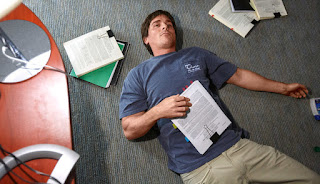 The film itself focuses on four fringe Wall Street players starting with the eccentric financial analyst Michael Burry (Christian Bale). Burry saw what nobody else wanted to see, that the housing market was based on an increasing number of dodgy loans to people who should never have been considered in the first place. He saw it as inevitable that the market was going to collapse but of course no one believed him.

Burry had complete autonomy of the investment fund he controlled and so he created a commodity for his clients betting against these mortgages. When he went to the banks to explain what he wanted to do they simply laughed at him and willingly sold him all the ‘insurance’ he wanted. 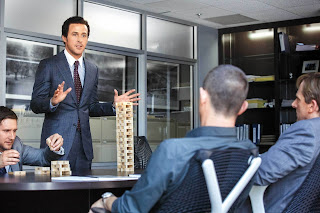 Word of Burry's madness quickly spread and trader Jarred Bennett (Ryan Gosling) gets in on the act. He sells the idea to a group led by a cynical and depressed banker called Mark Baum (Steve Carell). Baum is the boss of a fund under the umbrella of Morgan Stanley, now he is betting against the hand that feeds him. 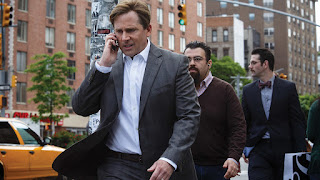 Finally, there's Charlie Geller (John Magaro) and Jamie Shipley (Finn Wittrock), a couple of rookies trying to break into the finance industry. They team up with disaffected former banker Brad Rickert (Brad Pitt) to bet against the investments. 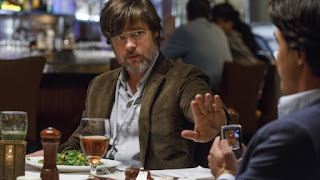 What they all ultimately find is that the investment houses ignore the coming crisis and in fact attempt to hide it because they were all making too much money to want it to stop. The film goes on to suggest that the corruption didn’t stop there and extended to the agencies who oversee the markets and possibly beyond.

The film succeeds in making a story about the financial crisis entertaining and that’s no mean feat. Although it could be viewed as a partner piece to 2011's Margin Call which achieved the same feat and is also well worth seeing.

The Big Short is a smart, clever film with some great acting performances. It could even be the best of this year and is well worthy of its Oscar nominations.