We both parkrun at Long Eaton which I do with MD. We are a little late arriving which I thought would work quite well with MD as it wouldn’t give him time to get wound up but we get to the start line and his pre-race nerves get the better of him and he does a dump on the start line. Then for the first time ever (well, in my limited experience) they start on time at nine o’clock rather than the more usual five past nine. MD is distraught and it takes me a good few minutes to untangle his mouth from his lead. So that’s our PB down the drain. Still a good run though once we finally get started.

L tells me afterwards that they have changed the course slightly, I did notice something didn’t seem quite right.

L then heads off to Pilates and I head to the match where Darren Wassell’s first game in charge ends in a very familiar 1-0 defeat to MK Dons as again Derby dominate in every way apart from the way that matters.

We’re at Broadway in the evening.

Dalton Trumbo (Bryan Cranston) was the highest paid writer in Hollywood in the 1940s and arguably the best. He was also a member of the Communist Party which, while this wasn’t illegal, it wasn’t popular with the paranoid government of the day.

Trumbo, along with many others, was hauled before the delightfully named ‘House Un-American Activities Committee’ to explain themselves and to implicate others. The notorious Hollywood Ten, which included Trumbo, refused to cooperate and stood up against what they saw as unfair treatment of their beliefs. There was never any evidence that any of them were spying for Russia. As a result though, many of them including Trumbo were sent to prison for contempt. 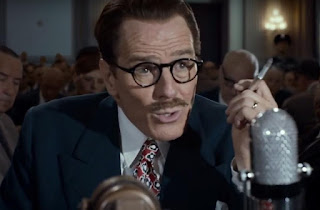 The committee wasn’t satisfied with simply jailing people and they also blacklisted them so that they couldn’t work in the film industry. The committee had significant backing from the likes of John Wayne (David James Elliott) who was president of the equally delightfully named ‘Motion Picture Alliance for the Preservation of American Ideals’ and odious gossip columnist Hedda Hopper (Helen Mirren). 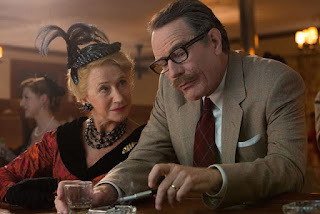 In order to survive some, many such as Trumbo, took their work underground and began writing or directing under false names. It was harder for actors to work anonymously and others, such as Edward G. Robinson (Michael Stuhlbarg), gave in and cooperated with committee.

Trumbo ends up working for Frank King (John Goodman) whose studio produced cheap trashy B movies which involved Trumbo working on the cheap and effectively working around the clock fuelled by alcohol and Benzedrine. This made him very unpopular at home with his wife (Diane Lane) and daughter (Elle Fanning) but who to their credit back him in his fight against the system. His daughter evolves into a younger version of his own stubborn self. 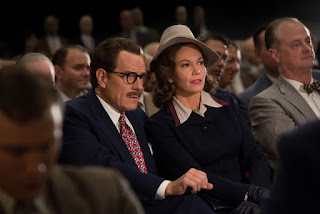 Trumbo also managed to work secretly on several bigger projects causing Ian McLellan Hunter (Alan Tudyk) to pick up the Academy Award for writing ‘Roman Holiday’ when actually it was Trumbo who wrote it. Trumbo goes onto win other awards under various pseudonyms for which he didn’t receive any credit at the time. 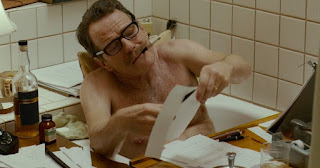 It is an absorbing story and a good history lesson which also includes some real archive footage. Trumbo won several Oscars for his work and it would be quite fitting if this film won something too but I don’t think that is the way the wind is blowing.

Afterwards we again go to the Room with a Brew but then later the Blue Monkey.