L parkruns this morning and then comes over to join us at the dog show in Newark.

She is disappointed with her time and we get the usual ‘shoot me now’ text. It’s that sort of day, MD and I are disappointed with our first run. It wasn’t a bad run on a difficult course but he/we missed a contact. Shoot us now.

Things do pick up for us though and he gets a clear round in the jumping, coming 5th. Five faults on the second agility course still yields 10th place.

Rather worryingly today they have parked us on the muddy field despite the rain but we do manage to slither our way back off it.

We are back in time to eat at home as we’re getting a bit bored with the food at Broadway. Instead the pint of Centurion gets to come into the film with me.

We’re in the American Wild West where a couple of unsavoury villainous types make the mistake of taking a short cut through a burial ground. As a consequence one is brutally killed whilst the other runs for his life all the way to the town of Bright Hope. This is unfortunate for some of the residents there.

Come the morning several people are missing. One of those is the town doctor Samantha O'Dwyer (Lili Simmons) who had been tending to a man who had been shot in the leg as well as to her husband Arthur (Patrick Wilson) who was recuperating from a broken leg.
An arrow embedded in the wall leads everyone to assume they have been kidnapped by the local tribe of cannibalistic troglodytes (aka cavemen).A task force is dispatched on a rescue mission which consists of the sheriff Franklin Hunt (Kurt Russell), his backup deputy Chicory (Richard Jenkins), a chap called John Brooder (Matthew Fox) who seems simply to come along for the chance to shoot somebody and Arthur himself who won’t be left behind. 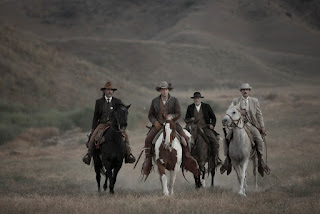 The first half of the film is the story of this motley bunch traversing the wilderness day and night as they travel to their destination. During this time, we get expanded knowledge about the men but sadly none of them seem particularly interesting and although they get attacked quite often not a lot else really happens. 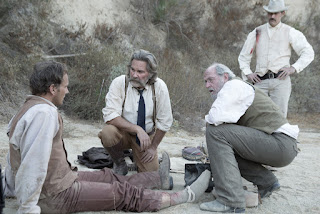 That is until they get where they are headed and they are clearly unprepared for what is waiting there for them.

Arthur has already been left behind after his injury impeded their progress once they lost their horses (a long story). By the time he eventually gets there by following an improbable trail of rocks and crawling most of it, things are already getting a bit difficult for the others. The savages turn out to be, well, savage. Really savage which we get to see in quite impressive detail.

They have at least found those who had been kidnapped, well, the ones who hadn’t been eaten yet and Samantha is fine. They clearly have shampoo in the caves because our damsel in distress still has her lustrous blonde hair despite being locked in a cage for a week.

This film is certainly an acquired taste (if you excuse the pun) but it does showcase one thing that Hollywood is sorely lacking these days and that’s originality but its perhaps best seen from the behind the sofa.


Afterwards it to the Room with a Brew for a Beyond Reasonable Stout before a couple of Buttermuchs in the Borlase.