Naturally when we arrive we have a quickie in Fuller’s Parcel Shelf, or is the Parcel Yard, the one in King’s Cross Station before heading off to check out the Museum of London. The museum itself is a bit disappointing and is probably outdone by the London Wall, which it is near by and which I hadn’t seen before.

After which we check into the Ibis in Shepherds Bush, which is your typically Ibis. Neither nicely posh nor delightfully seedy, just somewhere functionally in between.

The local decent pub is the Defectors Weld which we check out and eat there as well. They do real pies, not casseroles with a lid which are thankfully far less common in London that they are in the Midlands.

Then to the main reason we’re here, so that I can see Shriekback. If I had a Bucket List of things to do before I die, and sadly I don’t but perhaps I should, and if I had one specifically for gigs then seeing Shriekback play Nemesis live would surely be on it.

Sadly the opportunity to see them in the flesh didn’t come up back in the day and the band last played live in 1992. Since then they have only existed as a studio vehicle for main man Barry Andrews.

Now fan pressure (seemingly we still exist) has demanded a live return and Andrews responded by launching a ‘Kickstarter’ campaign, saying that if we fund it they’ll do. I pledged money for a CD and a T-Shirt, the target was reached and Andrews, true to his word, set about reforming as much of the original band as possible. Now here we are with a gig at the Shepherds Bush Empire.

Shriekback were formed in 1981 but were always way too odd for the mainstream, yet they had a string of ‘hits’ on the UK Indie Chart in the days when that was printed in the back of NME, Melody Maker, Sounds et all and was studied avidly by impressionable teenagers like me.

After hearing only one track, their single ‘All Lined Up’, I bought their early ‘hits’ album (released after only one album and an EP) called ‘The Infinite’ for 50p in the ‘dodgy’ bin at Way Ahead records. The records in this bin were usually marked ‘promotional copy only – not for resale’.

This was 1984 and the same year I bought their next album ‘Jam Science’, followed the purchase of ‘Oil and Gold’ a year later, the album that most will remember them for.

Sadly, it’s not looking very busy in the impressive Empire as the support band, the Woodentops, who hail from the same era but with a very different sound, take the stage. It seems the road to reunion hasn’t been smooth, other gigs in Manchester and Glasgow were quickly pulled and only one of two warm up shows went ahead. One in Lewes sold out yet one in Whitstable was cancelled after the promoters only sold six tickets. Ouch. 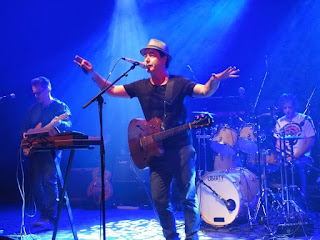 However by the time Shriekback take the stage, after a short but entertaining set from the Woodentops, the venue is actually looking almost full. As is the stage, with their eight piece ensemble. Barry Andrews is joined by Martyn Barker, Carl Marsh, Steve Halliwell and Mike Cozzi with the Partridge sisters, Wendy and Sarah, on backing vocals. Missing, original member Dave Allen is replaced on bass by Scott Firth (of PIL). 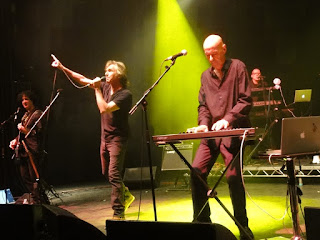 They open with a couple of tracks from 1983’s ‘Care’ album, ‘In: Amongst’ and the wonderful ‘Lines From the Library’ before playing ‘Over the Wire’ a track I wasn’t aware of from an album ‘Go Bang’ from 1988 that I hadn’t heard.

The set also included more recent material with two tracks from the 2015 album ‘Without Real String or Fish’ and one totally new song called ‘Shovelheads’. 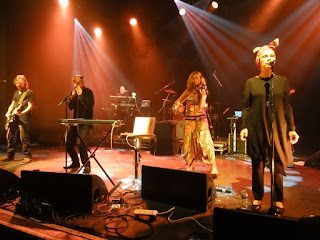 However most of the set is turned over to the ‘Oil and Gold’ album. First its ‘Malaria’ and then ‘This Big Hush’ which was made slightly famous by being featured in the film ‘Manhunter’. Then follows ‘Faded Flowers’, ‘Everything That Rises Must Converge’ and ‘Fish Below the Ice’. All are gratefully and enthusiastically received. While 1986's ‘Big Night Music’ album contributes ‘Black Light Trap’ and ‘Underwaterboys’. 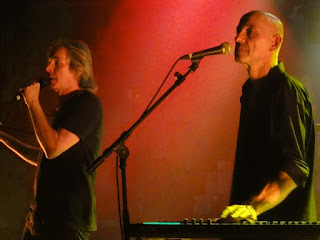 As a finale we get early single ‘My Spine Is the Bassline’ followed by the epic that is ‘Nemesis’ complete with it’s priests, cannibals, prehistoric animals etc.

The snarling almost punk rock of ‘Suck’ opens the encore, which is sadly the only track lifted from ‘Jam Science’ tonight. Then it’s that first track I ever heard, ‘All Lined Up’, and a seventh track ‘Hammerheads’ from ‘Oil and Gold’ to close. 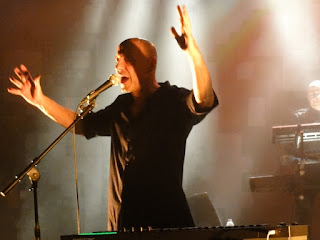 It is very good to finally see them live and they ticked all the boxes I expected them to tick. Perhaps a little too much ‘Oil and Gold’ and not enough ‘Jam Science’ but that’s just my preference.


I meet L back in the bar at the hotel where the TV is breaking the news of the London Bridge attack as we head off for a few beers in the local BrewDog.