On Friday morning, we start off our weekend away by dropping L’s parents off at salubrious location of Trowell services on the M1 from where they will start their own holiday. Well, once they’ve got down to Southampton from where they head off on a cruise and first stop Palma. 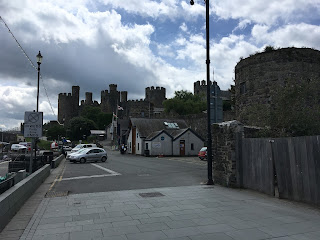 Then we drive to Wales. We are staying in Conwy, near their amazing castle and camping at Conwy Holiday Park. Then it’s off for a pint and we walk into Conwy via some vague path the camp site staff point us towards. It’s quite a trek and hilly, so we worry about Doggo but he copes admirably. We eat and drink at the Castle Hotel which is apparently the only place you can drink Dawson’s Dark from the Conwy Brewery. It’s not exactly dark but its very nice.

On Saturday, its L moment as she tackles Conwy Parkrun which is on a very interesting course in the shadow of the castle which all weekend is hosting something medieval called The Tournament which we really should have found more time to look at. 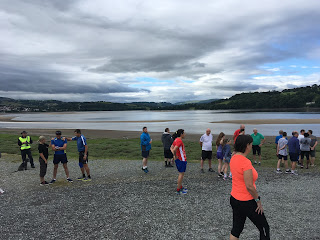 In the afternoon we head over to Llandudno, which is just five miles away, so that I can register for tomorrow’s triathlon. Then we go to a pub called the Albert for a spot of pre-race Dutch courage.

The Llandudno Sea Triathlon is a Middle Distance event aka a 70.3 aka a Half Ironman, it is also my first competitive swim in the sea, gulp, and it’s raining. Things do not start promisingly with a ten minute long swim out to the off shore start. I wasn’t expecting that sort of exhausting warm up and I’m not sure why it was necessary. Surely a beach start would have been far more exciting and in eye shot of the crowd.

The swim itself, all 1.9km of it, was actually quite fun, a bit like being on a rollercoaster. One minute I was surfing a wave, the next minute I was in mid air until I slapped back down into the water. It was tough swimming against the current but after the turn it's... wheeeeee... great fun swimming with the current. Then we have to go around again.

At some point I lose the five people I’ve been swimming with and end up on my own. As the swim takes me a very tardy 59 minutes, I assume they found a short cut.

Then on to the 87km bike and a very deadly exit from transition, where we are asked to turn right for a lap of the Great Orme (big Welsh hill thing) crossing the path of faster triathletes coming off the Orme and now heading off in the other direction.

Then when I’ve been round the Orme, I’m faced with the same hazard again because the Sprint race has now started and they are emerging from transition just as I try to pass. At least by now it’s stopped raining but the roads are still quite damp.

The rest of the bike course is hilly, very hilly, making the Orme look like a mere undulation. However I make good time and pass loads of people who are clearly finding it tougher than I am.

A marshal briefly throws a spanner in the works at the feed station when he chucks a bottle of sports drink at me. They’d been no information in advance on how the feed station would work, unlike at other races, and I have nowhere to put this extra bottle. I pull over, top up my own bottle from it and then chuck the extra one at the next marshal. Sorted.

Finally after what seems like an age, and is actually three hours and forty-nine minutes, I pull back into transition and go out on the 20km run. This too is hilly and takes us over the Little Orme (smaller Welsh hill thing) down to Penrhyn Bay.

We do two laps of this with a turnaround point on the promenade. Sadly the turnaround comes very early on the promenade and short of a full lap where there is no crowd, no L and no dogs because they were expecting this barely marked point to be somewhere more logical. It makes a lonely run, even lonelier.

I complete the run in 1:47 giving me a total time of 6:22 which doesn’t sound that great but it was a tough course. Sadly, hardly anyone notices when I cross the finish. There was no announcement of your name as you crossed the line like at other races and there wasn’t even a timing clock.

It would also have been nice to know that there would be only water available on the run. e.g there were no gels, no sports drink and no food items, any of which would have been nice. Still it was a decent event, although there’s plenty of scope for improvement.

In the evening we head out in Conwy without the dogs figuring Doggo, who’s had a hard day already, wouldn’t be up to the walk. I’m not sure I’m up to the walk either but I cope.

We eat at Y Bont aka the Bridge Inn in Conwy and then have a night cap in the Albion Ale House.

Our last day in Wales is Monday and we return to the Castle Hotel for breakfast before driving home.