Now as promised, a book review. Every so often I like to read a spot of popular fiction, I even read a Sophie Kinsella once you know but I’m not proud of the fact. So I’ve just finished ‘One Day’ by David Nicholls and I sort of liked it. 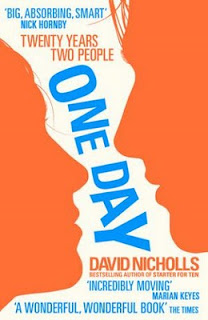 I liked the premise of the book. Following two people over twenty years through a glimpse into their lives on the same day every year, July 15th, St Swithin’s Day, sounded like a good idea. Although the book does cheat at times and sometimes summarises the whole year through that one day but then at other times Nicholls leaves you wondering what has happened in between by glossing over some vital developments because they didn't happen on that day.

The book starts with Emma and Dexter, thereafter simply Em and Dex, in bed together just after their graduation from Edinburgh University in 1988. The fact that nothing sexual happens in that bed that night is so unlikely that, for me anyway, it underlines the whole credibility of everything that follows. They both clearly want to get it together, yet not only do they pass up on the opportunity that night but they also fail to follow up on it in the weeks and months that follow as well. This, particularly as Dex is painted as such a womaniser, is just so implausible that it makes 1989 to about 1992 whizz by in a fog of disbelief.

Once I’d got over that gargantuan plot hole and what with being an un-romantic at heart, I decided I didn’t want them to get together anyway. Although I knew this was perhaps a vain hope having consumed some of the promo material for the film which billed it as a great romance. Instead I started to enjoy the book and its slice of real (ish) life.

I found the book very, very amusing but what really made it for me is that we start with their graduation in 1988, this being the same year I graduated and the book is full of anecdotes from that period. Then as we move on through the years, Nicholls drops in reference after cleverly observant reference about the culture of the 1990’s and what was happening in the world at that time. So it was quite a nostalgia fest for me, as I could live fully the time line of the book. With all the quotes in the book it surprises me that Dex never quoted from ‘When Harry Met Sally’ (released conveniently in 1989) that 'men and women can't be friends', before using it as an excuse to manoeuvre Em on to her back. Sadly he didn’t.

The two lead characters fit the old ‘different side of the tracks’ story line, Dex being rich and public school educated, whereas Em is a mere working class Yorkshire lass. They have different aspirations too.

Em, on the other hand, gets a first class degree and has grand plans but is utterly clueless as to how to achieve them, so she ends up waiting tables in a Mexican restaurant. She dabbles at being a teacher but really wants to be a writer. Lost and directionless, she decides no man is good enough for her and stumbles through life. She too is pretty unlikeable.

As the years go by they grow further apart rather than closer together and while Dex continually goes off the rails, Em never really gets on them. Although I nearly cheered when she had a totally out of character fling with the headmaster of her school.

Throughout the book Nicholls is constantly hinting that Dex needs a good woman (e.g. Em) to keep him on the straight and narrow. Although what both of them really need is a good hard slap around the face and a kick up the arse.

As a ‘will they or won't they’ story it’s either going to end in success or failure. Planning ahead my preferred ending was that they'd confess undying love to each other on Dex’s deathbed after he'd drunk and/or smoked himself to near extinction or maybe after someone had taken a sledgehammer to him.

But what actually happened is that in a bombshell moment in Paris, Em, again out of character again I felt, dumps her French lover for him. Then it all goes a bit normal with them breaking their promises not to live together, get married etc etc. To his credit Nicholls quickly seems to realise his mistake and rewrites the ending.

Having chosen to end it all with Em's demise, I didn’t see the point of him carrying on with the story. He should have wound it up with a short epilogue and the message ‘that’s what you get if you fanny around for 20 years’. I mean he has been on about ‘seize the day’, Carpe diem and all that malarkey, throughout the whole book and nobody ever did.

Instead of finishing though, the book went in to flashback just to annoy me, showing more of that first 15th July back in 1988. I have no idea why he held that back, withholding it added nothing and it should have been in its proper place in the first chapter. We also get Dexter reverting to type and going back off the rails, just to bang home the point about him needing his good woman as a guiding hand. It all spoilt what should have been a dramatic ending.

As soon as I finished the book I rushed to find a film review because surely they must have changed the ending into a happy one. I was very surprised to find that they hadn't. Hopefully after her death, they quickly roll the credits over shots of Dex tearfully going through twenty years of Em’s belongings, accompanied by some suitably sombre music. How good would that have been as an ending? But I bet they haven’t.
Posted by FitForNothing at Friday, September 30, 2011