A Report From Down South

Last Monday morning, well more like lunchtime, we headed south to the secret location of our training camp for next week’s Nottingham Half Marathon, or something like that. To start with, we have based ourselves at the not very imaginatively named Forest campsite in the middle of a forest. Rendlesham Forest. 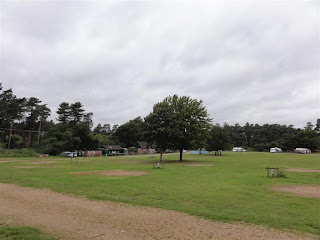 Little did we know that this is the site of reported sightings of unexplained lights and the alleged landing of a craft of 'unknown origin' in late 1980. It is perhaps the most famous UFO event to have happened in Britain and they have a ‘trail’ to celebrate it.

Oblivious to this fact we set up camp next door to a huge encampment that houses three border collies, their owners and a giant rabbit. Yep, the beer is good down here and perhaps we’ve already had too much of it.

A (short) two mile walk to the Oyster Inn at Butley yields four of the local delicacy, Adnams beers, but more specifically the 4.7% Broadside, which we are already well acquainted with, although at an eye-watering £3.60 a pint. Suppose we are 'down south'. The food is good too. Too good as it happens because I’m too full for their cheeseboard. The pub is dog friendly as well with Bonios on tap. So everyone is happy. Afterwards we wobble back home to the giant rabbit.

On Tuesday we awake to rain on the tent, then after skulking undercover as long as we can we emerge for a three mile 'training' run in the forest following the ‘red’ trail rather than the ‘UFO’ one. It’s a tapering week but my schedule says I should still run around twenty miles this week but for now three will have to do.

I’m not sure it was only three miles. Either the route was longer or we were very slow. Then we go for a (short) walk which gets longer when the cows which are now manning the WWII sea defences won't let us back inland. We have to back track which must have added at least a mile to our route. Thank heavens we’re near a pub and we aim for The Bell Inn at Boyton but it’s closed. Long since closed. 1999 apparently, although it’s still on the maps. oh well, it’s only a three mile walk, in the rain, to the Oyster Inn. So we head there again and I revive L with more Broadside.

They even provide a fitting sign to commemorate our walk. 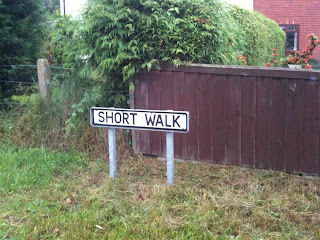 I reckon we’re done around 10 miles this afternoon, with the three this morning, that’s a half marathon. Training almost achieved.

We met this chap on the way. 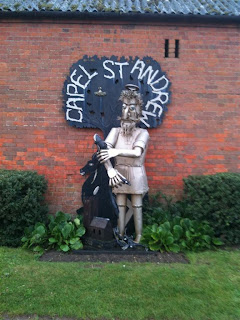 He is St Andrew the Fisherman of Capel St Andrew.

On Wednesday we up camp and move. Visiting scenic Aldeburgh on the way to Southwold. 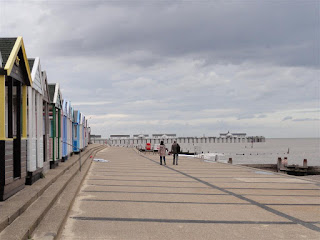 An interesting clock on the pier. 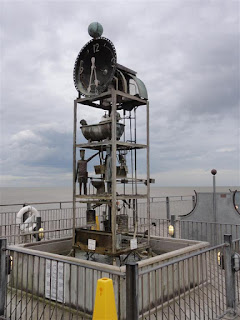 One of the pleasures of UK travel has always been moving into different brewery areas. Even more so these days with national brands taking over because areas where local breweries dominate are now harder to find. The prospect of a week drinking Adnams, who have their home in Southwold, didn't particularly excite me but how wrong I was as we camp in touching distance of the brewery. 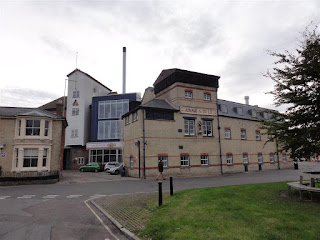 We know their bitter and the excellent Broadside of course but I wasn’t expecting to see seven different Adnams beers on in the Lord Nelson alone. They even have a dark one, the excellent Gun Hill, with which I instantly fall in love with. Named after this place. 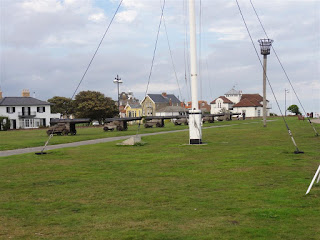 Thursday we visit Doggo’s twin brother in Lowestoft. It’s your typical family reunion. Familiarity, followed by mild elation, followed by OMG what now. A pleasant afternoon though, which is followed by the Red Lion, with another impressive Adnams range and better food than the Nelson. Again the food portions are huge which means that's now four days and still no cheeseboard. Scandalous.

Friday and I force L out of the house, sorry tent, for a 5k run with dogs. I ad-lib a rather impressive route with nothing but Google Maps on my mobile. Unfortunately Google Maps omits footpaths and we do it all on footpaths... So thanks Google for nothing. 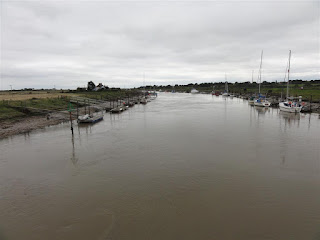 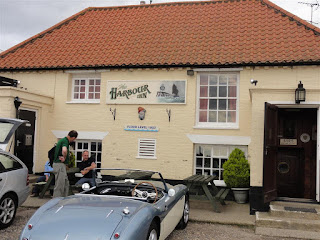 Only three Adnams beers here and not even a sniff of a cheeseboard but still a pleasant end to the week.

On Saturday we head home. We’re all a little sad as we were really impressed with Southwold. An old fashioned type seaside place without the fuss, the rides, the amusements or the kids, although the school holidays were already over. Of course the sadness might have something to do with the impending 13 miler on Sunday as well.

When we get home no one is as distraught to be back as MD, who is totally out of sorts. He seems gutted to be back to his garden, his ball and everything else. He just mopes around, worse than a post-holiday L and that’s saying something. I'm sure he’d thought we'd become nomads or something.