It’s dull, windy and miserable here in Bakewell but still oddly picturesque with the hills behind us.

The old man seems really up for it today as if he knows the dreaded ‘r’ word is imminent. Retirement. He was so quick on his first course that he had a pole down, which is practically unheard of. It’s a shame but good to see him going for it. He’s clear on his second course but unfortunately he’s expelled most of his ‘up for it’ on the first run and we’re outside the places. He's done now, over to MD.

There are loads of moans from competitors about the difficulty of the G3 course that is MD’s first run of the day. We though like a challenge, although perhaps I was not cautious enough on this course and MD has five faults when he comes off his dog walk sideways, seemingly looking for a short cut. The course yields only three clear rounds from 79 entrants. We are 9th with 5 faults which gets us a rosette and a cash prize of £5. Blimey. £5 for 9th, what would a win have been worth?

Glossing quickly over run two, we queue up for run three and are near the front when they call a lunch break and we are told to go away and come back later. That’s appalling ring management, if I may say so, speaking as someone who has run many a ring.

When we return after lunch it is now throwing it down and Doggo looks a little smug that he got all his runs in before it rained. Still, my little trooper does a clear round in the rain and had it not been for a bit of a 'moment' before the weaves which cost us a few seconds and a few places we might have even won it. We are 9th again. Another rosette but no cash this time. Run four... we’ll skip over that one too.

L is running in Keyworth, the Crossdale 10k, and up against the U23 GB canoe team. Not sure if they’re any good at running though. She is three minutes down on last year. ‘Shoot me now’, she proclaims, as she heads off to make a donation at the charity cake stall. Does she mean for the run or the cake?

Her time isn’t too bad considering she did have two working legs last year and she was supposed to be taking it easy. Then she’s off to Broadway for an afternoon of dark brooding passion and romance or rather Jayne Eyre, which I have declined, still not having recovered from the TV adaptation a couple of years ago.

Back home and an empty nest of course. So we can have our own dark brooding passion and romance if we want, or a bottle of wine, or I can cook a slap up two course meal for the two of us without worrying about feeding the five thousand. Perhaps a combination of all three after of course the cycling...

A stunning performance from everyone in the Great Britain team for keeping the race together and teeing it up for Mark Cavendish to do his stuff. Cav sprinting home to bring home the world title for the first time since 1965. 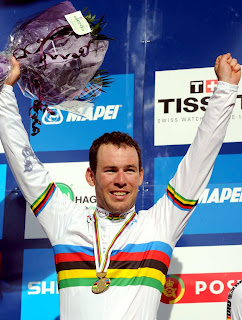