The feedback continues to roll in from Daughter; it was never like this with Son. She continues to get on with the farmers and Oxford rejects at Sheffield Hallam. Well that was what she was expecting them all to be.

Her housemates sound a fun bunch, and artistic people too, constructing cardboard genitalia (both sexes, very PC) to celebrate someone's birthday, along with a similarly decorated cake and the obligatory inflated condoms as improvised balloons. Very clichéd but I suppose it has to be done. They do say university brings out a new found maturity in people... eventually.

We both take Doggo to the vets so that they can have a look at this cyst (or whatever it is) that we’ve found. Strength in numbers in case he considers having the vet’s arm off if she starts prodding his rear end. I think he might have to have it scalpelled off. Meanwhile poor old MD's has to go through the whole drama queen rigmarole of being left all over again.

L then joins us on the park but I think we ruin her walk, which was to replace the fact she can’t run due to this injury she seems to have picked up.

Then running a bit late I head down to the Rescue Rooms. Welsh five piece Straight Lines seem to be going down well with the crowd as I push my way to the front. They also seem quite well known. There’s plenty of head bopping and even singing along. I’ve not come across them before and their punk/pop/hardcore blended sound could be described as sounding like everyone else’s but it wouldn’t be fair to say that on the few numbers I heard, so I won’t say it, I’ll just think it. 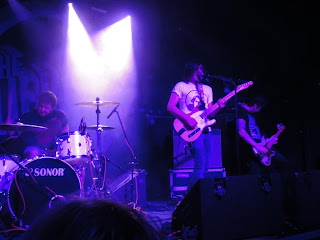 So to another band who could be accused of sounding like everyone else ‘The Subways’. I haven’t seen them for a while and I need to top up this year’s gig list, which is rather low, so I thought why not. They were rather good on the NME stage at the Leeds Fest in 2005, blimey that was a while ago. I saw them at Rock City a year later as well but now they’ve been downgraded a little to the Rescue Rooms. You may say the real reason I'm here is to get some photos of Charlotte Cooper, now a veteran at 25, but you’d be wrong of course.

Some things have changed. Rock City’s little brother ‘The Rig’ is now the ‘Black Cherry Lounge’ and the stage at Rescue Rooms now goes all the way across. Bigger. Tidier. Better? In a summer refit the steps have gone, the bar moved and balcony access is now no longer from some secret door at the back of the main bar where you had to utter ‘Phil sent me’ or something, to get in. The place now finally looks like a gig venue rather than an afterthought. They’ve even got real ale on the bar for crikes sake, heady days indeed.

So some things change but in a way it’s comforting that The Subways haven’t. The band bounce on stage to Gene Wilder’s ‘Pure Imagination’, then bounce their way through early single ‘Oh Yeah’ and basically don’t stop bouncing throughout the night.

Songs from their heavier second album ‘All or Nothing’ rub shoulders with the poppier sound of their debut ‘Young For Eternity’, in pretty much an even split of tracks between the two. In between they mix in a some tracks from their new album, released just yesterday, the style of which seems to fall somewhere between the two. 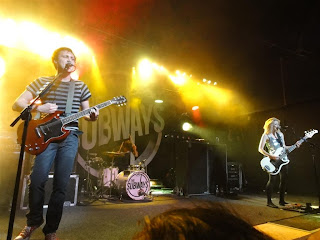 Isn’t there something great about threesomes, I mean three pieces. Concise, raw... limited yet eminently appealing.

Vocalist Billy Lunn tells us ‘Mary’ is about his mum and then goes off for another charge around the stage, passing bassist Charlotte Cooper on the way as she charges in the opposite direction, head banging, hair tossing with her bass guitar. 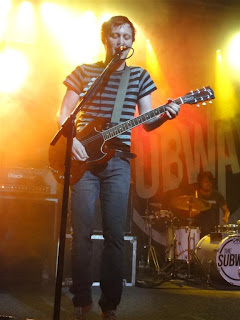 Billy's younger brother Josh bangs the drums. Legend has it that he was such a wild kid at home that his parents got him a drum kit to channel that wildness. I think he’s still got that drum kit because it’s kind of a mini set. The type they used so sell in the toy section in the back of the Argos catalogue, perhaps.

The new album ‘Money and Celebrity’, takes a pop at celebrity culture with tracks like current single ‘We Don't Need Money to Have a Good Time’ which provokes another a surge of energy from the crowd. As does the older ‘Shake! Shake!’ which goes down a storm with lots of, well, shaking.

The best moments are the older ones though, the slow building ‘I Want to Hear What You Have Got to Say’ being rolled into ‘Rock and Roll Queen’ was a clear highlight.

Billy and Charlotte stand some distance apart tonight on the somehow bigger Rescue Rooms stage, making it difficult to photograph them together. I’m sure this is the norm and not indicative of their eight year romance that ended sometime ago in marriage, to other people. Their relationship now appears cordial, friendly but also businesslike and lacks some of the on stage chemistry of before. 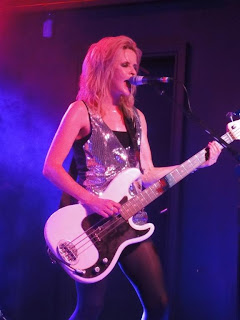 I was particularly surprised to hear that Billy had recently got hitched because he’s cheating on his missus already, tonight Billy is truly, madly, deeply in love with his audience. He urges them to get a ‘circle pit’ going to ‘Turnaround’. After a few false starts, due possibly to a lack of understanding (honestly, youngsters today), they finally get it going. Then after a resounding ‘With You’ they’re off without a word, which I thought was a tad rude.

They return for an encore that opens with ‘Kalifornia’ and continues into ‘At 1 am’ at which point something comes whizzing past my ear and lands on the stage. A bra, a very large bra, in fact a scarily large one. So large that I daren’t turnaround to speculate on the owner of such a huge garment. Clearly our freshly married man isn’t impressed either, as he kicks it into touch. Instead he strips off his own top and dives headlong into the crowd. They catch him and carry him aloft as the band close with ‘It's a Party’, a song about how awesome a party they have on tour.

The Subways remain mostly unvaried but a more upbeat rock band you could not wish for. They also put more energy into tonight’s performance than a lot of bands put into a lifetime of touring. They’re a band clearly enjoying what they do. Though I still think they may need to move on a touch to survive, if they get time amongst married life of course.
Posted by FitForNothing at Wednesday, September 21, 2011