Derby 3 Millwall 0. I don’t really understand this. Six wins out of eight and third in the league. It’s encouraging if nothing else and a sign that perhaps we should avoid relegation more easily this year but I’m not reading anything more into it. The more testing run of fixtures that we have coming up will be very interesting.

Now I remember the 1970’s BBC TV Series of John le Carre's 'Tinker, Tailor, Soldier, Spy'. I vaguely recall it at the time but have re-watched it since, although even that would have been some time ago. I found the series fascinating but it also baffled the hell out of me and that was a seven part series that had over five hours to tame the meandering plot. The new film version however intends to do this in just over two hours...

So perhaps they’ll cut out those long pregnant pauses of unspoken dialogue and those lingering meaningful stares that didn’t convey very much... Nope.

Like the TV series the film nonchalantly tosses little bits of raw information or ‘hints’ at it’s largely unsuspecting audience and says make of that what you will. It is not big on explanations. In fact so little is made of the revelation of some vitally important points that you’re likely to miss them. So concentrate, don’t blink. Don’t even think about going to the toilet.

Essentially there is a double agent, a mole, amongst the heads of British intelligence, known here as the ‘Circus’. At the time all this was very current affairs, now it’s a 1970’s cold war history lesson. Jim Prideaux (Mark Strong) is sent to Budapest by boss man ‘Control’ (John Hurt), to bring in a Hungarian General who wants to defect to the west and will reveal the mole's identity but the meeting is a set-up. 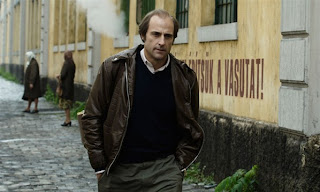 The meeting at a Budapest cafe ends with Prideaux shot and taken away to endure months of vicious interrogation, cue a particularly shocking scene, before he is eventually returned to Britain where he is ‘retired’ to live in a tatty caravan and to teach at a public school. Which is very 1970’s, these days even public schools don’t employ shady men who invite young boys into their caravans.

Back at the Circus, Control has died and his deputy George Smiley (Gary Oldman) has been forced to retire in shame at the botched operation. Yet the investigation is reopened when agent Ricki Tarr (Tom Hardy), a loose cannon if ever there was one, turns up with pillow talk corroboration of the mole theory gleaned from a love affair with the wife of a Russian intelligence officer he was tracking. Smiley is subsequently drawn out retirement to track down the mole.

Tarr promises to help Smiley, if he can reunite him with his Russian blonde, a promise he cannot possibly keep. Smiley’s suspicions fall on four men:- Percy Alleline (Toby Jones), who is now head of the Circus and three other top ranking officials, Bill Haydon (Colin Firth), Roy Bland (Ciaran Hinds) and Toby Esterhase (David Dencik). 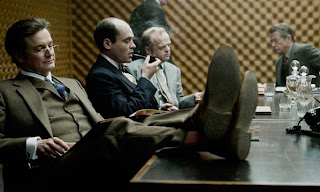 I’m giving a more linear version here, which the film does not, instead relying on the dreaded flashback. You soon lose count of how many times we end up back at that Lenin themed staff Christmas party.

Assisted by Peter Guillam (Benedict Cumberbatch), Smiley investigates. Talking to the increasingly bitter Prideaux and the sacked head of research Connie Sachs (Kathy Burke) who suspects that the Soviet Cultural Attaché in London is really a spy. Smiley discovers that pages have been removed from the duty officer's log book for the night Jim Prideaux was shot. So he speaks to the duty officer himself, who tells him who was the man in charge that night... 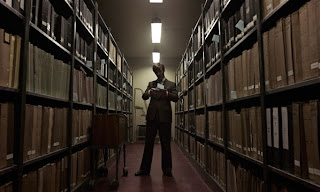 The Circus's Russian intelligence source ‘Merlin’ is looking increasingly dodgy as indeed is the entire operation coded name ‘Witchcraft’. Now who was the man responsible for that, and could the same man simply be shagging Smiley's wife to make any accusations levelled at him by Smiley look like sour grapes.

Having gleaned enough, Smiley set a trap and catches the traitor. If you’ve not blinked the mole’s identity is no great shock and perhaps that’s part of the problem with the film. I think perhaps the film makers knew it too and jazzed up what happened next. 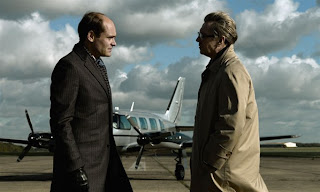 Some say this is a masterpiece. So you're supposed to describe it as compelling, tense, absorbing, involving etc etc and in some ways it was. Some would say dull. In reality, it's probably somewhere in between. It’s well made with strong performances all round. Gary Oldman's portrayal of Alec Guinness, sorry Smiley is excellent. Just gen up big time before you see it.

Posted by FitForNothing at Saturday, September 24, 2011