Running In The Best City To Run In

I struggle to sleep due to a sore back, which doesn't bode well at all. A week in a tent and the back’s fine but as soon as I get in a comfy bed it falls apart.

So to today’s half marathon in the place which has been crowned the best city to run in the UK. The tannoy keeps telling us this, so it must be true. I can’t say I agree but I haven’t ran regularly anywhere else, so I assume all the other cities must be worse.

There’s a field of around 7,000 for the main two races, the full and half marathons and the start is a bit more chaotic than I remember from last year. Perhaps because of the use of metal barriers on the start pens, which rather than encouraging people to get in their right start areas I think has the opposite effect and you simply get in where you can.

Once we've started though, the brilliant organisation kicks in and it's this along with the excellent support of the spectators and marshals, that makes this such a good race.

It took a mile to get in my stride which isn’t too bad I suppose. My stride being 7.15 per mile pace. Which I hold quite well at first. I’m slightly up at 3 miles and then on pace until 8 miles. Then it collapses a bit. Nothing over 8.00 mind, which is encouraging, although 7.59 for mile 12 was edging it a bit. Mostly my last five miles are in the 7.25-7.40 window, which means simply that I must train harder.

My excuse is that for some reason it seemed hillier this year. L says not. Well at least not until the end where the finish has been made more interesting due to the flood defence work. They zigzag us though the new flood wall before finally taking us up and over it on a steel ramp. It was nearly one hill too far and then still you can’t see the finish because it’s off to the side but eventually I staggered over it.

1 hour 37 minutes is a minute down on my PB set last year but a best for this year, so I can’t be too dismayed or perhaps I can. I’ll ponder that over a pint later.

The goody bag was a bit pathetic again, for what isn't a cheap race. Some cleaning cloths and toothpaste might come in useful but it’s hardly much of a reward for thirteen miles. Thank heavens for the pack of crisps and the mars bar...

The medal is ok, if you like medals, personally I don't and I’d rather have a t-shirt or one of the much maligned and now axed lace panels but probably just because I’ve never had one. 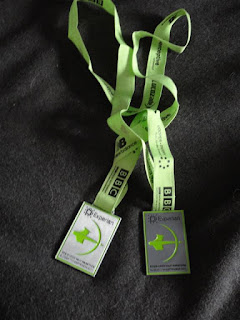 L's quick, a lot quicker than at Leek but a bit slower than at Newark. So she's not happy. She sounds so like me. Today's thirteen miles takes her total over the 200.

By the time we’ve lingered a while to watch some finishers and exited the car park, which takes more than a while, we only have time for a quick spruce up before playing chauffeur to Son’s luggage as we hike it over to his new place in Leamington Spa. I make L drive there on her tired legs, my tired legs bring us back and we didn’t even get a cup of tea. No kettle... or milk apparently... or will.

Finally make it back home and we get to have a debrief in the local.