Today we head over the Lichfield for the Half Marathon. It’s just me running with L and the boys supporting. The race starts at King Edward VI School, which is the same place that we did the 10k from. They recommend you park there and then they will bus you back from the finish which is on grass land near the town centre.

We do things the other way around and park in a car park very close to the finish. Then we walk to the start, where I warm up with both dogs and even do the aerobic warm up with MD.

Conditions are warm but the course is largely flat with a bit of an incline in the last few miles.

My race goes pretty well and I was on for a pretty good time until we reached what is known as Fine Lane Level Crossing. Apparently in the entire seven year history of the race, a train has never gone over this railway crossing during the race but it does today. Apparently a farmer’s fence not far from Lichfield got damaged and several cows wondered on to the main line, causing subsequent trains to be diverted on to this line.

I am held up for six minutes which turns my potential finishing time of around 1:42 into 1:48:41. There was one solitary marshal at the crossing attempting to take everyone’s numbers who got held up but there were far too many runners to take note of and I’ve no idea how they’d work out how long everyone was held up anyway. Many people claim they didn’t even see a marshal to give their number to.

Later, when the results go up, I see that my time hasn’t been adjusted but there isn’t really much point making an issue of it, they will really have no idea how long people were detained and everyone will have self-timed anyway. L says she would have loved a six-minute rest break mid-race.

Today it’s the last rites of the football season, thankfully for Derby it’s now finally all over.

In the evening, we go to Broadway for some food, a couple of pints of Supreme and Lady MacBeth, which is our second sex film of the week.

‘Lady Macbeth’ is an adaptation of Nikolai Leskov’s 1865 novel which was itself inspired by Shakespeare’s own Macbeth. It has also been adapted by Shostakovich in 1934 as an opera and by Andrzej Wajda in 1962 as a film. However, nobody has before moved the setting from a bleak Russian landscape to an equally bleak one in the North East of England.

Katherine (Florence Pugh) has been sold by her father as part of a package deal with some land to wealthy mine owner Boris (Christopher Fairbank), who marries her off to his middle-aged son Alexander (Paul Hilton).

It is an arranged marriage that goes awry right from the off. Alexander, who seems less than enamoured with Katherine, totally fails to understand the concept of the wedding night, preferring to tell his new bride to strip and face the wall while he jerks off rather than consummate the marriage in the traditional way.

It is clear that Boris is in charge and he insists that Katherine is an obedient wife who will remain indoors at all times and isn’t allowed to lift a finger around the house as this is purely the job of the servants. So, she becomes bored very quickly and feels very much a prisoner in the secluded manor house. 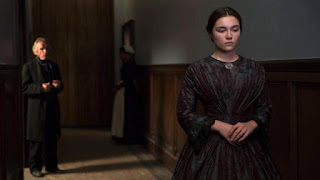 When both Boris and Alexander are called away on business, Katherine sets about drinking the wine cellar dry but also takes the opportunity to get out more. At which point she stumbles across the stable hands stringing up the maid (Naomi Ackie) naked in the barn. Despite this, Katherine seems quite taken with one particular stable hand called Sebastian (Cosmo Jarvis) who appears to be the instigator the maid’s assault.

Clearly expecting this to have serious consequences for him, I guess he figures he might as well be hung for a sheep as for a lamb, so later he forces himself into Katherine’s bedroom and then onto her. She resists his advances for all of thirty seconds before submitting enthusiastically and suddenly the marital bed is finally seeing some action but, oh dear, suggesting that women like to be overpowered by forceful men isn’t very PC. 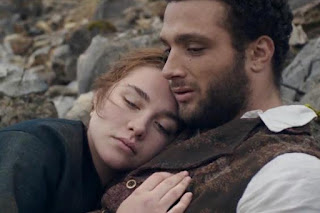 So now Katherine has something to be less gloomy about, not only is she Lady of the Manor by default while her menfolk are away she has sex on tap as well. Until Boris returns.

Not willing to give up her newfound status, a murderous dodgy batch of mushrooms does for Boris but then Alexander returns. He says he knows all about her whoring ways and Katherine doesn’t deny it. In fact, she wheels out Sebastian to give her husband a demonstration first hand. After which things don't end well for Alexander either. 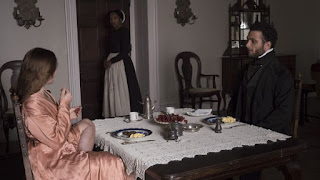 Peace at last or perhaps not. Out of the blue a woman appears with a child she claims is Alexander's, so he did know what to do after all. Oddly Katherine lets them both move in but soon gets fed up of her new lodgers and, if the film wasn't already un-PC enough, she suffocates the child to death.

So, this is no when Katherine met Sebastian romance, and by now he’s starting to realise it and tries to come clean but Katherine will have none of that.

It’s a fascinating film which causes you to rapidly shift allegiances. At first, it's impossible not to sympathize with Katherine, saddled in a life with two horrible older men. Until it becomes clear that Katherine is just as heartless once she gains a position of power, to the extent that she betrays the very servants she once had sympathy for.

Excellent stuff and Florence Pugh makes a magnificent psychopath.
Afterwards we walk up to Daughter’s local, The Doctors Orders and meet her there. We have a couple more drinks before getting a bus back into town and then another one home.