L skips her Pilates so all four of us head off to the Outlaw Half registration. We do have the added excitement of taking some stuff to the tip on the way.

It’s another foul day and the rain is hammering on the roof of the registration tent as they give out the pre-race briefing. I am sure you can imagine the gallows humour. I just hope it's better tomorrow.

L appears to have the perfect ‘take you mind off your uber-event’ idea, a good old weepie. A Dog's Purpose is out. The latest showing is at Cineworld is 4:40pm but we get a move on and make it in time and of course this means we can all be tucked up nice and early in bed afterwards. Wa-Hey.

A Dog's Purpose is all about the finding the meaning of life for dogs, yes really. It is based on the book by W Bruce Cameron.

Our canine star is first a homeless puppy on the streets who is caught, taken to the dog pound and euthanised. Nice start. He is then born into a second life where initially it doesn’t look like he’s going to fair much better when a couple of bin men leave him to cook in their vehicle. He is rescued by a young boy called Ethan (Bryce Gheisar) and his mother (Juliet Rylance). It is at their house that our hero, now called Bailey, makes his home despite the reluctance of the boy’s miserable and alcoholic father (Luke Kirby). 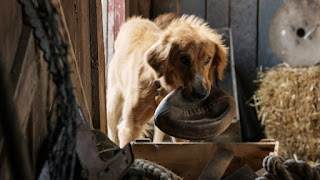 With his paws under the table Bailey (voiced by Josh Gad) has a good long life while all the time trying to work out why he’s here and how entertaining he can be with a flat leather football. 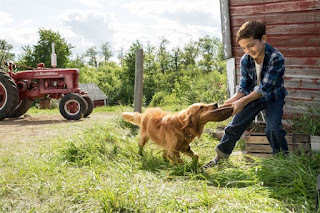 Of course his owner Ethan (now played by KJ Apa) has to go and self destruct as people always do in this sort of film. Ethan’s football career goes awry due to injury so he thinks why not make myself even more miserable by sacking my girlfriend, the lovely Hannah (Britt Robertson), for no good reason. Oh go on then. We can always get back together at the end of the film.

Bailey sadly dies of old age and be warned, by the very nature of its plot there's an awful lot of doggie death in this film.

Then Bailey, or whatever he’s called now, is back again and again. Each time as a different breed, sometimes with a different gender but always with the same off-camera voice. He becomes a police dog before being owned by a lonely student, neglected by a young couple and then as a faithful companion to a farmer. 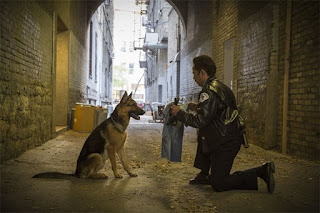 Each rebirth is with decreasing effect, cheesier jokes and shorter storylines. Ultimately this makes the film a complete mish-mash as there is never enough time spent in each of the dogs’ or humans’, not that you'd want to. However, none of this is important because the whole point is to take the dog eventually back to the beginning. 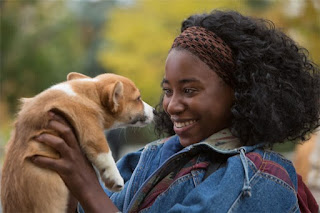 So eventually he returns to Ethan (now Dennis Quaid), who still has the same flat leather football in his garage, and surprise surprise he is still down on his luck. I might as well spell it out because you will, no doubt, have already gathered what this particular dog’s purpose is. Namely to get Ethan and Hannah (now Peggy Lipton) back together. 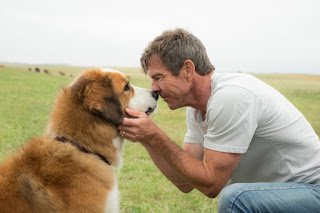 Mission accomplished then. Many tears will be shed and not just over such a terrible plot, holding onto your lunch may not be so easy.

A nice idea for a film maybe, but poorly executed and to be honest a bit of an insult to dogs and their owners.