The King of Soho


L skips Parkrun but its still a fairly early morning because Sky TV are forcing all the league games to kick off at 12:45 today. AM I assume, although I haven't doubled checked.

It turns out to be a typical drab end of season game and you get the distinct impression that both sides would have happily shook hands on a 0-0 draw. Especially Millwall, who need a point to guarantee survival and at one stage with the three teams just below them all winning they are in dire straits if they don’t hang on to it. Derby are not in the relegation dog fight but only by one point, such is the crazy closeness of the league.

By the time much maligned striker Conor Sammon comes off the bench to score an unexpected winner for Derby, the Londoners no longer need that point as results elsewhere go their way.

In the evening we head to Broadway, have a few drinks, a meal and watch the Look Of Love.

The film opens with Raymond (Steve Coogan) mourning the loss of his beloved daughter, watching old video recordings and reflecting back on his life, as in flashback we get the Paul Raymond story.

Raymond went from humble beginnings in Liverpool to being a success in London where he put on a show featuring nude models as statues, the law prevented nudes moving around on stage at that time. Then he moved on to greater success with his Gentlemen’s Clubs, the sex comedy Pyjama Tops and Men Only magazine. With each new project he pushed further against the boundaries of public decency. 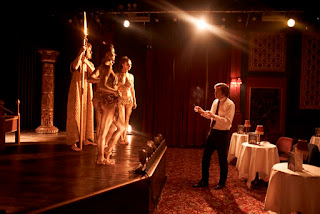 He was though a shrewd businessman, who ignored the countless bad reviews and criticisms. He simply got on with making money, lots of it, and was smart enough to reinvest it in property; most notably in Soho and he became Britain's richest man.

Initially helping him run his business was his wife Jean (Anna Friel) but he wasn't a man who was good at relationships. Whether that was with his own children or with the women in his life and there were plenty of them. 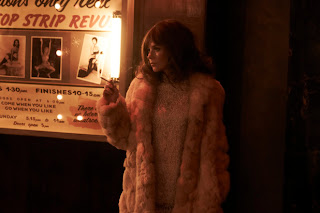 At first Jean tolerated his countless affairs with the women who worked for him. That is until he meets Amber (Tamsin Egerton), who later becomes Fiona Richmond and the editor of Men Only, his relationship with her results in the largest divorce settlement in British history. 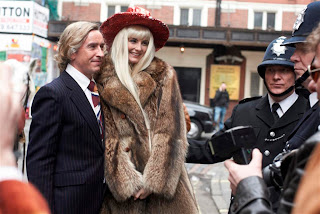 Amber’s advantage over Jean was that she had no problem with three in the bed romps, as long as she was part of them. Well at first she didn’t, eventually she leaves him too.

Meanwhile he is mostly ambivalent to the existence of his children, save for his Daughter Debbie (Imogen Poots) and it is his relationship with her that is central to most of the story. He dotes on her but even there he condones the drug habit that ultimately kills her. 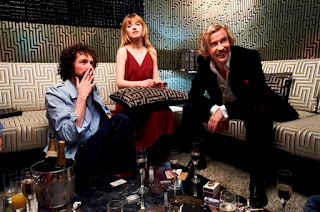 Although Raymond was fascinating figure, he wasn't a terribly likeable one and despite the money, the women on tap and the power, he never seemed genuinely happy. Except that is when he was with his daughter and he gives her a leg up to her death. After which he became a virtual recluse until his own death.

The film is an interesting watch but a bit lifeless. Surprisingly it lacks drama and even plot, possibly the process of condensing his colourful life down to first be book sized and then further to be film sized didn’t leave much, other than a long list of bullet points. The film ended up being more informative than entertaining.