We depart the dog show at Barnard Castle, put on an audiobook and head north. Well first we go sideways a bit, heading across the A66 for supplies in Penrith before heading up the trusty M6/M74 to Glasgow and then beyond. The big question is will the car’s dodgy exhaust survive the week.

We get up to just beyond Stirling before stopping for the night at Strathyre where The Inn at Strathyre is chosen from the Camra Beer Guide which will be our Sat Nav for the week. Back in the day our trips were always done from Camra pub to Camra pub and it never failed us. Will the same still apply? So far so good.

On Monday we reach Inverness and stay at the rather busy Bunchrew Caravan Park. Not that that fazes the Campsite Breakfast bar which shuts religiously dead on 10am no matter how huge its queue is. Seemingly they don’t want our money.

Nor does the local pub, which says it is fully booked despite countless spare tables that apparently aren’t for eating. The Waterfront Pub back in Inverness fits us in though and provides an excellent smoked Haddock dish that I may need to replicate at home. 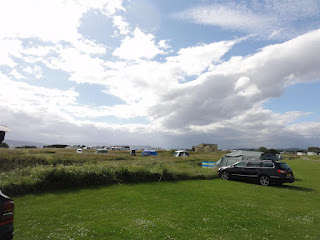 In the morning we stock up on alcohol in Inverness and move on. Then we stock up again at Dalmore Distillery in Alness, which provides the touring bottle of whiskey. In the evening we pull into Dornock Caravan Park and stay the night there. There are some interesting pubs in Dornock but none will allow dogs in so we end up eating an Indian Takeaway in the tent which the boys love.

On Wednesday we reach the extreme north and visit John O’Groats. Its 30 years since I’ve been here. 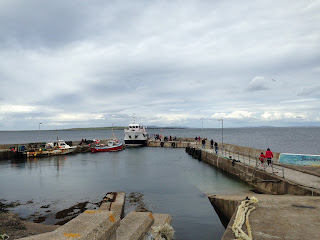 Back then there was just a camp site, an inhospitable hotel with a grumpy landlord and the obligatory ‘end of the world’ sign. I think there may have been a tatty gift shop as well. 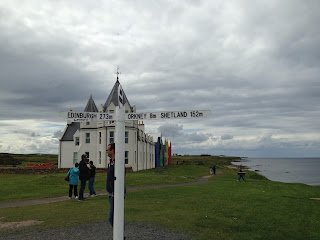 Well, they’ve spruced the place up a bit. The camp site remains the same but the hotel has been consumed in to a ‘complex’ and presumably the grumpy landlord has retired. 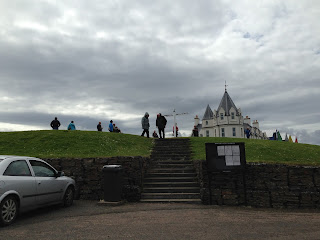 We move on to Thurso and the Thurso Bay Caravan Park. We eat in the Holborn Hotel and have the best beer so far with Orkney Dark Island. One thing we’re spotting so far is an absence of Scots. Most of the camp sites and bars are run by English people and most of the visitors are either Italians, Spanish, French, Germans or English. 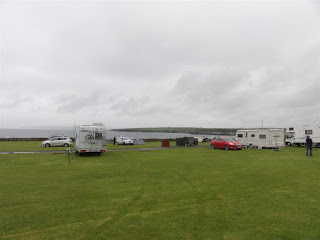 We continue our policy of a full English (or Scottish) breakfast every day in the camp sites Blue Door Coffee Shop where the waitress with the Scottish accent turns out to be from Hereford. 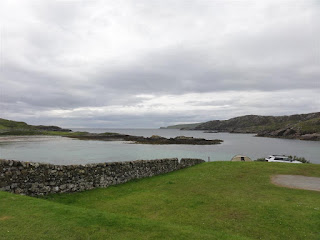 Thursday’s destination is Scourie Bay and for drinks the Scourie Hotel. On Friday we head back down the coast and to a Caravan club site in Kinlochewe. This is an excellent location near the Torridon Mountains which may be worth a prolonged stay in the future. The Kinlochewe Hotel is the place for drinks and food. They don’t let us in at first but we get a table eventually, although they are not busy by the usual definition.

Saturday is Bunroy Park at Roy Bridge just north of Fort William and the Stronlossit Inn at the end of their road is the evening destination. The Inn has the rather nice Calendonian Wild Cat beer on. There are for the first time for a week a few midges about but nothing too fearsome and easily dealt with by the on site Midge-eater machines.

The next day is the traditional visit to Morrisons in Fort William and we even pop into the Clachaig for a swift one. Then in order to support their new venture we camp at the Glencoe ski centre much to the surprise of the staff who warn of the killer midges. Shouldn’t be a problem and there’s plenty of other folk camping with us, so it can't be that bad. We eat in the café and drink bottles of Dark Island before heading outside to face our doom. 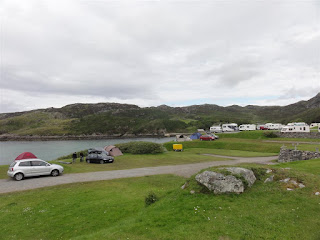 Having managed to burn, smoother or squash all the midges that make it into the tent we survive the night but on Monday morning they fight back and force us off site. We literally throw everything in the car any old how and drive south down the A82 as quickly as fast as the car will go. The car is sounding ever dodgier but has survived the week, although the right Indicator is now playing up. It’s possibly only when we get as far as Tyndrum that we feel safe.

We negotiate the new Crianlarich bypass and the new road around Loch Lomond before one final Full English prior to Glasgow. Some of the breakfasts have been quite healthy and some haven’t, still we are not quite heading home looking like a pair of haggises.
Posted by FitForNothing at Monday, August 10, 2015