It's Bank Holiday Monday and another quiet day for us. I think the morning again disappears before we get out of bed.

Today is Broadway Cinema's 25th Birthday and to celebrate they are doing a 2-4-1 on tickets. So we book to see 'Mistress America' only to be told when we get there that it isn't actually on at the time we've booked. We swap the tickets for '45 Years' and get two free tickets handed us as well. So it becomes a 4-4-1. Not bad. Happy Birthday Broadway.


Kate Mercer (Charlotte Rampling) has been married to Geoff (Tom Courtenay) for almost 45 years and their wedding anniversary is looming. Plans are well advanced for a party to celebrate when Geoff gets a letter written which reveals that the body of his pregnant former girlfriend, Katja, who fell into a glacier in the Swiss mountains in the early 1960s, has been discovered, perfectly preserved in the ice. 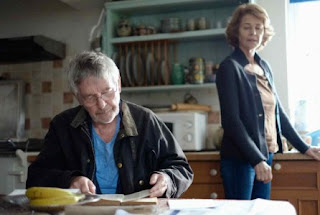 Now, this to me would have triggered an immediate trip to Switzerland to pay my final respects to my ex with hopefully my partner alongside me for support but this isn’t how it plays out.

Geoff hasn’t told his wife about Katja, ever. Whoops. Not that you’d think that would matter much as the relationship was done and dusted, albeit in tragic circumstances, before he even met Kate.

However Geoff retreats into himself, reflecting back on things and contemplating how his life might turned out had she not died. It’s as if he hasn’t thought of the girl in the last 45 years, which I’m sure wouldn’t have been the case.

Kate meanwhile is green eyed with jealousy and mistrust at this girl who has accidentally discovered eternal youth. Yet Katja is dead, it's a good job he didn't get a letter about an ex who was still alive.

She goes to the lengths of digging Geoff's old photos of the fateful trip to Switzerland out in the loft and viewing them on the slide projector. The fact that these are so easily accessible sort of hints there was no big secret here but for some reason she has never bothered to look before. 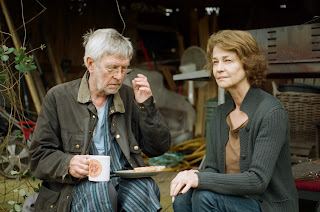 The similarity of their names and the fact that the couple don't really have any photographs of themselves hints at a deeper conspiracy on Geoff's part but doesn't really convince. Isn't Kate capable of taking her own photos? Then again, probably not.

It’s also a bit one-sided, there is no mention of any former life or lovers that Kate may have enjoyed pre-Geoff. Then again, she probably didn’t.

All this happens amidst their perfect but mundane life on the edge of the Norfolk Broads. e.g shopping trips are interspersed with Geoff's failing efforts to fix the lavatory.

I am sure had this happened to me, once I'd got over the grief, it's the sort of thing I'd have used as a chat up line. Guess what happened to my last girlfriend, she ended up in a crevasse in the Alps ha ha. I'd still be single obviously. Then I’m a great believer in fate, not matter how tragic. 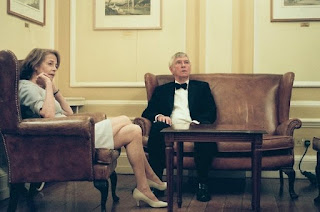 45 Years is a simple slow-burning and deliberately enigmatic film which is I guess supposed to be its strength but it is also its failing. Technically this is a good, well-acted film, just not a very exciting one.

Afterwards we head to the Crafty Crow where we consider eating but don't. Instead we head to the Blue Monkey where the Chocolate Gorilla is on. Yay. L finally faces down her Monkey demons, tries some and becomes a convert.

Then to finish off, a takeaway from the Park Tandoori.
Posted by FitForNothing at Monday, August 31, 2015