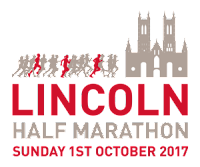 Well it could have been Malmo but it wasn’t to be and now here we are in Lincoln instead. Malmo was a tentatively plan for my 50th Birthday running teat but it just proved too difficult to get over there for a weekend. I need to start planning further out next time and by which point L should be fit enough to play a full part.

My entry to Lincoln went in very late and at first it looked like they were going to make me drive over to Lincoln on Saturday just to pick my number up but they relented. As it turns out there are loads of people collecting their numbers on the day. It is a day that starts very dull and rainy but it does fine up by start time.

This is the second running of the event which starts at the Lincoln Showground which we know well from the many dog shows that are held there.

You can see why they held the start and finish out at the Showground but it’s a bit of a dull run in to Lincoln itself from there. It’s also surprisingly not very supporter friendly because the start was a fair old hike from race HQ as it was held on the far periphery of the showground and supporters also weren't allowed past the finish line to watch us complete it.

However, once the race got into Lincoln it was great. There was plenty of support there and an interesting section on the river front, followed by lovely big hill up to the Castle and then a nice little cobbled section.

Then there’s the long dull run back to the Showground and a final stretch along the very gravelly access road which hurts my feet. It makes me think I some less minimalist trainers for my marathon, which isn’t really what you’re supposed to do two weeks out from a race.

I cross the line in a reasonable 01:45 to be handed the traditional pint of Erdinger Alcohol free.

In the evening we tour Canning Circus and finish off with a curry from the Park Tandoori.