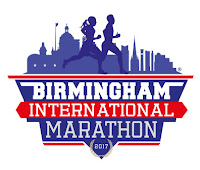 So... Marathon day. Naturally we would have preferred to have gone by train but despite this being the 21st Century the country is still unable to run these things before 9am on a Sunday. So we drive there, although we do get a great parking spot right in the centre of Birmingham. From where I get the shuttle bus to the start at the Alexander Stadium while L starts limbering up in readiness for the shops opening.

I have printed her off a map of the route, on which she complains that they haven’t marked Waterstones. They’ve not marked much to be fair but I’m sure she’ll cope.

There are two start times 8.30am and 9.30am. As a Marathon virgin I have been placed in the latter category. It would have nice if everyone could have started together but I guess the current start area simply isn't big enough.

I line up wearing my new barely broken in trainers behind two girls who have labels on their backs saying ‘I’m running for...’ erm ‘Gin’ and ‘Sex’. I suppose it’s a conversation starter but no one’s talking at the moment everyone looks far too worried for chitchat.

This is the rebirth of the Birmingham Marathon. The original, known as the People’s Marathon, started in 1980 which was a year before the inception of the London Marathon. It ran for six years until 1985 and apparently included the M42 (before it was finished). Now it’s back.

So off we go. I like the course which runs us into the city centre before a two lap loop of a large chunk of the usual Half Marathon course. This included Cannon Hill Park, Cadburys and the Edgbaston Cricket Ground. Plenty of people didn’t like the two lap bit but I do like to know where I’m going, as I did second time around. I wouldn’t have wanted to do a third though.

I set off at nine minute mile pace as planned but clearly subconsciously I found this simply too pedestrian as I soon speeded up. Suddenly not four hours but three hours fifty minutes looks briefly on but only briefly.

The atmosphere was good and there were plenty of designated ‘cheering points’ but there were actually plenty of people cheering all the way around at presumably unauthorised points. The route could have perhaps done with a few more bands and there was also no beer stop like at the Great North Run. So they’ll have to sort that omission out.

By half way I have used up all the energy gels I had carried with me and L hands me a few more as I push into the uncharted waters of the second half marathon of the marathon. They are handing gels out at a few points but it would be better if they were available at all the feed stations and a sports drink would be nice too.

I had left a sports bar with L but I don’t take it, which was probably a mistake, as I do start to feel a bit low on energy and start taking jelly babies off the crowd. I discover that it you nibble them slowly you don’t choke on them, which is a bonus. However Haribos and wine gums turn out to be deadly. They are totally inedible and chewy, so I spit them out and go begging for more jelly babies.

Things are going really well until I suffer a minor meltdown at 24 miles. Is this what they call ‘The Wall’? To be honest it’s more of a privet hedge. I start feeling a bit light headed, so I walk for a bit and pour water over my head. This ruins my target time and I slip outside four hours pace as I finish in 4:02.

Bizarrely Erdinger hadn’t sponsored this one and they hand me a bottle of water when I cross the line. How quaint and old fashioned. It was only the one bottle though, which wasn’t enough and I downed mine in one go. I very nearly had to cause a scene in the Sack Of Potatoes pub in order to obtain more fluids.

That’s where I end up by the way, on the grass outside said pub, which is just out of crawling range. Apart from more water, I would have liked a massage but although I can see the sign it might as well be several miles away.

I have informed L where I am and now I await rescue. She says don’t move. That’s easy, I can’t move. She soon found me because she recognised my legs sticking out from under the park bench. I had tried to sit on the bench but hadn’t quite managed it.

I have raided the Goodie Bag but I have to say if this is your typical Marathon Goodie Bag then I’m disappointed. There’s barely anything to eat in it and not much to drink either but I do love the T-shirt.

To top it all Derby beat Forest 2-0, with my brother sat in my seat. However, the gloss somewhat goes off the day when I get a text to say that an old school friend of mine, who I still see regularly, has gone missing.

Later I finally get to refuel with a night in the Crafty Crow.