I’m on the bike, which was good although a bit colder than I expected. L is in the pool, complaining how unfit she is. Doggo is ok but not eating much and contributing several puddles. While MD is asking to have something spherical pushed down his throat. So everything is normal basically.

At work there is something distressingly festive in the air as the Secret Santa email arrives, that’s all we need. This year it is to be combined with Christmas Jumper day. What joy.

In the evening, I dig in the back of the wardrobe for my dungarees but thankfully I can’t find them as we head off out while Daughter dog sits. Yes, I am a little out of my comfort zone tonight.

I know this because I’m at the NIA in Birmingham, or whatever it’s called this week, and the two women in front of me are wearing flashing red devil’s horns as are a distressingly large number of other folk. I have a feeling that the car is out of it’s comfort zone too as it throws a flat tyre into the mix that I don’t notice until we pull into the NIA car park. Hopefully it’s only just gone flat.

I could do with a drink, a pint of overpriced cheap lager perhaps, but in a nod to the times the venue is full of fast food joints and merchandise stalls selling t-shirts for £30 and programmes a snip at only a tenner less. There are hardly any bars which means long queues at the ones they do have, so we don’t bother. Oh, and I have a seat. Welcome to the world of Arena concerts, this is not my usual environment.

Oh, and the support act is a DJ. Hmmm. Really? Apparently Belfast got The Adventures, who are admittedly from Belfast but I'd have contributed towards their air fare.

Anyway, I best stop whinging about the place because the girls are good tonight. They’re in good voice, well choreographed and with a very able four piece band backing them with no obvious signs of any backing tapes. The music, well, dubious but popular Stock, Aitken and Waterman era stuff aside, that is good too. 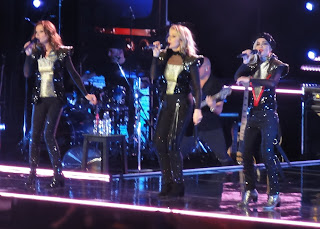 Openers ‘Nathan Jones’ and ‘Robert De Niro's Waiting’ are excellent but probably chucked in too soon, ‘Cruel Summer’ also comes very early, as the pacing does go a little bit awry mid-set with material that many are unfamiliar with.

Some of these are their best songs though because ‘Rough Justice’, ‘Trick of the Night’ and their one and only ballad ‘Cheers Then’ are terrific songs, and very well done tonight. Everyone sits down for the latter, so that is why we have seats because us old folk need a mid-set siesta.

In what is a fairly daring set list they also play their début single ‘Aie a Mwana’ sung entirely in Swahili which must have took some practicing. For me the earlier stuff is indeed the best, so it’s a little annoying hearing ‘Shy Boy’ truncated and merged with the lesser known ‘Boy Trouble’ but fellow ‘Deep Sea Skiving’ tracks ‘Really Saying Something’ and the closing ‘Na Na Hey Hey Kiss Him Goodbye’ hit the spot. 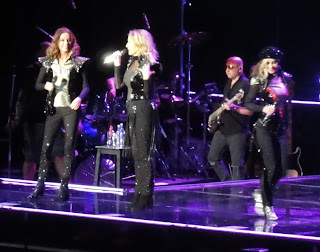 They chuck in a cover of Shakespeare's Sister’s ‘Stay’ which is interesting with Sara and Keren becoming Marcella Detroit and (I think) they play only one track from the post-1988 post-Siobhan era, ‘Preacher Man’ which Keren, or was it Sara?, said it was one of their favourites.

There is also the bizarrely brilliant sight of seeing them dance in time with their younger selves up on the big screen on ‘I Heard a Rumour’.

The encore opens with the Fun Boy Three’s ‘It Ain't What You Do’ which they now seem to have claimed as their own. Personally I’d have got the guys to re-record their bits or take clips from the original video so they could have been ‘there’ but what do I know.

Overall though, it’s great entertainment for us and for the girls themselves, who seem to be having a whale of a time. Then it’s gig over, tyre fixed and the M42 closed. What? There’s always something.