We nearly did Long Eaton parkrun this morning but L proclaimed herself not quite ready to return to running yet. So we stayed in bed instead, which is always a bonus.

Then I take the dogs on the park before heading to the opticians where I get to see the head contact lens chap. It’s about time, its only took four years. Apparently the practice has been leaderless for a while and its only recently that he moved up from Cambridge to take over. Hopefully he can do something with my appalling eyesight.

Afterwards I go to meet L in Debenhams, where she is having another non-shopping trip. She really does fail womankind badly on that score. I join her in their café and steal her free coffee as she waits for her watch to be repaired.

Derby play at 5:30pm today, who knew. I was settling down to listen to the game at 3pm only to find its been moved for TV. Not that 5:30pm is much good to me as we’re at the cinema.


'Film Stars Don't Die in Liverpool' is the story of the final days of Hollywood actress Gloria Grahame (Annette Bening) and also her relationship with Peter Turner (Jamie Bell), a young Liverpudlian actor half her age whom she met in the late 1970’s when they, incredibly, shared the same north London boarding house.

By this point, Oscar winner Grahame’s time in the limelight had seriously faded but she continued to work where she could and spent a lot of time performing on the stage in the UK. Turner and the hugely insecure Grahame, keen herself to feel young again, quickly became lovers. For a while at least, then she seemed to forget about him. 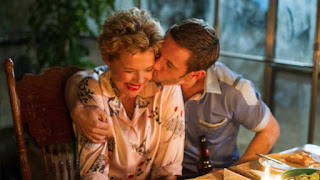 Until 1981 that is when, already ill, she collapsed one night and called him of the blue. She asked if she could stay over with him and his family in Liverpool. Where she hoped to spend time recuperating but, as it turns out, these were to be her final days. 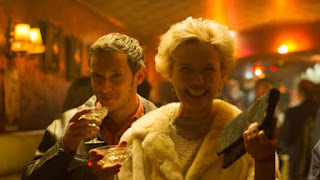 Despite being exasperated that she won’t seek treatment, Turner along with his mother (Julie Walters) and father (Kenneth Cranham), looks after her. The film details his memories as he looks back on their brief transatlantic romance. 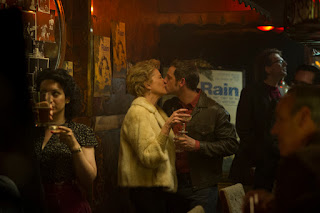 It does rather morosely becomes one long death scene but it is rather refreshing that her final decline happens outside of the public glare. This was a time when famous people could blend into every day life and not be recognised. It was a time before not only YouTube but before even DVDs. In fact VHS had only just been invented.

When the landlord of Turner's local pub does recognise his superstar girlfriend, it is a one off and nobody alerts the world via the yet to be invented Twitter. 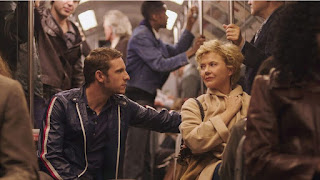 Finally her son, having been told about her illness, travels over to take her back home where she dies just a few hours after arriving in America aged just 57.

It's an excellent film for many reasons. Its story, its message, its time, its acting. Bening is brilliant and ably supported by Bell, with whom she shows great chemistry. There is also strong performances from his Cranham, Walters and Stephen Graham as Turner's brother.