On Saturday morning we head to Forest Rec parkrun. Such is life that I have planned the trains for our trip to Manchester around parkrun. I run with MD, badly. Daughter walks Doggo because she’s injured. L tailwalks but then gets spotted breaking into a run (several times) when she’s supposed to be walking.

Then we head off for our chilled and romantic Mancunian weekend with loads of beer, food, cycling and other indispensable excesses. Daughter has kindly offered to dog sit. After the slow train to Manchester we check in to the Holiday Inn on Oxford Road where we are on a freebie ‘rewards’ weekend which to my surprise also includes breakfast. So we will not be breakfasting at the local Subway, which we can see from our bedroom window and which, of course, is Daughter’s former workplace.

We have tickets for the Track Cycling World Cup this evening which starts at 6.30pm. So time for a beer or two. We find a place called The Knott where the Fell Milk Stout at 5.2% appeals to both of us. We wash it down (or should that be the other way around) with one of their pizzas.

After making our way out to the cycling, watching some great action, we then return to the same Castlefields area of Manchester to The Briton's Protection, a Grade II listed pub dating from 1806. It is ok but not as good as The Knott. So we return there, only to find that one Milk Stout has been replaced by another with Black Jack Milk Stout now on the bar. Clearly the Knott is the place for Milk Stout.

We are also at the Velodrome for the Sunday afternoon session from 3pm but L insists on showing me the local Waterstones first. Although this still leaves us time for a lunchtime pint in Café Beermoth. Then when the cycling finishes at 6pm we get the train home. 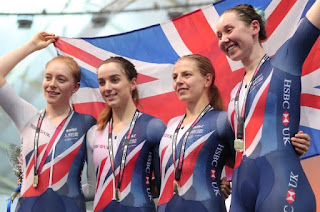 Great Britain finished the event in second place on the medal table with three gold medals, which was good but only as good Kristina Vogel who managed three on her own as the German team won overall with four.