I Guess This Is What You Call Moral Boosting

It’s an early start today for the Dambuster Duathlon which is held at Rutland Water. The event doubles up (or should that be triples up) as a 2014 ITU Worlds Qualifier and a 2015 ETU European Qualifier meaning that I’m seriously out of my depth here.

L and the dogs are dragged out of bed early as well to come, support, administer last rights etc. Which is much appreciated although L spends a fair amount of time eyeing up all the other WAGS outfits. Having already requested a new WAG dress for the Outlaw Half she’s now added a new pair of boots to the required kit. At this rate the supporters’ kit is going to cost me more than the actual competing kit. The boots are considerably more expensive than the aero-bars I’ve been looking at.

There are 700 entrants arranged in three starts. The male elite at 8.20, the aging male veterans (including myself) at 8.30, the fully aged oak smoked and matured in whisky casks male veterans at 8.40 and all the ladies at 8.50. This means I’m going to have two seriously focused groups chasing me down.

I manage to hold them all off during the initial 10k run and more importantly also hold my calves together. Although that took some concentration as I try to keep my foot flat and not run on my toes. I run 47 minutes for the 10k whilst looking for something under 50, although I didn’t actually have much choice about my pacing. The path is so narrow and the field so tightly packed that you simply have to go with the flow as overtaking or being overtaken isn’t really an option.

The run is an out and back along the edge of the dam and the water itself has huge waves on it. So everybody is relieved that it’s not a full triathlon but I doubt anyone is quite as relieved as I am. The water still has quite an effect on the event though with quite a fierce wind always present coming off the water for the run.

The aged veterans do come past me en bloc on the bike leg, the first 15k of which is a painful blur on tired legs and mainly into a strong headwind. Once the oldies had disappeared into the distance, a few of the women start to come past me although not in great numbers. Each one seemed to be sporting pigtails, which is clearly the way to go for a faster time this year, blow the training. Not sure they'd suit me though.

By now I’d got the use of my legs back and I start to enjoy trying to chase the girlies down the road, naturally failing miserably each time and anyway it would have counted as illegal drafting had I actually caught one of them.

Surprisingly enough I’m also overtaking some of the young whippersnappers from the first group, the not-so-elite of the elite group. So all very satisfying and I’m disappointed when the bike section ends.

Back in transition and into the final 5k run, where I develop a short of shuffling routine around the course. All that was needed was the zimmer frame to complete the look. Oddly once I complete the event in an inspiring 2:45 having been aiming for anything less than 3 hours I found out that the pace of my second run was faster than the first one. Would you credit it. I guess this is what you call moral boosting.


My WAG is kind enough to drive me home and then I’m quickly out again as Derby have unhelpfully scheduled a match for this afternoon, which they helpfully lose. Thanks for that, worth rushing back for.

Then L comes across to Derby and after a drink in the Old Bell we got to Quad for a film.

As the Book Thief is a film that is narrated by Death himself (Roger Allam) you’d expect this to be a depressing sort of affair, particularly as it looks at the Second World War, genocide and all, from the German peoples own angle and specifically one young girl but oddly it isn’t. If that was its target, it missed it by a mile.

That young girl is Liesel Meminger (Sophie Nélisse) who is abandoned by her communist mother and subsequently adopted by the Hubermanns, Hans (Geoffrey Rush) and Rosa (Emily Watson). Her brother was supposed to join her but died before he got the chance. 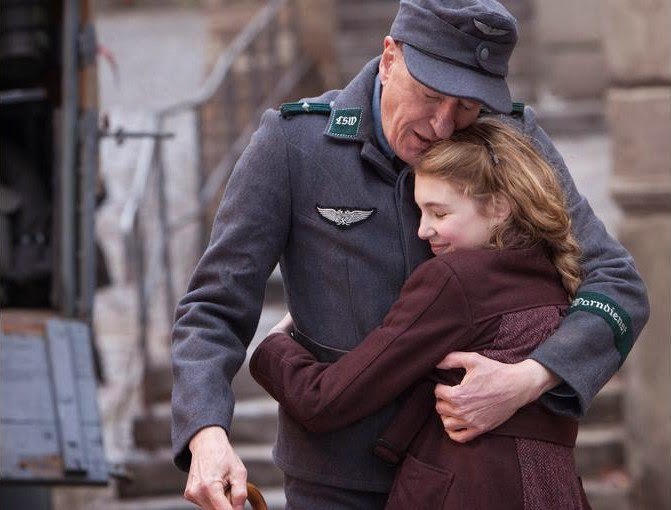 Liesel cannot read and Hans starts to teach her, using the basement walls as a blackboard. Hans has refused to join the Nazi Party and his business suffers because of his stance, so he has plenty of time on his hands. From this Liesel develops a love of books, which is sort of difficult with the Nazis burning so many of them.

The only book she has, The Grave Digger's Handbook, came from her brother's funeral. She steals another from a Nazi book-burning ceremony and a woman who Rosa does the laundry for, Ilsa Hermann (Barbara Auer), invites her to see the vast library she has at home where she nicks another. This lasts until her visits are terminated by Ilsa's husband . 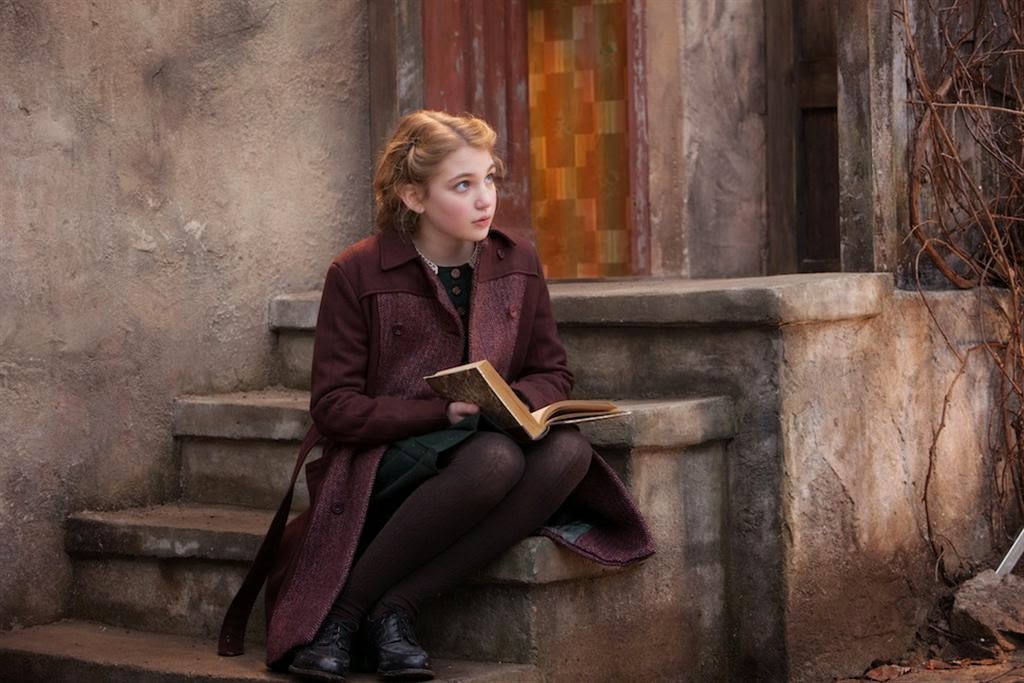 As well as exploring her relationship with books and her new parents, the film delves into her friendship with a schoolmate Rudy Steiner (Nico Liersch). Rudy thinks he's in love with her, almost as much as he is in love with the black US athlete Jesse Owens, a devotion for which he is roundly mocked at school. 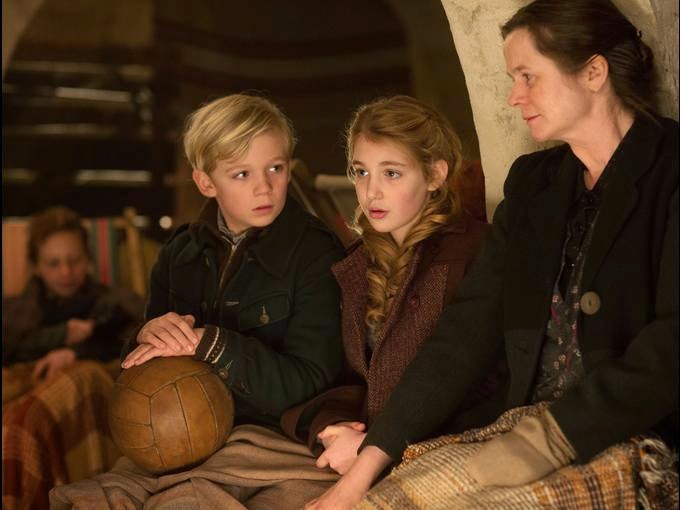 Then there is Max (Ben Schnetzer), a Jewish friend of the family who is allowed to hide out in their basement, to whom Liesel reads to while he lies ill. 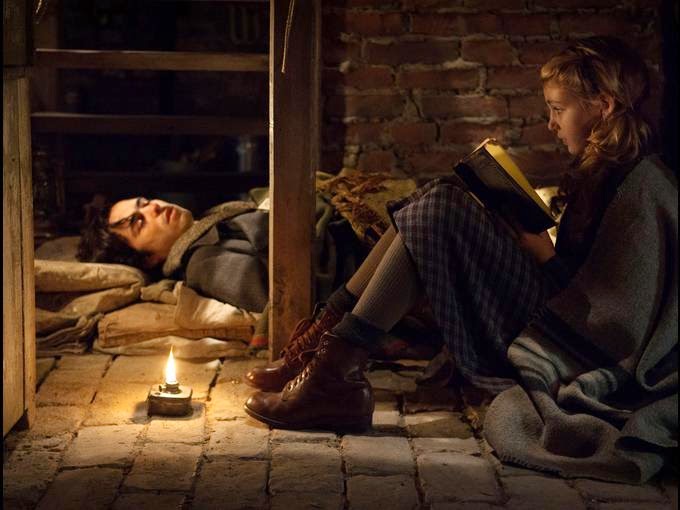 The story is all over the place, totally unfocused and deftly sidesteps around any topic that might have proved harrowing or exciting even. As a consequence the film lacks any real sense of tension or danger. People even die as nicely as possible and without a mark on their bodies, even if their house has collapsed on top of them.

Then there's the way the whole cast speaks in English but with pseudo German accents, throwing in the odd actual German word to hilarious effect. Make your mind up, either do it fully in English or in German with subtitles.

It is a good film ja? Nein. Sadly average.

Post film we visit Mr Gundys, the Greyhound and the Golden Eagle. The Golden Eagle is the pick of the bunch for me, almost empty but now owned by the Titan Brewey, a new one on me.