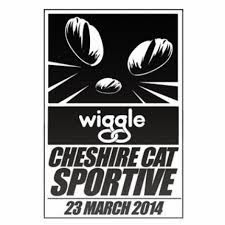 Back in 2010 L and I did the Cheshire Cat sportive which starts and finishes at Crewe Alexandra FC. Today, four years on, we return. I need it as training for my half-arsed Ironman and L, well she simply wants to spend more time as a cyclist. It’s going to be a long one, I’m doing 75 miles and L 40, so we leave the boys at home.

We’re both been allocated at 10am start time, which is in the last group, but we manage to get away by 9.45.

My route heads out towards Leek via the infamous climb of Mow Cop before the route turns left, skirts the Peak District and heads not quite to Macclesfield before looping back to Crewe via Holmes Chapel and Nantwich. L’s shorter route avoids the big climbs like Mow Cop by leaving us somewhere around Congleton before rejoining our route at Holmes Chapel.

There are some serious climbs in the first half of my route. Mow Cop is just one of them but probably the most fearsome and you get a medal if you make it up the 1 in 4 climb without putting a foot down. I didn’t quite manage it. It was looking good until I ran out of road as I zigzagged up and clipped the kerb, which toppled me over. I find out later that they hadn’t penalised me for this and I could have had a medal, if I’d joined the 100 person long queue at the finish...

A bigger disappointment though was when I rode into the first feed station at Tittesworth Reservoir after 31 hard miles to find that they had no food left. All they could offer was a strictly rationed two gels each, which I took although I’d already got a pocket full of them.

The second half of the ride was much flatter and great fun too. At the second feed at Holmes Chapel they did have some food left, if you count little angel cakes. These were disappearing fast as everyone grabbed half a dozen. There was a rumour going around that they’d had bananas once but they were long gone. Even that wouldn’t have been great, I’ve got used to doing sportives where you get the likes of sandwiches, cakes, flapjacks, sausage rolls, cold pizza slices, hot soup, hot tea etc

Pulling out of there I have 17 miles to go, or rather 20 because they seem to have mis-measured. At the finish, where L is waiting, there’s the aforementioned long queue for medals and not even a cup of hot tea as a reward. The goodie bag is half decent though. Yet, disgusted at being half starved to death, I opt to head elsewhere to spend money on food.

We then head home and spend the evening in with the dogs, ordering our second take away in three days. Tut tut.