Today I head over nice and early to the venue of our dog club’s winter show to meet the guy who has offered to computerise it. We huddle together in a corner and whisper our plans so that the chap who’s running the show today doesn’t overhear us. He had offered to do the same thing but his terms and conditions were not accepted. All goes well and we should be good to go for our event in three weeks’ time.

When we’re done I take the boys for an amble on the soggy overflow parking field which I hope won’t be required. I count the cars in the main car park. 85 in all, that won’t be enough.

L is brushing up her fitness doing her usual Parkrun and Pilates as I head home and end up listening to Mo Farah whinging about his own lack of fitness. He’s not happy but then who is? He sounds so like L. He was clearly getting his excuses in first as went on to only finish second in the Edinburgh Cross Country.

Then I listen to the FA Cup where Derby Reserves scrape though to the fourth round with a narrow win over Hartlepool. Then to Broadway.

Set in Copenhagen in the mid-1920s, The Danish Girl is based on the true story of the first person to undergo gender reassignment surgery.

Einar and Gerda Wegener are a seemingly normal couple who are both painters but while Einar (Eddie Redmayne) is a renowned landscape artist, Gerda (Alicia Vikander) is struggling to make an impact with her portraits. On the surface they appear happily married and are trying for a baby. Something which shouldn’t pose too much of a problem as they seem to be jumping each other at every opportunity. 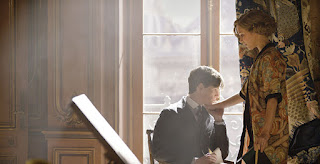 When one day Gerda is struggling to hit a deadline and needs a female model but one isn’t available, she asks Einar to put a dress on and stand in. When he does, they both seem to like it. From that point onwards Gerda encourages him to dress up in her clothes and wear her makeup. She seems to see it as a sort of a kinky dressing up game and indeed, at first, most of the time it ends up with them in bed. When she catches him secretly wearing her lingerie under his clothes, she likes that too and again they end up having sex. 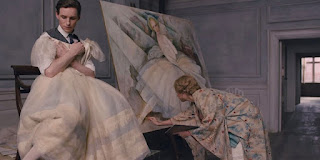 They start going out in public with him dressed up as a woman, now known as ‘Lili’ and no one suspects that it is really Einar. I don’t know how well the real Lili passed for a woman but Redmayne's Lili was far from convincing, undeniably a man in a wig and the only person he/she gets a reaction from is a gay man (Ben Whishaw) who he inadvertently pulls. Which doesn’t go down too well with his wife.

Gradually it becomes clear that Einar isn’t so much keen to get his wife out of her underwear but to get into it himself as he becomes more and more obsessed about what it would be like to be a woman. I find it hard to believe this is how you discover that you are transgender as I thought it was something you grappled with almost from childhood but what do I know. Perhaps he did but the film doesn’t tell us. 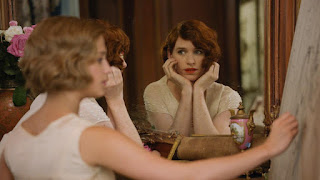 They seek help for Einar but the doctors either prescribe shock treatment or want to lock him up. Eventually they find a more open minded doctor who suggests that Einar become part of his experiments into gender reassignment. This leads Einar to submit to a succession of untried medical procedures which will eventually kill him.

This may have started out as a film about a transgender man but where the film actually excels is in its telling of the story of a woman who is married to someone who isn’t who she thought they were.

Saint Gerda takes everything that is thrown at her in her stride and that is some achievement. Gerda is not the successful artist in the family and it is only when she starts painting portraits of ‘Lili’ that she finally starts to get noticed as an artist. This perhaps goes some way to making up for gradually losing her husband. 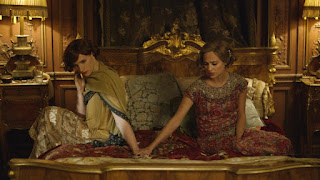 When Einar decides he wants to become Lili she just goes with it even though her own needs are often compromised along the way. At times it’s painful to watch as he thoughtlessly withdraws himself from her until eventually he leaves her totally alone. Yet Gerda’s devotion to her marriage and to her husband is unflinching even when Einar’s childhood friend, Hans (Matthias Schoenaerts), expresses a clear interest in the sexually frustrated wife. Come the sad ending, she is still there by his bedside.

This is Gerda’s film or more precisely its Alicia Vikander film. While Eddie Redmayne seemed somewhat overwhelmed by his role, which seemed to consume him and then spit him out the other side, Alicia Vikander totally owned her role. I suppose it didn’t help that I kept looking at Redmayne and seeing Stephen Hawking in drag, which isn’t a great vision, but there’s no getting away from the fact that Vikander is fantastic here. 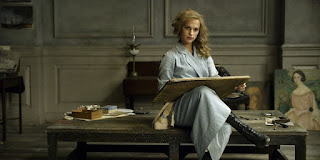 Of course in real life Gerda was herself bisexual and painted lesbian erotica but this wasn’t mentioned in the film. Not sure what the Academy Awards committee would have made of that.


We pop into Brew Dog, which seems to get duller every time we go. We end up having a couple in the Peacock. Well I do. L only has one as she dozes off in a crafty tactical move to reduce her units ahead of tomorrow’s training run. I think she’s trying to manoeuvre me.