This morning we get up early and drive over to Cheshire for the Four Villages Half Marathon. We head off through the overnight snow which has left a thin covering down our street. The organisers, Helsby Running Club, have repeatedly assured us that the race will go ahead claiming this year that full road closures and a gritter on standby will ensure this happens. Two out of the last three editions have been iced off including the only time we have entered in 2013.

We have our doubts on the drive as there is fresh snow everywhere you look except oddly once we cross the border in to Cheshire. Helsby itself appears completely snow free.

We have arrived super early to avoid being sent to the park and ride carpark a few miles away. We have dogs with us and want to get them close. We were prepared to park on the streets nearby but in the end we are early enough to get on the club house car park and almost front row. So the boys will have a great view of the start.

The race itself is all on lovely lovely tarmac and takes in the four villages of Dunham on the Hill, Mouldsworth, Manley and of course Helsby. Hence the name Four Villages. It is an undulating route but there are no massive hills to speak of. Obviously it is cold so I go for full leg and arm cover as well as gloves.

The race goes well, no injuries flare up and I get a decent pace on. Soon I’m at 10 miles where there is not only a timing clock and some chaps shouting ‘just a parkrun to go’ but also the prospect of it being almost downhill all the way to the finish. Yes, really. For once those marshals did not lie.

It has to be said the whole event runs like clockwork and I do a good time as well. My 1:44 is as good as at Derby in October, a bit short of Leicester but this is after all the first race of the season.

L also runs well, surprising herself. She even buys a souvenir t-shirt as one isn't included here. I still wear mine proudly from the cancelled race three years ago. We grab a bacon sandwich and crack open our flash of coffee to celebrate before heading back home.

We do food and film at Broadway later.

Based on a novel by Emma Donoghue, who also wrote the screenplay, Lenny Abrahamson's ‘Room’ is actually a garden shed. There are no windows and the only door has an electronic code on it. This is home to Joy (Brie Larson) and has been home for the ast seven years after the man we know only as Old Nick (Sean Bridgers) abducted her when she was just seventeen.

There is little back story here so we assume her abductor is just keeping her for sex which he visits her for whenever the fancy takes him. The film isn’t based on any specific incident but clearly there are similarities with several real life abductions. For the last five years ‘Room’ has also been home to Jack (Jacob Tremblay), Joy’s son, a product of her situation and possibly the only thing that keeps her sane. 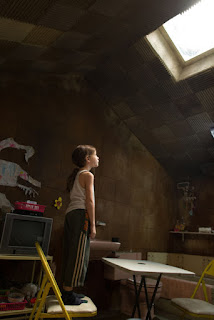 Their captor holds total power over their lives, if they cross him then they’ll be no electricity, heat or food provided. When he visits Jack has to hide in the wardrobe as Joy repays him for his generosity.

The two of them live by a routine, endless days of cooking, reading, attempting to exercise and watching TV where Jack believes everything he sees is pure fantasy. It's tempting to say he's not far wrong there. Joy has kept Jack from realizing the horror of their situation but as she becomes more desperate to escape and hatches a rescue plan, she has to re-educate him to prepare him for the fact that there’s actually a whole world outside the door. 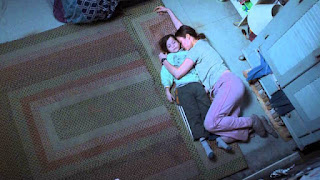 Joy fakes Jack's death and persuades Nick to bury the alleged corpse. Jack escapes, discovers the outside world, alerts the police and gets them rescued, all at the age of five. This bit is the most improbable of many improbables contained within the script. 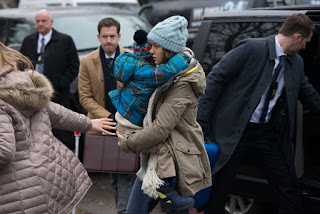 Outside things have moved on and a seven year chunk of Joy’s life is missing. Joy's parents have divorced, her school friends have moved on and her promising athletics career is history. While her father (William H. Macy) harshly judges her, her mother (Joan Allen) is supportive but they soon slip into typical Mother-Daughter quarrels and the media almost destroy her. 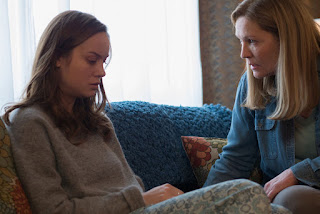 The concept of the film is a good one but the script is sadly lacking particularly in regards to their highly questionable escape plan and subsequent rescue. The film also focuses more on their adjustment to life outside of their room rather than the imprisonment itself which is perhaps a shame. However 'Room' is saved by some strong performances from Larson and particularly from Tremblay, who is absolutely brilliant especially for someone so young.


We finish the night with one in Lord Roberts.