We have a dog show today near Newark but our first run isn’t until around lunchtime so I let L talk me into running the Newark parkrun first. I had only intend to ‘support’ as it looked a bit muddy to me and that’s not my sort of thing but I coped ok in the end. This was L’s 50th parkrun so celebrations all round for that. MD had to support of course as he’s competing later.

When we get to the dog show it is parking chaos, which is somewhat worrying as my club are using this very same venue next week. We will have to do better with the parking.

MD’s first run is a bit of disaster when he misses a contact point and I am asked to leave the ring for manhandling my dog. I was gentle honest. Our other three runs are not much better, we miss two lots of weave entries and have several poles down. It’s early in the season, that’s my excuse.

Later we head to Broadway for food and a film.
The definition of a 'Revenant' is a person who returns. So now I’ve spoilt the plot for you.

'The Revenant' is a western style ‘epic’ inspired by the exploits of frontiersman Hugh Glass (Leonardo DiCaprio) engaged in fur-trapping in the wilderness of the northern Louisiana Purchase in 1823. It is directed by Alejandro González Iñárritu brought us 'Birdman', enough said.

Glass's party are repeatedly attacked by the local natives who decimate their numbers. Having to abandon their boat, they end up journeying back to their camp at Fort Kiowa on foot. 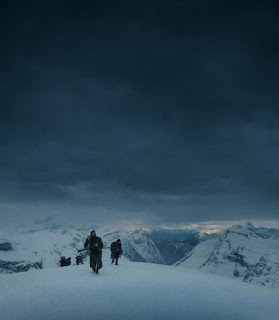 While out scouting, Glass is attacked by a grizzly bear after disturbing her cubs or perhaps she thought he was after her fur. The attack is brutal and leaves him seemingly mortally wounded. Taking into account his injuries and the fact that this is the middle of winter and the temperature is well into the negatives, his crew assume he’ll be dead within hours. However Glass is so highly respected that his boss Captain Henry (Domhnall Gleeson) pays for the mumbling mercenary John Fitzgerald (Tom Hardy) to stay with him until he dies to give him a proper burial. Along with him are Glass’s half-Pawnee son Hawk(Forrest Goodluck) and his friend Bridger (Will Poulter).

Fitzgerald is not happy when Glass does not die quickly and tries to hasten the process but Hawk catches him. In the ensuing fight he kills Hawk as Glass watches on. In the end Fitzgerald abandons Glass in a shallow grave, still alive and now determined to avenge the death of his son. At which point Glass crawls out of his grave and heads for home... 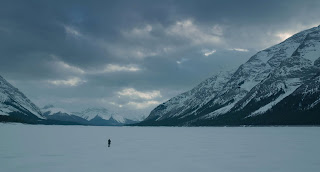 In real life Glass really did survive being mauled by the bear but I think his story has perhaps been passed down and repeatedly re-embroidered over far too many glasses of wine over the years. From here on in his journey to exact revenge becomes more absurd with each scene.

Glass takes a trip down the river and is swept over the rapids. This would have drowned most man, let alone someone who has just been savaged by a bear. Not Glass though, as for the hypothermia that would surely have followed this dunking. Nope, not Glass. 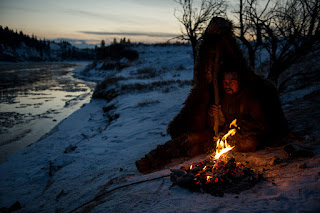 He is then attacked by another bunch of natives and gets shot before he and his horse plunge over a cliff to what is surely certain death this time? Nope. Well the horse didn’t survive it, which is fortunate for Glass who has the strength to gut the dead animal and sleep inside it. Ewwww. 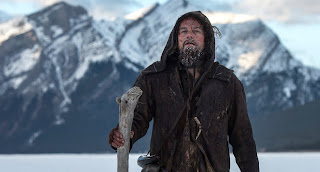 Eventually our Revenant hero returns to camp and Fitzgerald, who has already made it back, legs it with the contents of the camp safe. Incomprehensively just two guys go after him but this ably sets up the revenge finale.

I suppose the Revenant is not supposed to be a film in the normal sense, it is an ‘experience’ and an impressively bleak one at that. It is also an extreme case of style over substance. It has a great cast, stunning locations, amazing cinematography and the ‘how the hell did they film that’ factor but also practically zero character development together with a ridiculous plot.

In theory all of the good points above should have been able to deliver a great film which could all have been done and dusted in a lot less than two and a half hours but I think this is minimum running time for an Oscar nominee.

If DiCaprio gets an award for his two and a half hours of crawling and grimacing then it will probably be because they feel they owe him one. We already know he’s excellent at crawling and grimacing from The Wolf of Wall Street. Also if he wants the gong that much to put himself through all this, then for God's sake just give the man his Oscar and let's all move on. I’m assuming he didn’t use a stunt double because if he did he’d hardly have ever been on set and that man should get the award instead.


Time for a few pints of Buttermuch at the Borlase me thinks.