A Man With A Van

The four of us. That’s L, myself and the boys head up to Manchester this morning to move Daughter home. She has moved several times in the past and the first time we moved her stuff a wheelbarrow would almost have been sufficient, the second time it required a car, then several cars, then a small van and this time a large van. Presumably next time we’ll require a HGV.

We meet our man with a van, my old pal from school, around 12 noon. We fill the car and almost fill the van. So, yes, I do need to start looking at HGV prices for next time.

Other than that, things go well. Her landlord comes round and doesn’t spot the subtle damage in the bathroom but he probably will later, after we’ve legged it.

Once back in Nottingham the problem is storing the stuff as she’s not ready to move into her new place yet. It’s amazing how inventive you can be.

Tonight an AF night preparing for the Coventry Half Marathon with the film ‘Elle’ at Broadway.

The film opens with a violent rape. The victim of which is Michèle (Isabelle Huppert), the co-owner of a video game company which seem to specialize in particularly violent video games and she gets an unwanted dose of her own genre. Her assailant is dressed all in black and wearing a mask. After doing the deed, he is quickly gone. 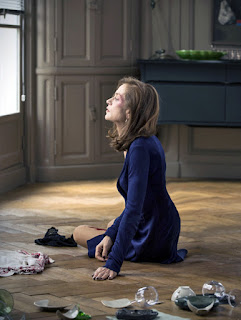 After a few moments, Michèle gets up, blames the cat and then cleans up the crime scene before getting in the bath with a glass of wine in her hand. She doesn't call the police but instead orders a takeaway. It isn't until much later, when she is out with a group of friends that she tells anyone.

It's safe to say, that this isn't your typical film about rape. The film asks you to figure out Michèle and while you’re at it, her oddball collection of friends, relatives and work colleagues.

These include her ex-husband Richard (Charles Berling), whom she still seems to fancy although he is now seeing a young student of whom Michèle is very jealous. Then there’s her mother Irène (Judith Magre) who has hired a gigolo called Ralph and her son Vincent (Jonas Bloquet) who is moving into a new apartment, that Michèle is expected to pay for, with his domineering girlfriend Josie (Alice Isaaz). Josie is pregnant by another man but Vincent claims it is his, even after it is born and is of mixed race. 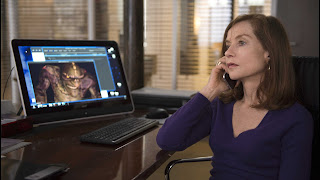 Oh, and her father is a convicted serial killer, which caused her to have a somewhat difficult childhood and this is given as the reason she doesn’t trust the police as well as perhaps an explanation for her chosen profession in violent video games. It could also explain why she is fantasizing about a return visit from her attacker who has been sending her text messages.

She does at least change the locks and arm herself with pepper spray before getting back to work on the latest release from her company. Where she finds that one of her employees has made her a feature of the new game. She incorrectly links this to her attack and gets another employer to investigate his colleagues as well as getting him to drop his trousers to rule him out as a suspect. 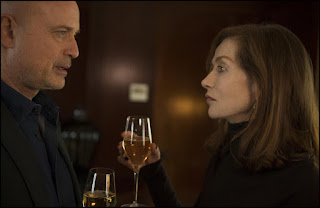 Meanwhile Michèle is having an affair with her best friend and business partner Anna’s (Anne Consigny) husband Robert (Christian Berkel) but who she really has the hots for is her neighbour Patrick (Laurent Lafitte), whom she watches through binoculars with her hand down her knickers pleasuring herself. 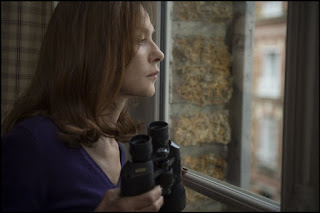 She’s a bit mixed up perhaps and when the identity of the rapist is revealed it gives this cocktail another stir. Is it all a consensual S&M relationship? Whatever, she still seems to want revenge on her assailant for igniting such traits in her.

Director Paul Verhoeven has created a dark satire on relationships and I rather liked it. There is plenty here to get you thinking, if you can see through the un-PC-ness of it all. It's rumoured that no major American actress would take on the role of Michèle, which was good news of course because Isabelle Huppert is terrific and well backed by her supporting cast.