So we take a lunch time flight out of Birmingham to Geneva. The only problems being the car park that I have booked is about half an hour away, but that still works ok, and some eye watering ski carriage charges on Easyjet.

The first task on arrival in Geneva is to find France, as in the French side of the airport which is basically a badly signposted broom cupboard up two flights of escalators. This is to get a French plated car for driving into France where they are now heavily taxing Swiss cars because they are non-EU, a taste of what’s to come post-Brexit I suppose.

Then of course we have to downgrade our upgrade because the car hire companies always upgrade you whether you want to be upgraded or not. They are offering us a Nissan X-Trail which is practically a coach, when I turn this down they give us a Nissan Juke. Which personally I think is still too big but I don’t think they make anything smaller these days.

Then we have to queue to get out of France and into Switzerland before queuing to get back into France from Switzerland. Border controls you see, a taste of what’s to come post-Brexit I suppose. The French side of Geneva airport ought to build a flyover over Switzerland to avoid this problem.

It isn't long before the Nissan Juke develops behavioural issues and an irritating phobia about white lines. Every time I cross one without using the indicators it cries in pain with an annoying ‘bleep’. This makes driving up the switchbacks that are immensely common on mountain roads far more challenging than it should have been.

Do you remember the day when cars were just cars and you just drove them? Seems a long time ago now.

Eventually we arrive and book in to Chalet Stella, although mine host does not look much like a Stella but he’s a nice enough chap. Having checked out our room, we head out to explore Les Gets and to also see if we can get our lift passes sorted tonight. 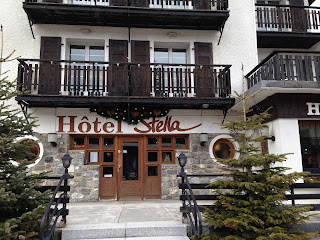 We do get the passes, from a vending machine which after taking our money only give us one pass rather than two because we fail to remove the first one from the dispenser in time and the second one gets stuck behind it. The dilemma is now what to do, one can hardly leaving a plastic card valued at around £100 unguarded but nor can we sit here until morning.

I was just starting to consider trying to flush it out by buying another cheaper pass, but at more cost, when it pops out of it’s own accord. Relief.

Now we are just about sorted because tomorrow we have a ski lesson. Yes, a lesson. L wanted one so that she can learn how to keep up with me. Plainly my advice to simply ski faster hasn’t been taken on board. So I have booked her a three hour private lesson on our first morning and I will tag along. This will be the first time I have looked a ski instructor in the eye in thirty three years.

Such profligacy on passes, lessons etc means we may have to live on bread and water all weekend. Fortunately this year we’re not in Switzerland, although it is only a stone throw away, so things aren’t quite so expensive. So it’s more a case of cheap French plonk, strong French coffee, crusty bread and maybe the odd sliver of cheese.

The 'odd sliver of cheese' bit goes out of the window on day one in a restaurant known as Le Var No. We both go wildly off-piste with our menu choices and L’s turns out to be 80% cheese and mine 90’s cheese. Then the following night in La Taniere the soup of the day comes not with a bread roll on the side but a chunk of cheese. Cholesterol heaven. 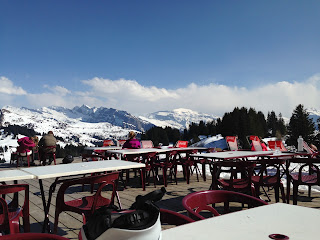 Anyhow back to the skiing and as I mentioned we have a lesson. As we await our instructor, who will be decked out in all green, two such characters appear from a nearby hut. A hunky man and a blonde ponytailed woman. Obviously the hunky man is ours.

He seems a likeable chap until he sees me ski. Apparently nobody has skied like that since the 1980’s which incidentally, he practically points out, is also the decade that my boots hail from and my skis aren’t much newer. Yes, I know but they work don’t they? At least he hasn’t started on my clothing, that’s even older and anyhow, didn’t the Futureheads once say skiing was better in the 80’s?

Apparently I have been leaning way too far back for the last thirty years, you are not meant to ski as if you’re lying on the sofa. Why not exactly?

Character assassination apart the lesson goes quite well and I spend the rest of our three day break touching my knee, to get my weight more forward and bend-ze-knees, as they don’t say in France. No more sofa skiing for me. That's so, well 1980's.

L? Oh yes, L. It was her lesson wasn’t it. I think she got something out of it as well. It didn't help that Les Gets and Morzine next to it both had quite straightforward, relatively easy skiing which L could cope with just fine. It was the harder, steeper stuff she needed advice on. Typically, on day three we drive over to the other side of Morzine and get the lift up to Avoriaz and Chatel, where the skiing turns out to be much more evil. You can ski into Switzerland from there, if you brave the ‘Swiss Wall’. 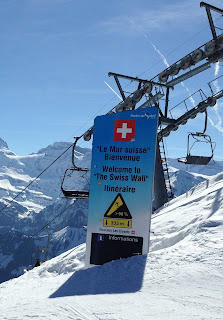 We don't and after a couple of attempts of skiing round it accompanied by some rather evil looks from L, I abort that idea and we stay in France.

One thing I didn’t expect in France was beer. Yes, they have Pelforth Brune and... exactly, that’s it for proper beers but seemingly not in Les Gets. To my beer trail I add the excellent Licorne Black and the almost as good Léman Brune, which we sip in a mountain restaurant above Chatel. Then in Les Gets itself there is an Irish Pub or Le Pub Irlandais, if you prefer. 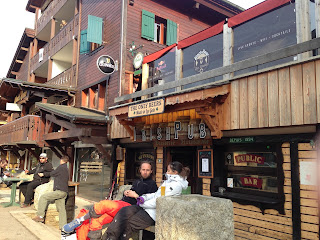 Of course Irish pubs are nothing to get excited about unless, like this one, they brew their own beer. It’s mainly keg stuff but includes a porter but they also do a hand pulled real ale which isn’t too bad at all. 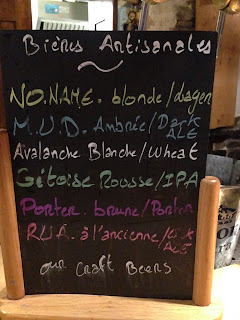 Sadly the holiday is over too soon and at the end of Monday’s skiing we take the annoying car back to Geneva and attempt to find the Holiday Inn for our last night. This is easier said than done but done it is. You think they’d be able to serve us a meal after our ordeal but sadly not. Their catering is provided by a Perch and Chips van that is parked in the car park. We’ll give anything a go.