Some Serious Work To Do

Today I run the Retford Half Marathon which starts at Retford Oaks Academy. L and the boys come along to offer vocal support.

Some folk from Sheffield Running Club described what is to come as pan flat which, as there is nothing anywhere near ‘pan flat’ for them to compare it with in Yorkshire, could mean anything. As it turns out the course is remarkably flat for the first five miles but then becomes quite undulating thereafter with several long but gradual inclines.

The race is well organised, on closed roads, but very low key e.g. somewhat lacking in atmosphere. Outside of Retford itself, it’s a case of spot the spectator and it’s also not hugely scenic, which I don’t mind at all.

As is the way with races early in the year there are not many slow runners so the pace is brisk. I make a good start but after three miles my thighs stiffen up and I gradually get slower and slower. This is where actually doing some training might have helped.

My time of almost 1:49 leaves a lot of room for improvement although, being very early in the season, there is plenty of time for that. If I was to ever get among the awards here I have some serious work to do. First 40+ Male clocked 1:14, first 50+ Male 1:18 and first 60+ Male 1:23. Ouch. So, just half an hour to knock off my time to get first 50+ Male next year. I suppose I did want a challenge for my 50th year.

I also entered the Nottinghamshire Amateur Athletics Association Half Marathon County Championships which was part of the race, and I didn’t win that either.

There is no goody bag, just a bottle of water and an orange t-shirt. It was ominous at registration, that they gave me a pile of leaflets with my race number as this is the sort of tat that usually weighs down the goody bag. T-shirt wise, as orange t-shirts go, it’s not too bad.

If I found the lack of a goody back disappointing then MD found it positively soul destroying. He is so upset at the lack of crisps and/or biscuits that he starts to eat my race number in frustration.

Later L and I have a drink in Lord Roberts before taking a pint of Supreme into tonight’s film which is Moonlight. It’s disappointing to see that there is nothing from the Stout and Porter Trail in either the Roberts or Broadway itself.

Moonlight takes place in Liberty City, Miami and shows three snippets of a young man’s life as he grows up black and gay in what is a  tough neighbourhood. 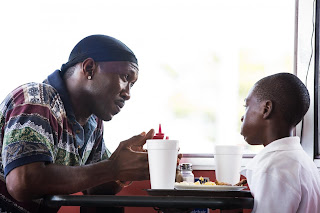 First we meet a young Chiron (Alex Hibbert) nicknamed Little. His lone parent is his crack-addicted mother Paula (Naomie Harris). Basically he is fending for himself and eventually he runs away from home. Typically, it is a crack dealer named Juan (Mahershala Ali) who finds him inside an abandoned house and takes him home to the place he shares with his girlfriend, Theresa (Janelle Monáe). Both Juan and Theresa form a bond with him despite hostility from his mother.

Then we meet Chiron as a teenager (Ashton Sanders), withdrawn and just about coping with his still addicted mother but he is bullied by his peers who regard him as a ‘faggot’ but it isn’t until he hooks up with an old friend, Kevin (Jharrel Jerome), on a beach that he has his first sexual encounter.

In the end though, Chiron cracks under the weight of the bullying when Kevin is put up to attacking him and he smashes a chair over the ringleader Terrel (Patrick Decile), which means he ends up in a juvenile detention centre. 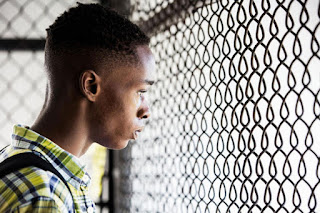 Finally, we see Chiron (Trevante Rhodes) ten years on, now known as Black. He's now a drug dealer himself living in Atlanta and has basically turned in to Juan, showing what a big influence he had on him. Although, Juan himself is no longer alive. Chiron’s mother is now in a home. After getting a phone call from Kevin (André Holland), who is now a cook in Miami, he goes to visit him. Kevin is still his only sexual encounter and he still has feelings for Chiron despite now having a child of his own.

'Moonlight' is one of those films that just drifts along, following a life, but in a mesmerizing way. It's not the sort of film that gives you answers, it just shows you the way things are and lets you draw your own conclusions. A bit of thinker’s film if you like. Ultimately it chronicles how much a part drugs can play in the lives of some people.

The film is full of strong performances from the likes of Mahershala Ali and Naomie Harris as well as others, which is why it has been heavily nominated for awards this year. It also has three actors playing the lead character, as well as for the likes of Kevin, which is a bold move.

Is it the best film of the year as decided by the Academy? Probably not but it's still pretty good.


Afterwards, unlike our earlier watering holes, the Blue Monkey does seem to be embracing the Stout and Porter Trail with three beers to choose from.