The weather has turned very mild and its hot work on the bike this morning. Largely because I have too much kit on.

L meanwhile goes out with not enough kit and forgets her swimming goggles. So, that would have been a breaststroke laden session then. She said she did feel a bit poncy but breaststroke is actually a pretty tough workout.

It’s a rare game of squash tonight and my opponent has been preparing hard with his kale muffin diet. Apparently, this will make his constant colds a thing of the past although probably to be replaced by malnutrition.
Before the game, I jokingly ask if he has picked up this week’s injury yet. It turns out he has and has now pulled a calf muscle. He hobbles around the court but still wins. However, it looks like we’re headed for a few more weeks off.

In our first trip to the Navigation for ages, they have three dark ales on the bar as it’s the Stout and Porter Trail. Quite a mouth-watering selection. 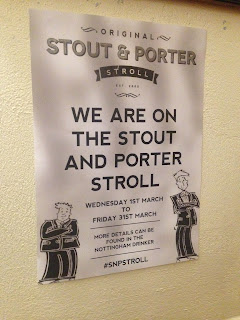