I have a second day in London today which is for a meeting at a different site and where we agree to lots of extra work which will extend the project to mid-2018 at least.

Without me to wake her, L oversleeps. Seems the dog alarm didn’t work either.

My colleagues and I are scheduled on a nice early 13:58 train back from London, so I’m home in plenty of time for Honeyblood.


Honeyblood are a band I’ve wanted to see for ages and who I finally saw last year at the Handmade Festival in Leicester. However that was a very short set cut even shorter due to the whole festival running behind schedule. I’m hopefully for more than just six songs tonight.

First though are Nottingham’s Super Furniture who openly confess that they don’t have any music to sell us but they are very keen for us to buy a t-shirt. They are also back in July. I think the lead singer mentioned that... several times. 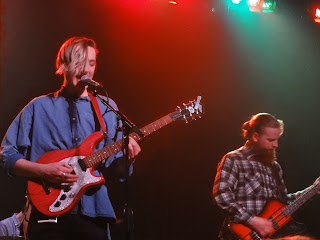 They are a fairly bog standard indie four piece guitar band, pleasant enough but not of the required level to buy the t-shirt.

Honeyblood are still at that nice stage where they set up their own instruments while trying to pretend that they aren’t the band before sneaking off stage to make a grand entrance and everyone’s supposed to go ‘oh, you ARE the band’. Problem is that’s not working any more because they’re becoming too well know. As is shown by the fact that this gig, originally scheduled for the Bodega, got upgraded. 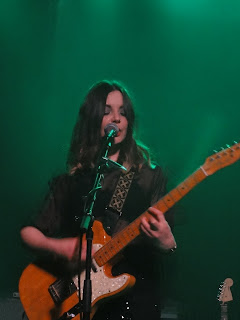 It is their second album ‘Babes Never Die’ that has got them the recognition and it is from that they open with acerbic ‘Justine, Misery Queen’. Understandably it is that album, slightly more polished that their first, that provides the majority of tonight’s set.

However, their first album ‘Honeyblood’ is arguably as good as shown by the more rift-ful ‘Choker’ which is up next and which sets the tone for a night of good noisy fun with the odd
reflective moment thrown in such as on the excellent ‘Cruel’.

The band of Stina Tweeddale on guitar and Cat Myers on drums are one of just many two-piece bands around at the moment. It must be quite a feat for two people to create the sound that is usually associated with a full band but these two manage it and think of the lower overheads that must bring. It makes you wonder why everyone isn't doing it.

There’s also less chance of your band members falling out but then if you do it's probably terminal or perhaps not because, although Honeyblood were formed in Glasgow back in 2012, Myers has only been on board since 2014. 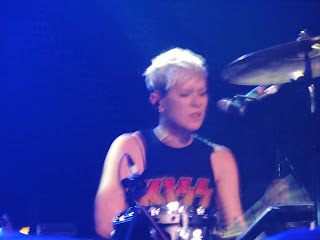 The only misstep is when Stina says ‘Thank you Bristol’ after one track, oops, but after a bout of booing, mainly orchestrated by herself she is forgiven.

After three of their big numbers ‘Sea Hearts’, oldie ‘Killer Bangs’ and album title track ‘Babes Never Die’ end the set we find out that a band who, apparently, didn’t believe in encores now do.

They come back for two more, another oldie ‘Super Rat’ and one of their recent big singles ‘Ready for the Magic’. 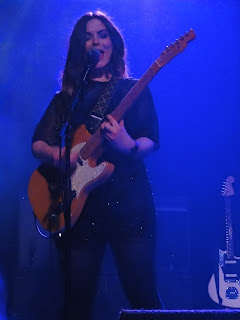 Excellent stuff and, oh, Honeyblood have t-shirts on sale too.