We parkrun at Gedling again this morning and then after a brief breakfast we head home. I have a fencing company coming around to give me a quote for repairing our fence after it got wrecked by next door’s ivy. The housing association that owns next door have tentatively offered to contribute to repairs.

Then it’s up to Beeston to sort out some new carpet for the back bedroom\computer room that L has just finished decorating. Then I take the boys to see my parents.

In the evening, we're at Broadway.

Green Book is based on the real life friendship between a nightclub bouncer from New York, Tony Vallelonga (Viggo Mortensen), and an African-American pianist Don Shirley (Mahershala Ali).

Vallelonga also know as Tony Lip, for his bullshitting expertise, is hired as Shirley’s driver and minder as he goes on tour through the still segregated deep south of America in the early 1960s.

They are armed with the Green Book, a guide to hotels and restaurants hospitable to black people, which means that the employee often gets better accommodation than his boss. The further south they go, the more prejudice they encounter and the more Shirley is viewed as a novelty act rather than the world class musician that he is. Shirley knows all this but he is doing this the tour out of defiance because he wants to confront the racism head on even if he isn’t allowed to use their bathroom. 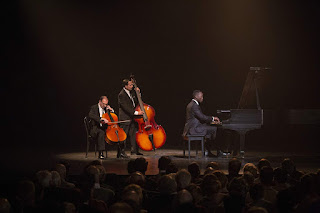 Vallelonga not only has to drive Shirley, ensure that he always gets to play on his cherished Steinway piano, but he also has to protect him from himself. He is prone to act in a very erratic fashion from time to time. Vallelonga has to deal with some thugs in a bar for him and when his sexual escapades with another man land him in jail, he is the one who manages to free him. 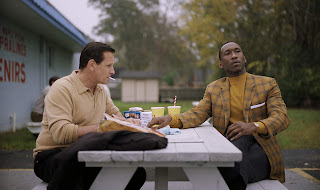 As the two start to bond, you just know that the pair’s better qualities will rub off on each other and that is how it pans out. The more articulate Shirley even dictates letters for Vallelonga to send back to his wife (Linda Cardellini). 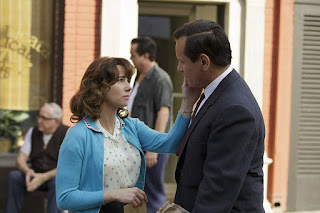 Sadly a lot of the film doesn’t ring true. At the start we see Vallelonga put two glasses in the bin because his wife has let two black workmen drink from them but this level of fanatical racism seems to immediately disappears the moment he meets Shirley. He also appears to be an expert in black culture who introduces his employer to the joys of Aretha Franklin and James Brown. Amazingly Shirley is unaware of them. Oh, and of fried chicken.

It's amiable but lightweight entertainment despite it's heavyweight subject. Generally it is a film more focussed on friendship than civil rights but for saying that we weren't sure if we wanted to see this or not it was a very pleasant surprise. Mahershala Ali and Viggo Mortensen are both excellent and make a very engaging odd couple.

Afterwards we again go in the Hockley Rebel but sadly, after several trips here, there’s still no Stay Puft.