Today I do the Leicestershire Half Marathon which is the rather curious name they have given to a race that starts and finishes at Prestwold Hall. Which is, granted, in Leicestershire but then so are countless other places… 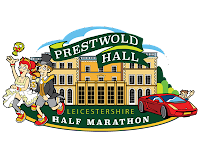 It is organised by RunThrough who specialise in events that make you run through places repeatedly. This one is centred on Prestwold Driving Centre which is right next door to the hall and is just ripe for doing laps of.

It actually turns out better than I expected with the start\finish in front of the hall and even a trip out on to real roads, the only issue there was we had to do a short cross country section to get there. Then we finished off with some inventive looping of the Driving Centre e.g. they didn’t just make us go round. They were quite cunning and made us double back on ourselves and stuff like that.

Anyhow I must have done ok because my time of 01:44:57 can only be bettered in the last twelve month by my Robin Hood time. I even, sort of, enjoyed it. Not so L who seemed to have a traumatic time with the boys. Which makes her take the Lad out on a ‘training’ walk once we get home.


In the evening we are at Broadway where I stumble across Vanilla Gorilla, which wasn’t available at the beer festival last night. We watch 'A Private War' which is the story Marie Colvin (Rosamund Pike), the long time Sunday Times war correspondent of whom I was an occasional avid reader (now there's a contradiction).

Colvin, as with most war correspondents, risked her life to report from the front line but she often went where others feared to tread. Over the years she became a legendary figure who lost an eye to shrapnel in Sri Lanka in 2001 but, once she’d recovered, went back to reporting wearing an eyepatch like a badge of honour. 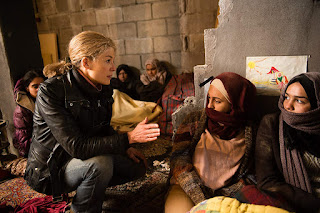 The film covers Colvin’s career up to her death in Homs in 2012 where she was in a building that the Syrian government shelled. At the time she was in Syria to prove that, despite what Assad had said, the government were targeting civilians. She proved it conclusively with her death and still got a live report in to CNN.

The film goes back a decade or more before Homs and keeps us informed of where we are with rather unnecessary nagging on-screen countdowns e.g. London, England, 10 years before Homs.

Having teamed up with photographer Paul Conroy (Jamie Dornan) she travels to Fallujah where they uncover mass graves containing victims of Saddam Hussein’s regime. Then as Colvin continues to be drawn to danger zones, we see her in Afghanistan and then interviewing Muammar Gaddafi in Libya. 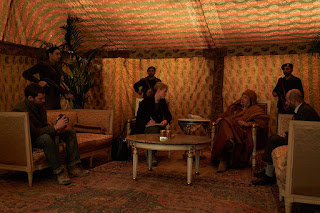 Her editor Sean Ryan (Tom Hollander) constantly fears for her safety and sanity but ultimately he needs her to sell newspapers and, luckily for him, her DNA constantly drove her back to the front line.

Although we do see Colvin in civilian life it is fleeting. She struggles in her relationships (Greg Wise/Stanley Tucci), suffers nightmares, drinks a lot of alcohol, is rarely without a cigarette but she does occasionally pop home to pick up an award. The implication being that her job took a great toll on her but it's not clear if this was the extent of her personal life and it would have been nice to have known more.

Rosamund Pike throws herself into the role and does a good job. The film may be more action movie than I would have liked but I still liked the film a lot. It is pro-journalist at a time when many journalists are rightly being criticised and news itself is under suspicion. Marie Colvin was one who believed in actual facts and real news.