In the evening we are at the Resorts World Arena in Birmingham. Yes, WTF. Formerly known as the Genting Arena. Yes, also WTF. Ok, I fess up, it's the NEC and I've competed at Crufts in this very arena and we are sat approximately where the weave poles were but that's another story.

This gig was supposed to be in May but it was rescheduled due to Roland Orzabal's wife falling ill and then sadly subsequently dying. All that is fine and unavoidable but what was annoying was seeing the concert moved from a Saturday to a Tuesday and from the nice centrality of the NIA to the ruralness of the NEC where it's also £12 to park your car. Presumably all done by the promoter to sell a few extra tickets. We had a hotel booked for May and a night out in Brum planned but it is what it is.

I’ve never really been an Alison Moyet fan and nothing she can do tonight would be likely to win me over and that’s fine. Other folk like her and she undeniably has a strong voice. Each to their own. However I am a little bemused by her set list choices. She plays a lot of recent material, as you would expect, including several tracks from her latest album ‘Other’ from 2017 but seems to eschew her own solo catalogue on which she made her name. 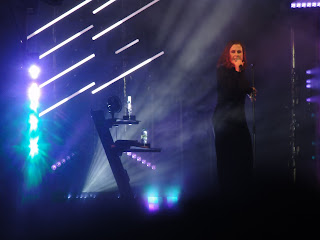 Alf does play her first two solo hits 'Love Resurrection' and 'All Cried Out' but none of her other hits from the 80s and 90s. No 'Invisible', 'That Ole Devil Called Love', 'Is This Love?, 'Weak in the Presence of Beauty' or 'Love Letters' for example.

Consequently she doesn’t really get the crowd going and then seems to realise this towards the end of the set where three of the last four tracks are Yazoo songs. Not that, I for one minute, think this wasn’t a pre-planned move. It suits me. I've always had a soft spot for Yazoo and everyone is on their feet for the closing ‘Don’t Go’.

Tears For Fears also do something slightly unusual, in that they take to the stage to Lorde’s brooding version of 'Everybody Wants to Rule the World' before launching into the original. Presumably this means they approve.

There follows a very polished ninety minutes of entertainment as Roland Orzabal, Curt Smith and their band run through their back catalogue right up to 2004’s comeback album ‘Everybody Loves a Happy Ending’ and even including 'Break It Down Again' from the period where Orzabal used TFF as a solo project following an acrimonious split from Smith. 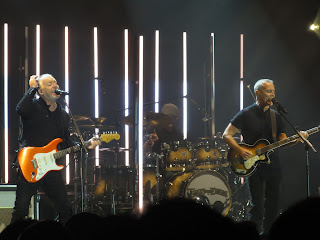 Personally I loved the first two albums but they lost me with the different direction they took with ‘The Seeds Of Love’ album in 1989 and seemingly Smith agreed with me as he was gone shortly afterwards.

Thankfully Smith who sang all the early hits, and presumably Orzabal too, still have a lot of love for the band’s debut album ‘The Hurting’ and Smith comments on how the younger generation were now discovering the band through that album. Here’s a thought. How good would it be to hear them play that album in it’s entirety sometime?

He then introduces a run of four tracks from it. 'Pale Shelter' had already been played earlier and now we get 'Change', 'Mad World' and the amazing 'Memories Fade' sung by Orzabal. 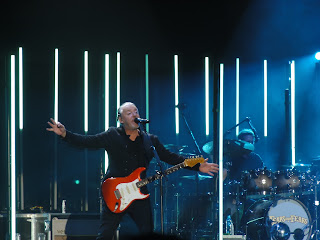 If that is his finest singing moment on ‘The Hurting’ then ‘Suffer the Children’ is probably his second finest. So I am at a loss to understand why he hands over vocals on this epic track to backing singer Carina Round. Yes she does a good job but it’s just not right. She is much better suited to duetting with Orzabal on 'Woman in Chains’ which comes next. 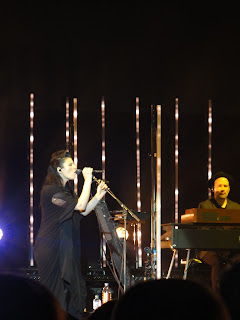 The set then loses it’s momentum with the rather tepid 'Advice for the Young at Heart' and the meandering and indulgent 'Badman's Song' before a set closing 'Head Over Heels / Broken' lifts things to a satisfying conclusion.

Naturally I’d have finished things off a little differently, for a start 'Songs from the Big Chair' was criminally underused tonight. 'Mother's Talk' and 'The Working Hour' would have been nice, then perhaps 'The Hurting' followed by the full ‘Broken’ sandwich for 'Head Over Heels' but I'm an awkward sod to please. 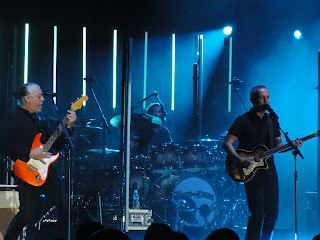 There is then a mad rush for the exits, presumably to get out of the car park. This is something I’ve never understood, just like I’ve never understood people who have never seen the end of a football match because they always leave on eighty minutes. It’s always been all or nothing for me.

The band return to play ‘Shout’ to those who are left, which is still most of us, completing an excellent evening.