I’m on the bus today as it’s too cold to cycle for an oldie like me.

L has her second personal training session but she’s had her fingers smacked already for trying to book a different trainer. Apparently you’re supposed to stick with just one of them whereas L was hoping to try them all and see which one she liked the most but clearly they’re not going to let her size up all the men.

I head over to Leicester in the evening to see the Vaccines. L had tried to get me to consider the train and I did but the last train back that doesn’t require changing at Derby was 10:45 which sounds too early. So I go in the car.

I arrive at the Academy in time to catch the main support Hatchie, having missed opener Jesse Jo Stark.

Hatchie is effectively a person, real name Harriette Pilbeam, rather than the band she arrives with. She’s an Aussie whose music has been described as ‘dream pop’ and she’s even been lumped in with the shoegazing era by some but this sounds mainly like bog standard indie pop to me. Admittedly with some very nice hooks. There’s a touch of the Dolores O'Riordan’s (aka The Cranberries) about her but she seems a bit lost amongst her band. She may need to decide if she’s a person or a band. In the meantime, her sound is extremely pleasant but not life altering. 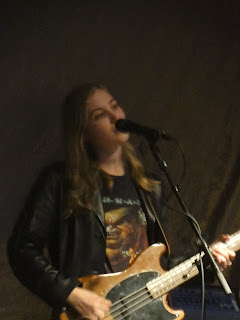 Now on to... ah yes, rediscovering my youth with a band that weren't even around in my youth. Funny that but The Vaccines are the sort of band I would most definitely have seen back then, so I feel very at home. It’s also probably why there are many people of my own generation here and down the front with me as well.

Classic Queen, in the form of ‘I Want to Break Free’, heralds the band's arrival amongst the palm trees and glitter on the stage before they open with ‘Your Love Is My Favourite Band’, from last year’s 'Combat Sports', which is also emblazoned across the drum kit.

Then we're straight into the seemingly never ending list of the infectious songs with which they’ve made their name and all of course with immensely sing-able lyrics. The Vaccines are a engine of entertainment if at sometimes an unsophisticated one. 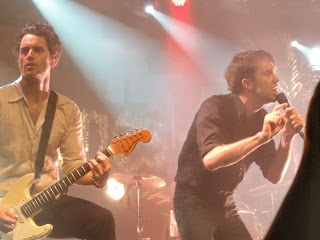 I mean... 'Teenage Icon'? Oh please, then perhaps I should just grow up but instead I bounce along with some twentysomething with purple hair. I’ll grow up tomorrow, maybe.

Lead guitarist Freddie Cowan may never grow up, he’s loving it out there, absolutely loving it. As of course is singer Justin Young who doesn’t say a huge amount tonight and keeps his focus mainly on the music. 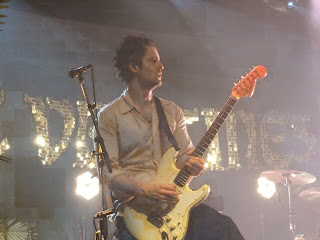 Then 'Wetsuit' wraps itself around the hall. Everybody loves Wetsuit and, as ever, it moves me almost to tears. It reminds me of how old I am but also why I'm here. I’ll grow up tomorrow, maybe.

Justin does tell us that, apparently, their first gig as the Vaccines was in Leicester, although presumably not here, and that no one knew the words to 'Post Break-Up Sex'. That's certainly not the case tonight.

'Nørgaard' is mental, as ever, and then two new tracks ‘Lets Jump Off the Top’ and recent single ‘All My Friends Are Falling In Love’ hint perhaps at a slight change of direction away from the guitar heavy riffs. 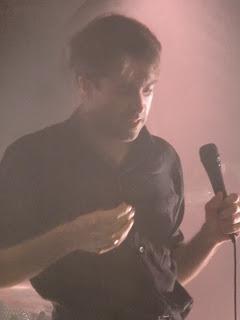 Someone dances into me, holding his drink above his head which he then tips down me. He’s older than me and he apologises, I think. I can’t really hear what he was saying, perhaps he was saying he’ll grow up tomorrow, maybe. I nod my agreement and he goes off to bump into someone else.

The finale, after a frenetic ‘If You Wanna’ and ‘I Can't Quit’ is more measured. The slower ‘Rolling Stones’ closes the set but more pointedly gets the message across that that ‘this one's for you’. 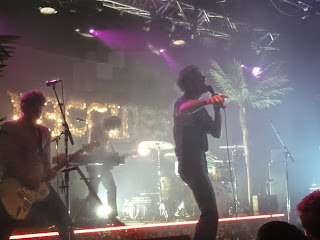 They return with the brilliant ‘Put It on a T-Shirt’ that we didn’t get in Nottingham last year, followed by a rocking ‘Nightclub’ before, as is tradition, ‘All In White’ ends the night.