Tonight I’m at the UK IT Awards Night at the Battersea Park Events Arena in London. One of our customers has managed to get their computer system, which my company provided, nominated in the best Small Business Project category. I don’t suppose we’ll win, for a start we’re up against such illustrious opposition like that well know ‘small’ business, the Royal Bank of Scotland. Miscategorised surely, even if they have fallen on hard times. At first I felt a bit railroaded into going but it sounds a bit of a laugh and I suppose if we did win, I’d regret not being there as I did actually do the majority of the programming on the project. So complete with black suits and dickie bows etc, four of us leave Derby at 2pm to head for the bright lights.

We check into the Holiday Inn in Hammersmith and fall straight into the bar, as you do. The place is crawling with IT nerds, so there must be something going down here tonight... My room is ok, once I work out the secret method of switching the lights on, but no free biscuits. Another cutback. The room does have a rather kinky full length mirror at the end of the bed... presumably that’s to make up for the lack of biscuits and the view from the window but it's not much good to me tonight. 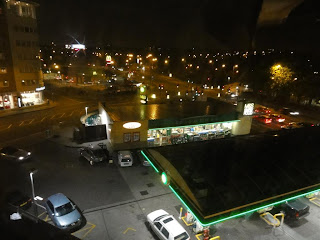 We get a taxi to Battersea but its dark, so we don’t really get to see the sights, the Dogs Home and the Power Station. The arena though is rather impressive and our table is thankfully not too near the back. We're on one of the cheaper tables, so sadly there are no inclusive liqueurs, but still plenty of inclusive wine. In fact the table is just a mass of glasses and bottles, before we’ve even drunk anything. Each place is set with a white wine glass, a red wine glass, a champagne glass, a water glass and a coffee cup. So it looks like we’re eating off our laps as they’re no space left for a plate. 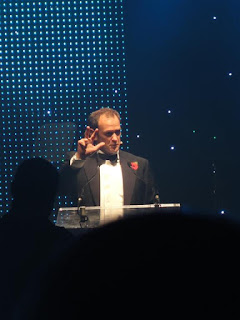 The compare is Alexander Armstrong, who I don’t know a lot about but doesn’t he flog insurance? He’s very good as a compare, very funny and knows when to keep it short and snappy. 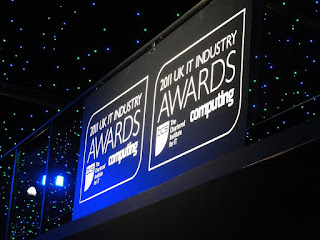 L has asked whether the event is going to be televised or anything via perhaps a web link. Sadly not, coverage is left totally in the incapable hands of Twitter, for which they have put up a big screen to convey all the tweets to the audience. L says she’s going to sign up, so I’ll keep my eye on the screen just in case she gets carried away and starts twittering. The screen is actually a good idea. Along with the many ‘congrats’ and ‘good lucks’ you also get some really thought provoking contributions from the head honchos of the IT industry such as ‘Dave is very drunk tonight on table 46’ and ‘check out the lass on table 7’. Everyone does by the way. 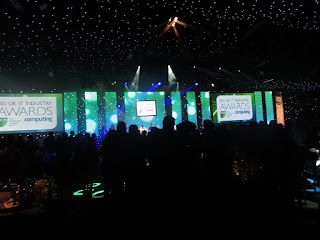 After a two hour meal, e.g. served slowly but very nice, the awards finally kick off at 10pm. Once they start they come apace and our category is the second one to be announced. They announce the two medallists (e.g. runners up) which included the ‘small’ business of the Royal Bank Of Scotland. Don’t bother coming up for it chaps; you collect the medals from the back of the room, perhaps as you get your coats. We’ve barely started cheering their defeat when they announced the winner. Us. OMG. This wasn’t supposed to happen. 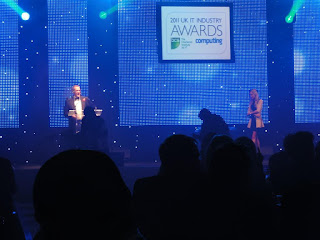 As a representative from the company goes up to collect the trophy the rest of us try to take it all in and to get the champagne opened. The next ten or so awards go by in a blur. Well apart from the frequently nominated HM Revenue & Customs who get roundly booed every time their name is announced, even when they finally win something.

Then awards over, the band strike up to entertain us and it’s time for some photos of the victorious team with the lump of plastic we’ve won. Not bad for a piece of software that’s took me fourteen years to write. Well not continually, it’s sort of evolved. You know one year to write it and thirteen to get the bugs out of it. I hope this increases my Christmas bonus.

Am I drunk enough to try the bucking bronco thing in the foyer, oh go on then. I just hope no one’s videoed it, oh, they have, have they.

Posted by FitForNothing at Thursday, November 10, 2011