With no events, a day off to recover from two nights predominately on the wine. Which is not often a good thing. The two nights that is, not the day off.

Daughter returns from the Skegness Music Festival... or whatever it’s more glamorous name is and we dispatch her back to Sheffield via the train.

In the evening I’m tempted into the gym, which is the second time this month and as I only need to attend once a month to get my ‘cashback’, it was actually unnecessary. 15k on the bike was sort of impressive but 1k on the rower is a bit meagre. Still it all keeps my fitness ticking over.

The whole day though is sort of overshadowed by the awful death of Gary Speed. I saw it first on the BBC website and just went cold. I had watched the guy not 24 hours earlier, as he put in a polished performance on Saturday’s Football Focus, which just made the news all the more shocking. He was only 42.

I don’t mean to belittle anyone’s death but I think it’s fair to say that because a lot of people in the public eye and in particular footballers are not the most likeable of people, the initial shock of their deaths is often followed by a general collective shrug of indifference.

Not so Gary Speed. His death has rocked people because he was a genuine nice guy and a footballer who simply got on with playing football and didn’t trouble the tabloids. If you wanted a role model he was it. When he became a manager, he simply got on with managing and with Wales he was starting to have some deserved success. 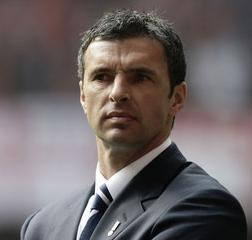 Posted by FitForNothing at Sunday, November 27, 2011